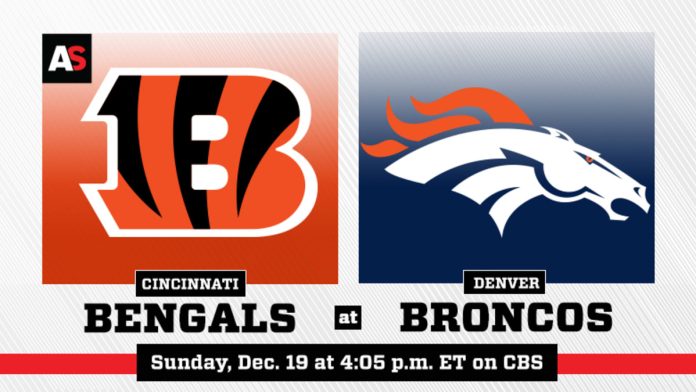 Before I get started on this week’s preview, I’d like to extend my heartfelt condolences to the family of Demaryius Thomas.

Thomas died last Thursday night at the age of 33, of an apparent seizure, alone in his shower. Thomas was an outstanding receiver with the Broncos and played for the team for 9 of his 11 years in the NFL. He was the second leading receiver in Bronco history behind Rod Smith. He was a true gentleman, kind to the core, and everyone loved him for his great sense of honor, giving life, and contagious smile. He is gone far too young. RIP Demaryius. You will never be forgotten by this Bronco fan.

After dispatching a wounded and sub-par Detroit Lions team at home 38-10, the Broncos have one more home game against the Cincinnati Bengals before going on the road for their next two match ups against division rivals, Las Vegas Raiders and Los Angles Chargers. They conclude the season with a slug match against the Kansas City Chiefs, tentatively scheduled for Jan. 9 at home in the afternoon.

The Bengals fought to the bitter end against the 6-6 San Francisco Forty-Niners last week. With no time left in the fourth quarter, the Niners missed a 47-yard field goal that would have ended the game. This occurred after Bengal’s Quarterback Joe Borrow led a last minute 8-play, 87-yard drive to tie the game at 20-20 win 1:21 seconds left on the clock.

In overtime, the Bengals got the ball first and Burrow hit Hideout, Tee Higgins for a long ball that put the Bengals on the Niners’ 49. Ensuing plays left the Bengals with no choice but to kick a 41-yard field goal, to take the lead 23-20. It was up to the Bengal defense to stop the Niners. They couldn’t do it. After the kickoff, it took the Niners  five plays to drive to the Bengals 16, kick a field goal and end the game 26-23, Niners.

The Bengals come into Empower Field at Mile High this week at 7-5 to play the 7-6 Broncos. Bengals Quarterback Joe Burrow is the new darling of the Bengals. They haven’t had a playoff contender quarterback since the days of Boomer Esaison.

Borrow was drafted by the Bengals with the fifth overall pick in the 2020 draft, and was supposed to be the great messiah for the Cincinnati team. He is on course to be just what Bengals fans had hoped for. This season Burrow has thrown 39 touchdowns to just 19 interceptions.

The Bengals have beaten some very good teams this season including the Baltimore Raven, Pittsburgh Steelers, and the Las Vegas Raiders. Falling to the Niners was a huge disappointment for the Bengals and they’ll be angry coming into Denver this week.

If the Broncos can carry the confidence they gained by destroying the Lions last week, it will be a good game. This is one that should be “flexed” by the NFL to a night game, but they only do that when the Broncos are big underdogs.

It will be a close game, but if the Broncos can get off to an early lead like they did last week, they should be able to keep up with the Bengals.

The Bengals don’t stand a chance to win their division, but neither do the Broncos. Both teams will, however, be playing for a wild card spot in the playoffs. Should be a barn burner of a game.

Home field advantage and thin air may be the final decider in this game giving the Broncos the win.