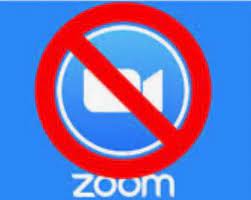 In a somewhat surprising move for towns in the post-pandemic age and  in a gesture rare for municipalities in the region, Green Mountain Falls is retreating from  the Zoom communications age.

Last week, the trustees agreed to no longer use the Zoom (video conferencing) system for their regular board meetings and to go back to in-person sessions.

A few technicalities still need to get worked out, and exceptions may have to occur for out-of-town presenters. Plus, the board appeared eager to explore other online systems, such as live streaming meetings, via You Tube.

But the trustees, and especially Mayor Jane Newberry, expressed concerns with the Zoom option, used extensively in GMF since the COVID-19 epidemic. In fact, for  many months, no in-person meetings occurred in GMF, period.

GMF also sported one of the more impressive systems for a small community, with the help of former clerk Matt Gordon, a video-audio expert.  This helped the town as it weathered through some tough issues, such as the controversy over paid-parking, with detailed presentations occurring from outside consultants.

But the trustees last week waved a red alert flag over what they believe is a partisan atmosphere the system has created. In many ways, their comments almost mirrored common complaints against social media itself.

“Zoom has made us lose our humanity,” said Newberry. “We lose what makes a small town special.”

The mayor believes Zoom meetings, which currently are just one option, are not the best way for the town to operate. “I don’t want us lose our identity to a piece of electronic equipment.”

She favored hitting the pause button on Zoom meetings, at least for the trustees.

Both trustees Margaret Peterson and Katharine Guthrie agreed, but didn’t express quite as strong statements. “Everyone should be here in person,” said Peterson. “Being nameless and faceless” is not the best way for a town to run, she explained. “The majority of business we do, we can do without Zoom.”

“It is good to have people here,” added Guthrie.

The other two members of the board, Chris Quinn and Sunde King, were absent, so couldn’t partake in the discussion.

Planning Commission Chairman Todd Dixon, though, was asked to comment on the no-more Zoom recommendation, and whether this would impact their committee. In addition, Dixon has played a key role in resurrecting the town’s Zoom broadcasts since the departure of Gordon last summer.

Although the town encountered a few initial technical hurdles, shortly after Gordon left, the last few meetings on Zoom have featured fairly good audio quality, according to reports.

Dixon stated that he would prefer in-person meetings, but cautioned against closing the door entirely for remote presenters, as the town may have to incur additional expenses.  He stated that remote presentations sometimes occur for planning commission meetings.

In a previous meeting, local resident Rocco Blasi, who also chaired a former trails advisory committee and served on the planning commission, highly objected to doing away Zoom meetings, noting that more people participated through Zoom than in-person. He feared this would clash with the goal of becoming more transparent.

But several board members have expressed concerns about the bombardment of negative comments aired on Zoom, and contends it has created an unfair assault against staff members.

And if they do use Zoom for certain committee functions  in the future, then no comments will be permitted during the live sessions, according to Peterson. Citizens will have to  submit comments prior to regular meetings.

The board’s anti-Zoom stand, however, has triggered vocal comments on social media in the last week.

“This is so disappointing and frustrating,” stated Brandy Moralez on a post, aired on the town’s political social media page. “They are taking away people’s accessibility, and oversight to what the board is doing. This feels like something that is convenient for the board, rather than something that is reflective of the will of the towns people. And side from that, we are still very much in the middle of a pandemic.”

Similar posts occurred. But some frequent meeting attendees, such as Ann Esch, believe that in-person sessions are much heathier and productive.

Oddly enough, the board and the town administration heavily favored the Zoom system, when complaints occurred initially over the delays in reopening regular government functions last winter and spring. Many complained that such major issues as paid-parking should occur through an in-person meetings.

In an unrelated issue and one that took center stage last week, Peterson and Newberry also expressed concerns over volunteer committee members taking matters into their own hands and not following procedures. This brought back memories of the original dispute between the town administration and the former trails committee.

They warned advisory committee leaders against acting on their own without going through the process of keeping the public or trustees in the loop. They even indicated that such actions are “illegal,” and committee chair representatives and members could get removed. No names were revealed, though, during this discussion.

Newberry stated that the days of “handshake deals” are over. “It is unnecessary and unhealthy,” said the mayor.