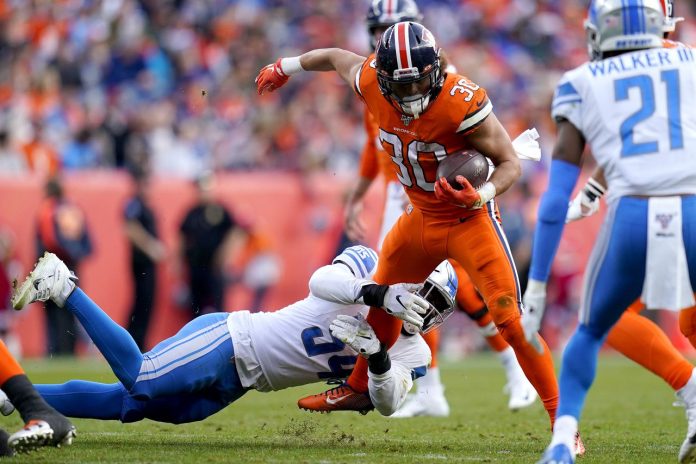 Last Sunday night, the Denver Broncos were once again embarrassed on national television by the Kansas City Chiefs, 22-9.

This is the 12th consecutive loss to the Chiefs. The Broncos squandered a chance to be in a tie for first place with the Chiefs in the ultra-competitive AFC West.

The Detroit Lions come into Denver this Sunday (Dec. 12) to take on the Broncos.  Despite sporting a  dismal record, the Lions are a team that is often taken too lightly.

The Lions managed a come from behind in a stunning win against the Minnesota Vikings in Week 13 during the final play of the game, 29-27. This marked the Lions first win of the season. They’re a meager 1-10-1 on the season.

Seems like this should be an easy win for the Broncos, but the Lions showed grit and determination to not go winless on the season in their win last Sunday.

Lions’ Quarterback Jarod Geoff lit up the Vikings in a shootout last week. He threw for 296-yards, and three touchdowns, going 25-41 in passing, but he did throw one interception. Geoff was aided by Wide Receiver Amon-Ra St. Brown. Brown was instrumental in the final drive that capped the victory for the Lions and caught the final touchdown pass from Geoff with no time left on the clock.

Geoff spread the ball around nicely to eight different receivers also last week. The Broncos cannot afford to look past this game against the Lions.

Once again poor play calling by the Broncos’ coaching staff and a series of costly mistakes by the offense cost the Broncos any chance of success last week. Bronco’s Quarterback, Teddy Bridgewater didn’t help matters by throwing two key interceptions, and a muffed punt by Diontae Spencer set up an easy touchdown for the Chiefs.

So here we sit at 6-6. Better at this point than last year, but still hopes of a playoff appearance have vanished into thin air.

While the Lions have a dismal record, they are still an angry and tough team. The Broncos will have their hands full trying to beat a team that at this point has nothing to lose by pulling out all the stops and passing the ball every chance they get. The downside for the Lions, if they choose to throw the ball 30 or more times, is the Bronco secondary will be waiting with open arms. Last week, Rookie Cornerback Patrick Surtain pulled in his firth interception of the season.

In a sense, the Broncos also have nothing to lose by pulling out all the stops. Will Offensive Coordinator, Pat Shurmer take advantage of a chance to call a few creative plays and abandon the ultra-conservative game he’s been calling all year?  That the 64,000 dollar question.

The Broncos have a better team than their record indicates. The rookie class of 2020 is one of the best the Broncos have had in many years. With a competent coaching staff, they can be a genuine contender next year. This year, not so much.

Bottom line, the Broncos win this one despite taking a physical beating by an angry losing team.