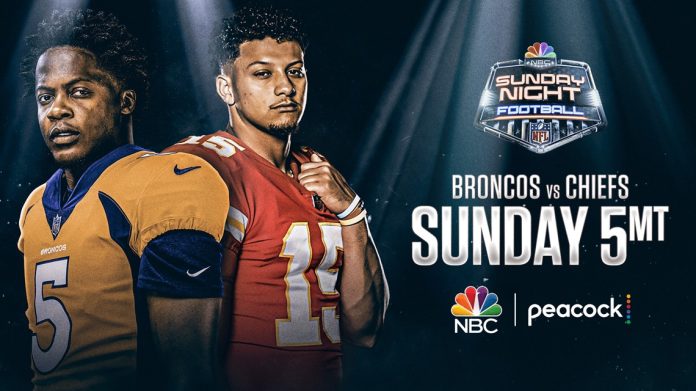 This Sunday is the second week in a row the Broncos face a division rival. The Kansas City Chiefs are just coming off their bye week so they’ll be rested up and ready to go.

An odd NFL rule allows the league to “flex” a televised game whenever they want to. As a result, the Bronco/Chiefs game originally scheduled for Sunday afternoon, was “flexed” to Sunday night.

This game is going to prove to be better than one would expect, given that the Broncos haven’t beaten the Chiefs in six years. The Chiefs are sitting on thin ice with their perennial first place position in the AFC West.

Their leader and quarterback, Patrick Mahomes, is not performing at the historic level we’ve seen over the last several years. Granted, and well deserved, the Chiefs ARE number one in the AFC West. Mahomes, however, is not enjoying the stellar stats he’s seen in the past. This season Mahomes has thrown 11 interceptions compared to previous seasons where he has thrown far fewer. Over his career, Mahomes has thrown 139 touchdowns and only 35 picks.

Between Mahomes, Wide Receiver, Tyreek Hill, Tight End, Travis Kelce, and Running Back. Clyde Edwards-Helaire, the Chiefs have an explosive offensive that can score in a New York minute. Their secondary offensive wide-out are also outstanding.

Here is where stats don’t always tell the tale. The Chiefs’ defense has given up 250-points this season compared to the Broncos giving up 196 points to date. Also, the Chiefs have amassed a total of 281-points on offense for a net point average of 31-net points, where the Broncos have a total of 228-offensive points for a net average of 32 points. That’s one point better than the Chiefs.

The Broncos played good football at all three phases of the game last week against the Chargers. Better than when they shellacked the Dallas Cowboys 30-16 in week nine. The defense played outstanding and the offense scored 21 points. A pick-six by Rookie Defensive Back, Patrick Surtain topped off the scoring at 28 points.

As I mentioned last week, the Broncos are still in the playoff picture. After this win they leap frogged over the Indianapolis Colts in the Wild Card race. A win this week against the Chiefs would put them in contention to win the division, much less a Wild Card spot.

If the Broncos can ride this win into Sunday, they can beat the Chiefs. It won’t be easy, but all AFC West division games are a dog fight. Well, honestly most of them are. The Chiefs have owned the Broncos for five straight years. To beat them on their turf this week would be a confidence builder that money can’t buy. It would also work to Denver’s advantage in the NFL tie breaker rules if it comes down to that.

TMJ Prediction: I went out on a thin limb last week predicting the Broncos win over the Chargers, and the branch held. If I climb a little higher, the limbs get even thinner.

Can’t risk it at this time. The Chiefs come off the bye strong and desperate to stay on top of the AFC West:  The Chiefs beat the Broncos 21-17.