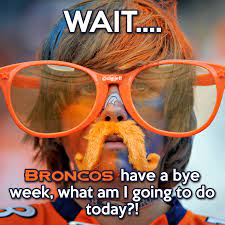 It’s been an up and down season for the Broncos after 10-games, and now they get a week off to reconnoiter and get healthy.

Last week the Broncos were soundly thumped by a team they should have beaten 30-13. The Philadelphia Eagles came into Denver with a 3-6 record and dominated the game from the get go.

After beating the Dallas Cowboys handily in week Nine, it looked like the Broncos finally got in stride, but this was not to be the case. The Bronco defense folded again like a house of cards giving up a total of 222-yards rushing, including 83-yards to Eagles Quarterback Jalen Hurts. The Broncos secondary didn’t fare any better giving up 178-yards through the air, and two touchdown passes.

At this point in the season, the Broncos have to be taking a long look at how they got to this point as a 5-5 team.

Bronco Country had high hopes for this season, but a slew of injuries to key players put the Broncos in a desperate situation. Three of the five offensive linemen last week were either rookies or second string players due to injuries to their starters. Add to the downed linemen, speedster Wide Receivers, K.J. Hamler and DaeSean Hamilton going down early in the season and the recipe for disaster was written on the wall of Dove Valley.

The defense was even hurt worse by the injury bug and a resurgence of COVID hitting the team hard. Starting linebackers, Bradley Chubb, Josey Jewell and Alexander Johnson suffered season ending injuries earlier in the year. Adding insult to injury, the Broncos traded perennial favorite Von Miller to the Rams two weeks ago.

COVID-19 made another run through the Broncos last week and landed Quarterback Drew Lock, Offensive Guard, Austin Schlottmann, and Linebacker Justin Strnad on COVID protocol and out for last week’s game. Offensive Coordinator Pat Shurmur was also stricken with the COVID bug and Quarterback’s Coach Mike Shula was called upon to call the plays last week. While one may have hoped Shula would be better than Shurmur at calling the plays, it wasn’t so. Shula was pretty much Shurmur 2.0.

Battle Heats Up Against Division Enemies

After the bye the Broncos head into the teeth of the AFC West. Five of the next seven-games are against division opponents, Chargers, Chiefs, and Raiders. First up after the bye are the LA Chargers. In typical Charger fashion, they started out tough and are now struggling to keep abreast in the AFC West. That game could go either way if the Broncos can get healthy and come to the obvious conclusion that what they’ve been doing offensively isn’t working. The defense is also going to have to figure out a way to slow down the run game of whoever they play.

The Chiefs are coming back strong after a short slump and the Raiders are proving to be a true playoff contender. Last week the Chiefs played the Raiders in a division showdown on Sunday Night Football and defeated the Raiders. That ONE game took the Chiefs from third place in the AFC West to first place.

Besides the division games, the Broncos play the Detroit Lions during Week 14 and the Cincinnati Bengals on Week 15. If the Broncos can win those two games, and lose the rest of the division games they’ll end the season at 7-10. That record will be the best since Head Coach Vic Fangio took over as coach.

With a little bit of luck, the Broncos may sneak another victory in their head to head match ups with one of the other division opponents, probably the Chargers. That would give the Broncos a final record of 8-9.

If that will be good enough to save Fangio’s job or not will remain to be seen, but with the way the coaching staff as a whole has handled this season, my guess is Fangio and Shurmur will be gone come next season.