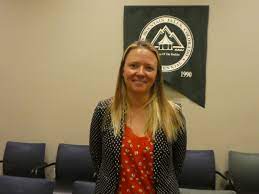 The revolving door syndrome of top officials in Green Mountain Falls continues at a relentless pace.

In a short announcement at the close of last week’s regular meeting, Sprang thanked the board for allowing her the opportunity to serve as the town’s head manager, and believes GMF is on a good track with strong unity established through its advisory committees. She encouraged all committee volunteers to “keep that positive momentum,” and expressed confidence how more aspects of the community are working together. “You have pulled together. You guys have done so much,” said Sprang.

Her announcement, though, wasn’t surprising. The board had an extended executive session at the beginning of last week’s meeting to discuss personnel issues pertaining to the town manager and clerk/treasure positions.

Plus, in the agenda packet, released just prior to the meeting, a posting and job description was compiled for the GMF town manager position.

Still, the timing of Sprang’s departure has raised a slew of questions.  Recently, Sprang had undergone an extensive review of her employment contract, a process in which she received much support from the trustees, who agreed to extend her contract for another year.

Also, her announcement comes on the heels of the departure of former town clerk/treasurer Matt Gordon.

The board was somewhat sketchy about its next plan to fulfill these positions. Sprang, who cited Dec. 10 as her last day with GMF, cited an aggressive recruiting plan to pick a successor.

The trustees complimented Sprang for her role as town manager. She actually was the first person to serve this role in GMF for this long of a period. At the direction of the regional director of the state Department of local Affairs, GMF opted for a town manager form of government nearly five years ago.

The trustees noted that she is leaving the town in much better shape, prior to the exit of  a former town boss.

Sprang, though, emerged as somewhat of a controversial  head manager figure, becoming the face behind the push for a paid-parking system. She also played a role in the dismantling of the former tails committee, headed by Rocco Blasi and the late Dick Bratton, and forming a new parks, trails and recreation subcommittee, along with establishing other more formal advisory groups with more concrete rules.

She was heavily supported by the GMF trustees, who lauded her effort to update the current codes and get GMF more on a proper legal course and to modernize the administration operation. “We are excited about your opportunity,” said resident Ann Esch, a frequent participant in town meetings, who also praised the amount of work Sprang put into her job.

But several local business operators and a score of residents were not fans of the town manager and cited continual communication problems and issues with public transparency. At virtually every meeting, Blasi and few vocal administration critics made public statements against her spending pursuits and argued that the town was better off when it ran with a trustee liaison system. For an extended period in 2020/2021, GMF meetings became one of the best entertainments shows on Tuesday evenings in the area.

In addition, some residents questioned the need for a town manager in Green Mountain Falls.

However, if citizens want to participate in future meetings and make public comments, they will most likely have to make plans to attend in-person.

Last week, the town board mulled the idea of eliminating its Zoom option, citing the technical difficulties involved with its  limited staff.  “It is too much for one person,” said Mayor Jane Newberry.

During the COVID-19 restrictions, forcing the shutdown of town hall, GMF actually boasted one of the best Zoom set-ups in the region, based on video and audio quality. This trend even continued, when town hall re-opened, as it offered both in-person meeting availability and Zoom access. The Zoom possibility definite helped the town, as it had  heated meetings regarding such controversial issues as shutting  GMF trails down and having a paid-parking system.

But when Gordon left the town’s services to return to Brush, Colorado, it encountered problems, as they lost much of the equipment, owned by Gordon.

Todd Dixon, a leading member of the planning commission, who has been helping the town out on a volunteer basis, stated that GMF could explore other options such as live-streaming and U-Tube prospects.

No decision was made by the elected leaders, but they hinted that the days of  Zoom participation are coming to an end.  Newberry stated that current American Disability Act rules do not require the  town of offer Zoom services.