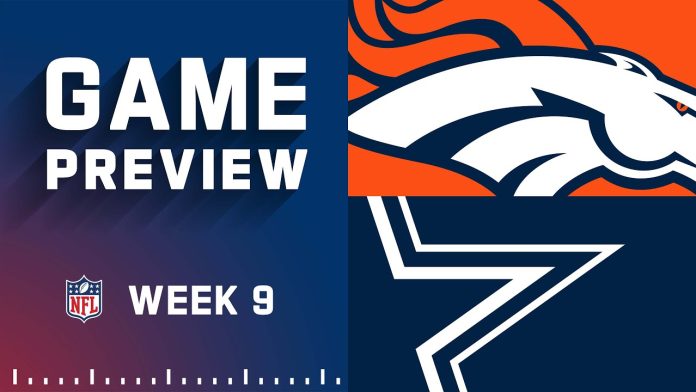 Don’t Bet on a Denver Win

It was a spooky day on Halloween Sunday at Empower Field at Mile High in Denver last week.

After a dogfight in Denver last week, in which the Broncos beat the Washington team with no name, 17-10, they travel this week to Dallas for a showdown with the Cowboys.

The Cowboys have won sixth straight, following their opening game loss to Tampa Bay.  They beat the Minnesota Vikings 20-16 on Sunday Night Football, with an impressive performance by their back-up quarterback, Cooper Rush, who passed for more than 300 yards/

Dallas is a team on a hot streak. Their starting quarterback, Dak Prescott, has completely recovered from an ankle injury he suffered in the 2020 season against the New York Giants. However, in week six of this season Prescott was again sidelined with a calf injury that kept him out of last Sunday’s game.

When the Broncos travel to Dallas, one can’t expect much from a team that struggled to beat a 2-5, at home team last week. With Prescott, who will likely be well enough to play this week, the Cowboys have averaged 34-points per game thus far this season. Between the power running of Ezekiel Elliot and the top quality receiving duo of Cee Dee Lamb and former Raider Amari Cooper, the Cowboys are looking toward an easy home win against the Broncos.

Not picked to be a Super Bowl contender this year by the expert talking heads, the Cowboys continue to be among the teams that would over-perform this year. The Cowboys are a balanced offensive team and their points scored against opponents this season speaks for itself. They know how to execute a screen pass to Elliot with good blocking. This has haunted the Broncos all season and with a depleted defensive linebacker Corp, this will prove devastating for the Broncos on Sunday.

While the Broncos improved last week against the run, allowing 112-yards rushing by Washington, they still allowed 250-yards through the air.

The Broncos face a monumental challenge next week against the Cowboys. Perhaps that challenge will be too much for a beat up defense and a lack luster offense to overcome. If Prescot is good to go, and the Cowboys didn’t suffer any more significant injuries last Sunday night, they will easily beat the Broncos this week.