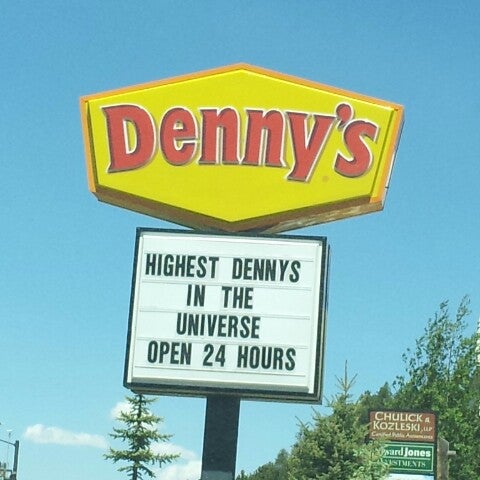 The long-awaited food wait is over!

When the old Denny’s Restaurant off Hwy. 24 in Woodland Park abruptly closed, local residents feared that nobody would be able to afford to purchase the building, and that the area would permanently lose a prime eatery site.

In fact, the building has sat empty for more than four years since Denny’s unexpectedly shut their doors.

However, in the last several months, many locals got curious as the “For Sale” sign on the building was removed.   In addition, much activity was noticed at the former Denny’s site and adjoining parking lot. Rumors abounded that a new restaurant could be returning to the location.

During last week’s city council meeting, the hopes of many residents and community leaders came true, as plans were briefly unveiled for a new full-fledged family restaurant at this site.

Actually, there were two items put on the agenda that had to do with the old Denny’s location and revived restaurant pursuits. This confirmed reports that the city would be gaining another eatery, called the Stuft Food Emporium.

The first mention of the new restaurant occurred last Thursday during the initial posting of future ordinances and hearings. The Stuft Food Emporium staff, and property owner High Country Real estate Holdings, asked council for a public hearing on a request for a conditional use permit to operate a restaurant on the property. The council approved the initial posting, setting the stage for a public hearing on the matter on Oct. 21.

However, the future public hearing decision wasn’t devoid of any debate with questions about a potential conflict of interest, and the licensing of alcohol privileges for the new proposed business.

Council Member Stephanie Alfieri threw the first verbal bomb by asking Mayor Pro Tem Hilary LaBarre why she did not recuse herself since she is related to Pete LaBarre, who owns High Country Real Estate Holdings.

Alfieri brought up a previous meeting that dealt with appointments to the Downtown Development Authority during which the council asked Alfieri to recuse herself due to her personal relationship with one of the applicants.  The councilwoman agreed to take this action.

Alfieri said that LaBarre should follow her example and recuse herself in this matter, since the request involves a property owned by her father-in-law’s company.

LaBarre, though, disagreed and said she hasn’t heard any concerns by members of the community regarding this issue. LaBarre said that in the past, she has recused herself from certain issues in which she received comments by the public.  LaBarre did however note the concerns raised by Alfieri.

This conflict of interest question may be addressed again during the forthcoming public hearing.

The council last week also got a brief preview of the new restaurant operation. Towards the end of the meeting, the council held a public hearing on whether or not to approve a hotel and restaurant liquor license for Stuft. During the hearing, Stuft’s head chef Michael Anderson and two of his employees addressed the council.

Stuft has been in business as a food truck mainly in the Colorado Springs area. According to Anderson, the new restaurant will be the company’s first brick and mortar location. The company plans to have a full-service family restaurant with a bar and a special game room to hold parties for kids.

According to company officials, one factor that makes Stuft’s new business model unique is the fact that they will be serving breakfast, lunch, and dinner. Plus, delivery will be available for all meal times. The restaurant also has plans to connect with the community, and have specials for veterans and first responders.

Members of the council specifically wanted to know what type of food the new eatery would be offering. “We have a little bit of everything for everybody from pastas, salads, fresh cut steaks using local beef and we also have seafood options and children menu options,” replied Anderson.

“The Stuft brand features over-sized plates with crazy toppings. You can look on our Facebook or Instagram pages and see examples like the Hawaiian Burger that has a half pound patty with slices of pineapple, ham and barbecue sauce. We also take a Philly Cheese Steak and put it in a baked potato.”

Not every WP elected leader, though, was keen on granting the new business a liquor license.

Council Member Robert Zuluaga, in fact, was concerned about the new business mixing alcohol with kids. He was then reassured by Woodland Park Deputy City Manager Suzanne Leclercq that it was legal to serve alcohol in family restaurants.

Anderson and his staff explained that alcohol is available at other family restaurants, including Applebee’s and Chuck E. Cheese.

During the meeting, Anderson did not give a suspected opening date. He did say that they were still working on the construction process, and they are currently looking to hire staff.