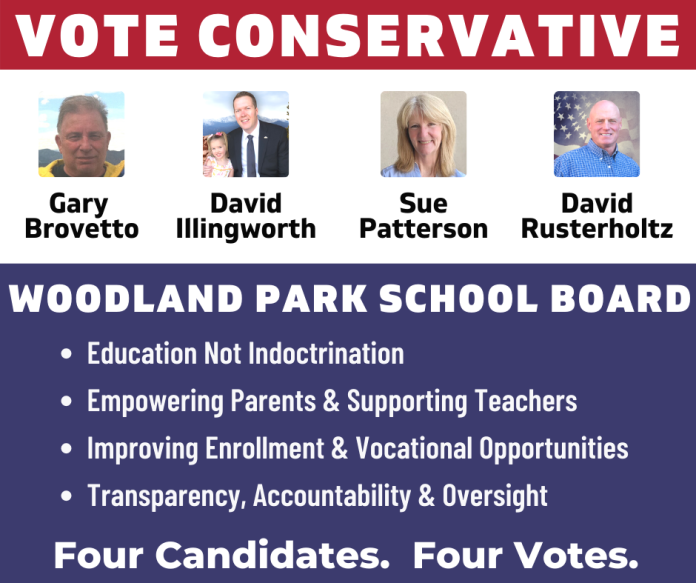 Letter to the Editor from Justin Krimbell

In March 2021, Columbine Kindergarten Teacher Peggy Wallace wrote an opinion column for The Colorado Sun entitled “The election, the Capitol attack and Black Lives Matter come to a kindergarten classroom in rural Colorado”. She laments about conservative Teller County, and most noticeably discusses bringing her views of social justice and race to the 5 and 6 year-olds in her classroom: “…so we brought our lesson to our classrooms and talked about the Black Lives Matter movement…”.

Nine days later, Amy Wolin, another candidate for school board, wrote a letter to the WPSD to “express [her] support for [Wallace] and her addressing current events in her kindergarten classroom…”. Ms. Wolin even expressed her desire for an elevated role for Ms. Wallace, stating “I wish she could teach a district-wide inclusivity and equality program…”. Ms. Wolin’s support of fringe leftist ideology is very public: in 2017 she expressed her support for a kneeling Colin Kaepernick. In early 2020 she changed her Facebook profile picture to an image of radical leftist Chicago Mayor Lori Lightfoot.

It’s not just Wolin that aspires to educate our children based on radical divisive ideology. Misty Leafers’ Facebook profile went dark on June 2, 2020 as she proclaimed her unity with #blacklivesmatter. Even candidate Paula Levy showed her colors when posting a rant just last month, espousing the virtues of the socialist-inspired “equity” over the concept of equality.

The role of the school board is to represent the parents, not divisive rhetoric. Vote Conservative.