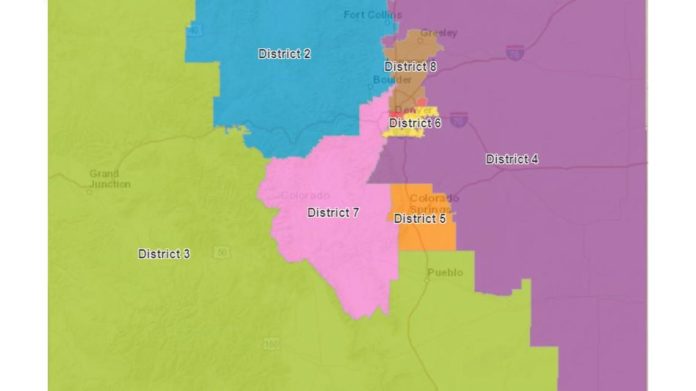 For the first time in recent memory, Teller County residents will soon wave a blue Democratic flag, when it comes to their congressional representation.

The long-standing tradition, linking Teller residents to  Colorado’s District 5 (known as a super, GOP-friendly zone) with staunch conservative representatives such as Congressman Doug Lamborn and former Congressman Joel Hefley, has ended. Gone are the days of the visits up the hill from Colorado Springs by District 5 staffers and leaders and the conducting of meet and greet forums.

Instead, meet your new probable future Congressman: Ed Perimutter of Broomfield, the anchor hub of Teller’s new District 7, now referred to as the Front Range District. This will consist of  Chaffee, Custer, Fremont, Lake, Park, and Teller counties, plus all of the city and county of Broomfield and nearly all of Jefferson County.

This is the final verdict delivered by Colorado’s inaugural independent congressional redistricting commission, which aligned eight statewide districts. The new changes go into effect in 2023, but will play a big role in next year’s mid-term election contests. The final  hurdle is approving the new map involves scrutiny by the state Supreme Court.

County leaders fell short in their bid to keep Teller as part of District 5, a plan that was their preferred choice. For a brief period in the map reallocation process, it appeared that Teller could become part of the West Slope-oriented District 3, and could end up with controversial GOP leader Lauren Boebert, as their Congressional representative. Some local Republican members loved that idea, contending it could give the local region more attention, but that plan was soon axed.

The final map designation wasn’t unexpected, but was disappointing, according to county leaders.

“They (the redistricting commission) had a tough job. But at the end of the day, we and other rural counties just ‘took it in the shorts,’” said Teller County Commissioner Erik Stone.  “We are just going to have to make sure our voices are heard and that whoever is elected to this seat represents the entire district.”

Currently, that role is being served by Congressman Perimutter, who is expected to retain this seat. He has been a member of Congress since 2006.

Stone noted that the final statewide map allocation clearly favored the Denver metro area. Under the realigned District 7, he stated that Teller is aligned with Broomfield, Jefferson County and other urban sections of Denver, in which it has no similarities with.

On the upside, he noted that Teller is included with a few other counties, such as Park, Fremont and Chaffee,  that it does have similar interests and concerns.

Stone cited public lands and veteran services as the main concerns of local county leaders with the changing congressional map delegation.  He worries that these interests won’t receive as much attention as they did in the past, with the county’ ties with Congressman Lamborn.

“It is unfortunate,” said Williams, who stated the commissioners took an active role in the redistricting process that included many meetings across the state. This is a byproduct of the census done every 10 years. Only this time, an independent nonpartisan commission was selected, as part of ballot measures previously approved by Colorado voters.

“It is what is i” added Williams, who stated that county leaders are just going to have to up the ante in their efforts to maintain strong veteran services.  He said  they may have to contact leaders from other districts to make up the difference, and reach across the aisle more to protect the interests of local veterans.

This is a critical concern for Williams, a former combat veteran, serving in Iraq and Afghanistan, who is involved with a variety of veteran organizations.

Ending of a Popular GOP Tradition

From a political standpoint, leaders note that  District 5 was a good mix for Teller County, with their ties to military installations, and such groups as the Pikes Peak Area Council of Governments. Frequent visits occurred by Congressman Lamborn in Teller County and by representatives of his office. Norm Steen, a former Teller County commissioner, even became his district office manager early last year.

Prior to Lamborn, the district was led by Joel Hefley, who was known for his staunch conservative views. In fact, Colorado’s District 5 region was considered one of the safest Republican congressional areas, in the country.  Whoever won the Republican primary was a sure pick for the District 5 seat.

But the numbers didn’t add up, as the Colorado Springs area grew too much, forcing the designation of a single district. The writing was on the wall for change to occur, with a variety of plans unveiled. “We could have lived with being part of District 3,” admitted Stone. This would have put Teller with a huge West Slope rural-oriented district, with the prospects of being represented by Boebert, who has views that are in line with many Teller residents.

The redistricting commission haggled over a variety of maps and compiled many different drafts. Unfortunately, the final approved proposal puts Teller in a district more populated by Denver-area residents.

It still isn’t final, pending a final review by the state Supreme Court, but Teller officials are starting to accept the reality that they will be part of the new District 7.

With the new redistricting plans, all current incumbent officeholders, including four Democrats and three Republicans have been given a definite advantage in retaining their seats, if they prevail in primary races. The map, though, has set the stage for a new highly competitive District4 8 showdown in the north Denver area.