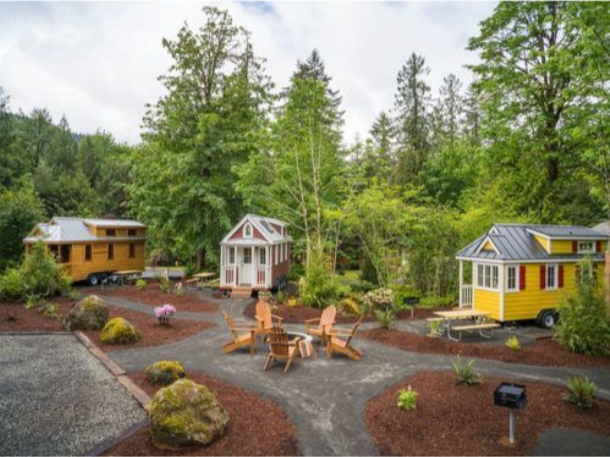 The battle over a future tiny home development, near the Ute Pass Elementary School, has escalated with a bombardment of comments on social media outlets, and an opposition petition drive gaining strong momentum.

At the same time, the developers, who are calling the project Bonsai Village, aren’t retreating and have reportedly closed on the property acquisition. They are part of Life Size Communities company.

On Sept. 26, a supposed meet-and-greet by the project developer, Joe Callantine, at the Sallie Bush Center, turned into a rallying cry for opponents of the development, including many local residents.  More than 200 residents jammed into the center and outside the building, with most expressing their disdain for the proposal. These plans call for the rezoning of 30 acres in Chipita Park, near the site of the former “Field of Dreams” site off Ute Pass Avenue.

The end result could net a tiny home community with 100-plus units, with each site only comprised of about 400 square feet.

Opponents have dubbed the project as a potential trailer park dump that will ruin the community.  They have launched efforts to lobby the Green Mountain Falls and El Paso County governments against Bonsai Village. Several weeks ago, opponents posted a sign off the main road  that has attracted much attention.

At the meet and greet, the developer didn’t really get a chance to make a formal presentation, as he was confronted by boos and a volley of loud verbal complaints. The meeting  deteriorated quickly and  ended much earlier than earlier announcements.

Major questions have persisted over such issues as traffic, sewage, waste disposal, fire evacuation, infrastructure demands and impacts on nearby residents.  “This would be a disaster for the community,” said Paul Zimprich, a representative of the group organizing a petition drive against the project. “There are no guarantees with this development.  We could be talking about 200 to 300 units.”

“It is nothing more than a huge trailer park,” said resident Mac Pitrone, who earlier addressed the Green Mountain Falls Board of Trustees regarding the project.

On the upside, Zimprich said the recent meet-and-greet meeting garnered much opposition to the project, with no less than 200 attendees or people assembled outside the Sally Bush Center. The area was bombarded with protest signs.  Petition organizers said they have collected more than 200 signatures from citizens against the project.

Project critics, including several current and former prominent attorneys, have maintained the proposed development is dead on arrival. But they note that no paper work has been officially filed yet.

However, the project may have a better chance than some anticipate due to the drive for more affordable housing, according to proponents.

The development team has countered recent attacks by questioning the “un-neighborly” tactics of the opponents and contending that the property has now been purchased. They say the residents don’t understand the “tiny home culture” and say this is and ideal site due to its location near Colorado Springs and Woodland Park, while maintaining a mountain feel.  They made a post on social media that has further escalated the battle.

The developer team may have support from leaders who approve of the tiny home concept as a way to grapple with the affordable housing problem in the region.  According to a post in the Green Mountain Falls political social media page,  El Paso County Commissioner Stan Vanderwerf, who represents the Ute Pass region, has supported the tiny home communities’ concept. ‘It’s getting the government out of the way so that an industry can fill a need,” said Vanderwerf,” according to the post.  “I want the county to lead in places like this, and that’s what we’re doing.”

“Guess he has already made his decision,” countered a Cascade resident.

Despite all the preliminary verbal battles, the real arena where the fight will be determined is at the El Paso Planning Commission level. They ultimately have to approve a rezoning bid, calling for the same density levels as permitted for recreational vehicle parks.

No dates have been set for future meetings.