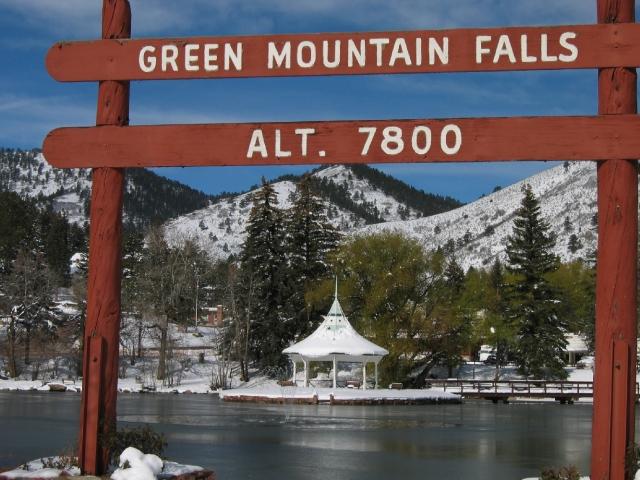 The town of Green Mountain Falls may have lost their signature route to the Catamount Reservoirs of Pikes Peak, but GMF will soon become home to an elite crowd of outdoor, Fitness Court recipients.

In a vote that surprised some residents, the GMF Board of Trustees, in a rather low-key style, unanimously okayed plans last week to accept a $200,000-plus donation from the Kirkpatrick Family Fund, setting the stage of an outdoor, artsy-like free gym, part of an offering from the National Fitness Campaign.

The town will soon sport an elaborate, Keith Haring Fitness Court in its backyard, at the pool park. Contrary to two previous meetings, the trustees didn’t appear skeptical regarding the project and took a very welcoming stance.

For several weeks, some residents have questioned the merits of the project and whether it would clash with the mountain aesthetics of Green Mountain Falls.  The trustees raised a number of questions regarding liability insurance,  Wi Fi service, restroom facilities and possible issues with adjoining residents.

But at the Sept. 7 final hearing, the trustees appeared satisfied with the answers they got to their concerns, and touted the project as a plus for the town and its recreational appeal.

“We have been trying to improve this park for years,” said Mayor Jane Newberry, in describing the Fitness Court location next to the tennis courts.

“This is the Fitness Park,” added Trustee Margaret Peterson.

“There is a value beyond economics,” said Trustee Katharine Guthrie, in responding to the point that the new Court won’t be a revenue-generating facility. “Maybe people will use more of the other facilities at the park.”

The trustees did make a slight change in the color schematics for the Fitness Court. And surprisingly, the art work of Haring, a graffiti artist from New York City,  who died about 20 years ago, didn’t surface at the final hearing. Some of his art, which would be displayed for the initial 10 year-debut of the Fitness Court, received a lukewarm response by many residents.

One of the turning points apparently dealt with research into the project conducted by the trustees themselves.  Peterson contacted officials from two communities in New Mexico, Santa Fe and Las Cruces, which either have Fitness Courts or are in the process of assembling a facility.

Officials from these communities cited some problems with maintaining the concreted gym pads due to weather at extreme times, but were amazed that the town was receiving this facility for free. In essence, the delivered a message to GMF leaders: Don’t give up this opportunity.

Town leaders apparently took this message to heart. Their comments at the Sept. 7 meeting represented a 180-degree turn from several weeks ago, when the project appeared to encounter some resistance.

Most of the opposition was voiced by those making phone calls or writing emails.  Comments at an earlier public hearing, though, mostly favored the project.

Also, the Fitness Court venture is a project in which town leaders and critics, who rarely agree on contested issues, have reached the same conclusion.  Both Rocco Blasi and Lamar Mathews, who have criticized the trustees in the past, thanked the board for accepting this donation.

The Fitness Court should become a fixture for the town for the next 20 years.  It is a completely free outdoor gym, with participants using the facility through apps, and via their smart phones, outlining a variety of exercise programs.

These courts are part of a national fitness campaign, with more than 200 communities across the country sporting these facilities.

Not all of the local news, though, was this positive at last week’s GMF meeting.

The situation over the future of road improvements hit a significant juncture, as town officials announced plans for attempting to secure a  major $104,000 grant from the state Department of Local Affairs.  This grant will help the town to develop an action  plan to improve all local roads, and to begin improvement work.  “This will give us an entire look at all of our roads,” said Newberry. “This will give us an overall plan.”

Town Manager Angie Sprang said if the town receives the grant, much of the work could get started next year. She also hopes to list some of the suggested road improvement projects on the ballot for the Pikes Peak Rural Transportation Authority proposition, which will be decided on during the April 2022 election.

And the future of the Catamount Trail reared its ugly head again. Blasi heavily criticized the mayor and trustees for earlier comments, which put much of the blame on the former trails committee for not pursuing proper procedures in developing the popular trail route between GMF and the Catamount Reservoirs. This was developed, according to Blasi, over a lengthy period and was well-publicized.

This trail was recently shut down due to a dispute with a private property owner. Blasi questioned the stance taken by town leaders and took offense at the comments against the former trails group and  a group of hard-working volunteers. “That simply is not true,” said the chairman of the former trails committee, in referring to allegations that the group developed routes that clashed with private property owners, the U.S. Forest Service and Colorado Springs Utilities.

Sprang conceded this could become a problem due to the departure of former clerk/treasurer Matt  Gordon, who took his personal audio equipment when he recently resigned.  Sprang cited the fact that Gordon was an audio engineer who was well-versed in this art. For months, GMF probably sported one of the best Zoom setups for a small community in the region.

Newberry noted that Zoom meetings are not part of any legal requirements, and were done previously in the wake of COVID-19 shutdown period, when city hall was closed to the public.