The Salute to American Veterans Rally, one of Teller County’s most prestigious events, may become a permanent, annual festival in Woodland Park, based on the views of city elected officials and local veteran group leaders.

Big question marks, though, exist over money and space, according to the festival organizers. Plus, questions persist over whether the event will be headed back to Cripple Creek, the original hosting locale for the event for nearly three decades.

The pro-rally sentiment was voiced loud and clear at last week’s Woodland Park City  Council meeting. City council members and other government officials all agreed that the recent event went very well and that they would like to see it return to the City Above the Clouds in the future. 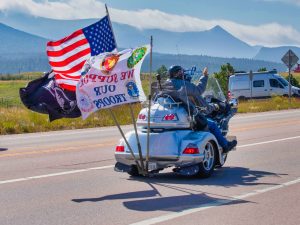 During the rally update at last week’s council meeting, Teller County Sheriff Jason Mikesell was the first to speak and praise the event. He said that at first the rally caused some division, but in the end the two conflicting sides came together to make the rally a success.

“The last time I stepped up and talked to you about the Salute to American Veterans Rally there was a lot of animosity between two sides,” Mikesell told the council. “And I will tell you the event went off without a hitch. I truly think both sides can work together and I think we saw that. We have September 11 coming up and we have a lot of divisiveness in the country going on. A lot of things are kind of upside down now for veterans. And what I saw at that rally was that it did solidify that this community does love our veterans. And the fact is that there is healing that is going on and they are supported.”

He said that he was happy to see how well the city council worked together to put on the event and how well they worked with the county. Mikesell also said that the sheriff’s office worked closely with the Woodland Park Police Department to ensure the event was successful without any “arrogance” or “attitudes.” 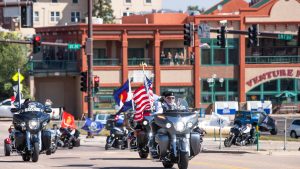 Teller County Commissioner Dan Williams echoed similar views, saying he was glad people on the two sides worked together. He went on to say about how these times are trying for veterans and the rally was a good way to get them together for support.

“I talked to over 100 veterans and some non-veterans that were there and there was a lot of agreement that they would like to come back here next year,” Williams stated. “I can also tell you that Cripple Creek isn’t going to get in a fight with you. I think that it is just like the Farmers Market, there is benefit for both parties. Hotels were filled on both sides of the county.”

In commenting on the event, Wear jokingly said that one business owner in town suffered from the rally.  Wear said. “One local merchant did suffer some fairly devastating carnage at the hands of rally attendees. Elijah Murphy (owner of the Historic Ute Inn) was the victim when 300 pounds of burgers, brisket, and brats were destroyed on his grill in the rally beer garden. And he is still recovering.”

He said that the Ute Inn had their best weekend financially since March 2020. Wear also reiterated that there were no issues to speak of during the rally. He told council that the rally raised more than $7,000, monies that would be given to local veterans.

A Return to Woodland Park as Host Town Still In Question

However, even though the veterans’ community wants the rally to stay in Woodland Park, the event was not as successful as it has been in the past, according to the rally organizer.  Wear said that the rally board is looking at other options, and they have not yet decided if the event will return in 2022.

He said that for the event to be financially successful for the city and the rally organizers, a few things needed to happen. “First off, we need a greater amount of time to plan the event,” Wear said. “We need to collectively decide in the next 90 days or so if we are going to proceed and if so, work needs to begin before the turn of the new year.”

Next, Wear said that the rally needs more room so they can get the Vietnam Veterans’ Memorial Wall back. He said that they need space for more vendors so the event could grow.

Lastly, the event organizer said that they needed more of a clear path without any barriers to put on the rally. He said that some of the hoops they had to jump through hindered the amount of effort they could put into event promotion, which led to a smaller turnout.

All of the city council members made it clear they want to try to keep the rally in Woodland Park as an annual event.