With sports fever spreading across southern Teller, and with the kick-off of another school year,  the following is an outlook at the main fall teams for the Cripple Creek/Victor High School. Go Pioneers. 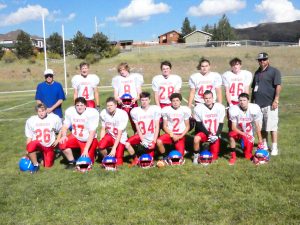 For the last several weeks, the Cripple Creek-Victor Pioneers have been hitting the practice fields hard to prepare for the upcoming season.

The good news is the new Pioneer team consists of a group that played with each other throughout middle school, and in the last couple of years they were winning games.

The bad news is the Pioneers haven’t won a game since 2017. But, according to some local fans, the team just  needs a “W” this year, and their season will be considered a success.  And the way they put points on the board in their opening game, that may happen sooner than later.

Unfortunately, the team had a rocky start due to losing their head coach right before the season started. Luckily, head coach Larry Christison and Assistant Coach Eddie Blaylock have stepped in to take the reins for the 2021 season.

The two coaches said that they like what they are seeing from the team this year. They are still working on basic game skills as they didn’t even know who the starters would be going into the first game. But the coaches both agreed that they liked the team’s spirit and enthusiasm.

The season already started off unusual as their first game of the year, which was supposed to be on the road on Aug. 27, abruptly turned into a home match.

During their first game, the Pioneers came out with a vengeance-like attitude and were able to score some points. This marked a big change from  their winless season in 2020, in which they struggled to score, period.  However, despite a tough fight,  they fell short, losing 41-37 to the Flagler Panthers.

But despite their loss, many local fans thought the team played really well and they were excited to watch them play. It is safe to say that the star of the game was sophomore Myles Durham as he was the team’s yard leader.

Durham rushed a total of 18 times and picked up 141 yards for the Pioneers. He also caught one reception for six yards and fumbled the ball once.

Sophomore Dayton Woods was the coach’s pick for quarterback and he had a decent first game. Woods went 2 for 5 passes for a total of 66 yards and one touchdown. He received a 127.1 QB rating for the first match.

Last week, the team was scheduled to play Miami-Yoder at home, but the game was cancelled due to COVID-19 related reasons. The Pioneers take this week off from play and then they hit the field again on Sept. 17 where they battle the La Veta Redhawks on the road. 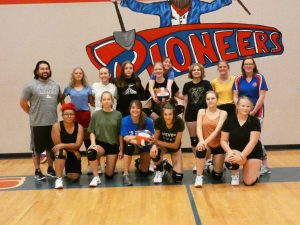 The Lady Pioneers hit the courts two weeks ago and are working towards improving every game. Unfortunately, the girls lost their first three matches, but they are looking to be more competitive as the season progresses.

Team coach Michael Green is optimistic about this year’s volleyball prospects.   “What we have really been working on this year is playing together as a team and learning how to play the game properly together,” the coach said. “So not just skill wise, even though we have been working on that all summer but interpersonally. Like how can we support each other better, how can we lift each other up, and how can we cover for each other all the time. We have been really stressing building the team up inside the sport as opposed to building up individuals who know how to play.”

Green said that there are some key areas in which the team can improve on  throughout the year. “Confidence, a lot of this is new to a lot of them,” Green said. “Our girls tend to be not quite as experienced as the girls on other teams are. And so, building up that confidence and the ability to believe that they can do it has been and still is a challenge.”

The Lady Pioneers this year play a total of 13 games. This Friday, the team travels on the road to take on the Creede Miners. 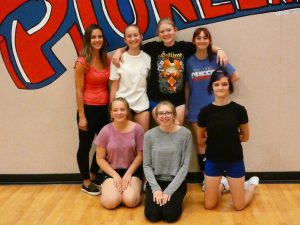 The Cripple Creek Cheerleading team started up at the beginning of the school year ready to help cheer on the Pioneer athletes. This year the team has seven members that will be at every home football and boys’ and girls’ basketball games.

The cheerleaders will go to some road games as well, depending on the school and if they can get transportation.

According to coach Kristie Haines, the girls have been working on their cheering skills since last summer. “We had a camp again this year where we had a company come up and taught us a dance,” the cheerleading coach said. “So, we are working on that for our halftime show and our stunts for halftime and ends of games and just our basic cheers.” 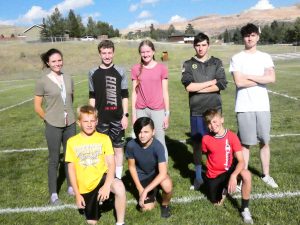 The team’s coach Amanda Wood said  she is excited about the new additions to the team. “I’m really excited that we have a strong boys’ team,” the cross country coach said. “And it is getting bigger as the year gets started so I’m excited for that. We have Chase Coiner and Robert Gantz who have a chance at being very competitive. And not only in our division but they have a chance at going to state.”

Wood cited team play as a top priority. “We actually just went over our team goal and I love it because they ended up creating their own,” Wood explained. “It was to develop a team bond this year by pushing each other to their limits. So, I’m pumped about that because to me cross country isn’t just an individual sport, it’s more about being a team too.”

The coach said that there are many team members who have a chance at being very competitive this year.