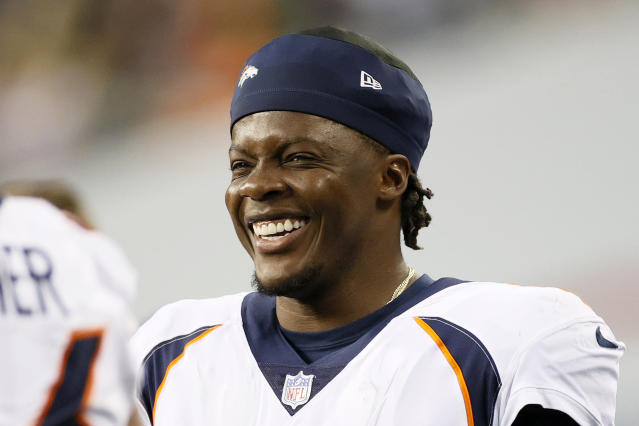 Denver Bronco’s Head Coach Vic Fangio finally made the call in the middle of last week, ending weeks of speculation.

Teddy Bridgewater will be the starting quarterback when the team opens the regular season against the New York Giants, in New York, on September 12. This pick clashes with the predictions made by media pundits and football insiders over the last few weeks.

The battle between Drew Lock and Bridgewater was neck and neck through training camp and into the first two-preseason games. Both guys played well, but Bridgewater won the day by being consistent at moving the ball and scoring in the red zone. They don’t call him “Steady Teddy” for nothing.

Bridgewater’s stats through the two-preseason games were impressive. He was 16-19 passing (84% completions), four-drives resulted in three touchdowns and one field goal. His passer rating was 144.0.

Bridgewater started his NFL career with the Minnesota Vikings in 2014. He spent two-years with the Vikings and led them to a wild card berth in 2015, but was defeated by the Seattle Seahawks, 10-9. In that wild card game, Bridgewater completed 70.8 percent of his passes (17 of 24) for 146 yards on the day.

In 2016, Bridgewater suffered a knee injury during a practice with the Vikings, in what has been described as a “gruesome injury.” Dan Cooper, the Cowboys’ team physician, performed the nearly five-hour surgery on Bridgewater on Sept. 8, 2016. Cooper said, “It’s mangled. You make the skin incision, and there’s nothing there. It’s almost like a war wound. Everything is blown.”

In 2018, Bridgewater miraculously recovered from the injury but was traded to the New Orleans Saints. He spent two lack luster years with the Saints, before being traded again to the Carolina Panthers. His time with the Panthers wasn’t stellar. He threw 15 touchdowns and 11 interceptions.

It seemed his career was over when the Broncos picked him up in April of this year. The Broncos gave their 2021 sixth-round draft pick to Panthers in return for Bridgewater. After the trade, Bronco’s General Manager George Paton said in a statement. “Acquiring Teddy Bridgewater adds competition, experience and a strong veteran presence to our quarterback room. He’s a talented player and leader who’s had success in this league in a number of different situations. Being familiar with Teddy from Minnesota, he’s going to compete and do everything he can to help us win.”

Was this the right move?

So here we are, less than three weeks before the season begins for real. Bridgewater’s pre-season play was awesome, but you have to take into account that both teams he played against were not the first string players. He did show a great deal of poise during those games, especially when he moved up in the pocket during an all-out jail break by the Seattle defense and hit Jerry Jeudy on a slant pattern for a big gain and a first down.

With the Broncos struggling to compete in the toughest division the NFL, will Bridgewater be the guy who can take on the Kansas City Chiefs, the Los Angles Chargers, and the Las Vegas Raiders? Those three teams account for 6 of 17 games this season.

Bridgewater’s strengths are managing the game, short to medium passes, pocket presence, experience, and accuracy. His main weakness is the lack of the long pass. Coach Fangio said, “We have two quarterbacks we can win with.” That doesn’t sound like the kind of confidence I would like to hear from a head coach. You either have “a guy” or you don’t.

So, here’s my take on this decision. Bridgewater has many strengths, but lacking a strong long ball threat is a game killer. Managing a game and coming away with 17-21 points isn’t going to win games against the Chiefs or the Chargers. Lacking a long ball threat, defenses are going to stack the box to stop the run, key on the short zone passes, and pressure Bridgewater with the blitz.

The Bronco defense is going to be in top five this year. Many NFL talking heads are predicting the return of the “No Fly Zone” secondary of the Peyton Manning years. Will it be enough to stop Mahomes and Herbert? Only time will tell. I see a lot of games this year being decided by 3-points or less. It’s cardiac football time again folks.