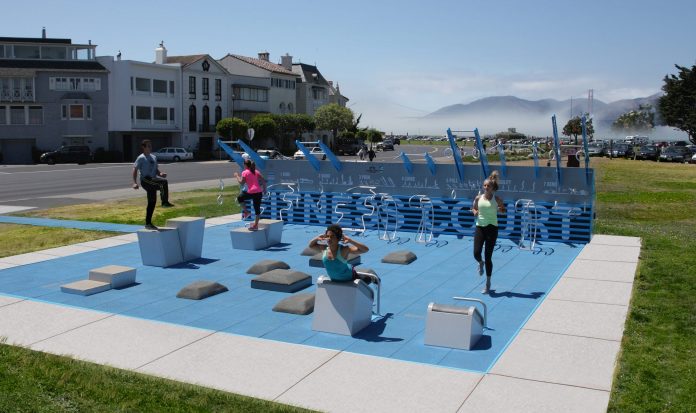 Future outdoor gym amenities and trail access to the most popular hiking route in the area grabbed the spotlight at last week’s meeting of the Green Mountain Falls Board of Trustees.

Despite a lucrative gift to the town of $200,000, plus footing the bill for virtually all operating expenses, the trustees stopped well short of approving a bid for an elaborate, outdoor fitness hub in the pool park area. Instead, a public workshop has been scheduled for this evening (Aug. 24) at 7 p.m. to get more public input on the project. This meeting deals with a grant offered by the Kirkpatrick Family Fund, for installing the Keith Haring Fitness Court, endorsed by the National Fitness Campaign, next to the tennis courts and keeping it there for 20 years.

In addition, town leaders, in a move that surprised some, opted to keep the Catamount Trail closed indefinitely. Instead, they instructed  the local parks, recreation and trails subcommittee to reroute a section of the trail that clashes with the rights of a private property owner onto GMF land. No timeline has been provided regarding when the full trail, one of the most popular hiking routes in the region, will reopen.

These were the highlights of a rather lively meeting, which concluded with a lengthy executive session on the Catamount Trail. The meeting even touched on the subject of licensing and taxing future retail marijuana shops (see related story).

Plans for a mega, artsy Fitness Court in GMF reportedly have encountered some opposition by town residents, who have questioned any cost incurred by the government for maintenance and how it would fit in with the town’s look. An earlier presentation by Jesse Stroope, a representative of the Kirkpatrick group, got a fairly enthusiastic response by the trustees.

But in the last few weeks, the trustees conceded that many questions have arisen by citizens.  “It is a huge commitment,” said Trustee Katharine Guthrie, in regards to a 20-year  plan change for the pool park. “I would like to get more feedback.”

Guthrie admitted that she and other trustees have been bombarded with negative comments about the plan, despite the impressive gift gesture.

Questions were raised last week about relocating the proposed outdoor gym to possibly another location on private land.

“We are feeling a little uncomfortable. We would like more public input,” said Mayor Jane Newberry. ‘We are hearing  mostly negative comments.”

Trustee Margaret Peterson agreed with these sentiments and suggested establishing a public forum.

Town leaders may know what direction they are headed, following tonight’s public meeting.  The project was once mulled by the city of Manitou Springs, which decided not to fund the Fitness Court. That opened the door for the Kirkpatrick Family Fund group, which has backed many projects in GMF, including the forthcoming James Turrell Skyspace installation

Stroope told the trustees last week that funding the grant would represent a gift to the town. He stressed that this would be a huge recreational benefit to GMF, with basically no costs to the local government. He cited time as the  main hurdle, for the grant to move forward.

Some of the earlier concerns regarding additional maintenance costs were addressed at last week’s  meeting to the satisfaction of the trustees and the town administration.  The main concerns now  deal with the impacts on the parks and if the project would blend well with the character of GMF.

Plus, a few concerns have developed over using the  graffiti art of the late Keith Haring, a central part of the project.

This marked the first time a bid by the Kirkpatrick group has encountered so much opposition from residents regarding one of their artistic/recreational bids.

The trustees, though, believe if residents get a chance to review the project in more detail, they may not have a problem with the plan.

In other major recreation updates, the GMF Board of Trustees, following an executive session last week, instructed the parks, recreation and trails subcommittee to pursue the rerouting of a contested part of the Catamount Trail onto Green Mountain Falls property. This area is at the heart of a dispute with a private land owner, with the town administration deciding to shut down the trail until this matter gets resolved.

In their announcement, the  trustees came out verbally swinging in criticizing the actions of the former trails committee. “We have to address the ‘White Elephant’ in the room,” said Newberry. “That is the former actions of the (former) trails’ committee. That is why they were disbanded. They are no longer associated with the town.”

She cited five instances of the former committee encroaching on the rights of private property owners, the U.S Forest Service and Colorado  Springs Utilities, in their trail building work and other activities.

The mayor cited huge costs if the town tried to go through the process of eminent domain in declaring the disputed area of the Catamount Trail legal. Plus, she stated that town leaders have an ethical problem with taking this action. “This is a rather immoral thing to do to your neighbor,” said the mayor.

In a later interview, Newberry believes that the disputed trail area, reportedly located on the Catamount route between the Thomas and Bratton trail areas, can be rerouted onto GMF land without too much trouble. She didn’t provide a timeline, but believes this is the first step that should be pursued. As for concerns with the work of the former trails’ group, she conceded that part of the problem  could be attributed to “over-enthusiasm” about certain trail projects that didn’t go through the correct process. This opinion was highlighted in a GMF trustees meeting last spring regarding the current Catamount property dispute.

Rocco Blasi, the chairman of the former trails group, contends the Catamount Trail was part of a major project with Volunteers for Outdoor Colorado and even involving some funding from Great Outdoors  Colorado (GOCO).  He said the trail, which takes hikers to such spots as the Garden of Eden Meadow and Catamount Reservoirs, was constructed over a five year period and officially opened in 2001.

Blasi completely objects to the stance taken by the trustees, and  believes they blindsided local residents and trail leaders with this action.

This point of the trail being constructed 20 years ago was emphasized by a local resident who addressed the board at last week’s meeting in a rathe passionate manner.

“The trail belongs to the town,” said the resident, who called it fiscally irresponsible to keep the Catamount route closed.

The big question remaining: When will the Catamount Trail reopen?  Alternate routes are available to reach the reservoirs, but many visitors have expressed much bafflement over the situation.

The Catamount Trail was constructed originally as a way to avoid safety hazards that occurred when people tried to reach the reservoirs by climbing up Catamount Falls. This route, known as the Orange Dot trail, often caused many accidents and falls.