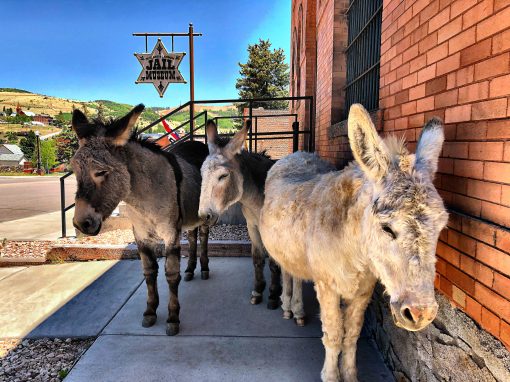 Well, it’s no secret that the last year and a half has been tough on everyone, even the Cripple Creek donkeys.

Sure, they may seem happy while they carelessly wander the local streets, but they have felt the pandemic struggle as well.

Every year, the small gambling town takes a weekend to celebrate its history and honor the city’s famous four-legged creatures that helped build the town. And the event is actually a local favorite to many, and it is one of my annual go-to festivities.

However, last year many including myself were sad when the Donkey Derby Days event had to cancel for the first time in decades. The donkeys too felt the pain as the annual celebration is the Two Mile High Club’s main fundraiser to provide care for the beloved animals.

There was even talk at the last council meeting of generating funds for a Hay Barn for the donkeys and having collars for each of the animals.  The town donkeys have been rated as the top personality in virtually every Best Of contest sponsored  by TMJ.

Luckily, locals and out-of-towners alike all pitched in this year and donated to the club to make sure the poor donkeys had everything they needed to survive winter. Once things opened back up it was unclear when or if Donkey Derby Days would return due to funding issues and pandemic concerns.

But it just goes to show that all good things are worth waiting for. Even though the event didn’t take place in June like it normally does, it will be kicking off in town this weekend as Donkey Derby Days turns 90 years old.

When I was a kid Cripple Creek had no gaming and it was quite a different town. It was more about the history and the town was filled with cool stores with a Wild West theme.

The train back then ran all the way to Victor and they would have actors ride up on horses with bandanas on and pretend like they were robbing everyone on the train (super scary when I was five). But, for better or worse, times have changed. You can imagine the liability these days if the train still had fake robbers?

Before gaming, Donkey Derby Days was an event that would attract thousands of people every year, and the race between Victor and Cripple Cree was a real treat.  Now, in the post-gaming era the event is still exciting with a slightly different flavor, and it brings people to town to shop, gamble, and eat.

When I worked in Cripple Creek years ago, it seemed like Donkey Derby Days was the one event that everyone embraced and most casinos and businesses in town entered teams in the business donkey contest. One year I even entered with three other people I worked with, and we are proud to say that we took home the title. Even though we technically won by default because one team broke the rules by not having all racers cross the finish line with the donkey, we still embraced it as a victory.

The hardest part of the race is keeping the donkey moving. The animals, though, adorable, can be known to be quite stubborn.

Anyways, many locals are thrilled that after a long hiatus the event is returning this weekend. The celebration will look a little different this year as the roads in town will not be closed, but there will be different things to do all across town.

The donkey race will still take place, and yes don’t worry, there will still be a beer garden!