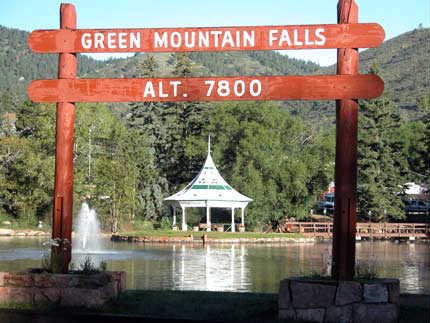 In a special meeting, the Green Mountain Falls Board of Trustees have appointed a long-time resident and volunteer to serve a vacated elected  seat.

Sunde King, who has been involved with a slew of local organizations, such as  Church In the Wildwood, the Pikes Peak Chamber of Commerce and the  Sallie Bush building effort and other area groups, won the top nod to fulfill  the remainder of the term of former trustee Dyani Loo. Loo, who was heavily involved in local trail education projects, recently stepped down, citing time constraints. This opened up another slot on the five-member board.

As a result, King will join fellow trustees Margaret Peterson, Katharine Guthrie and Chris Quinn and Mayor Jane Newberry at the leadership table.

The trustees wanted to do the appointment in a way that would avoid having a special election.

The trustees interviewed both candidates extensively at the close of their regular meeting on July 20.  And both candidates were quite impressive, according to the trustees, who weren’t short on questions regarding some touchy subjects. Topics ranged from conflict of interest concerns, top community issues, social media problems, the bombardment of false rumors and big financial challenges. Unfortunately, few members of the public got to witness the  public interviews, as they occurred around the midnight hour on July 20. This followed an exhaustive  marathon session that is still the talk of the town.

For much of the evening, the trustees got bogged down on the first stage of a major code rewrite adoption, and amending the contract of their town manager.  They opted to conduct their public interviews, in a separate workshop at the close of their regular meeting on July 20.

In a special meeting last Tuesday, King got the unanimous pick, as the trustees want Dixon to complete his work on the planning commission, and especially the code rewrite project. Dixon, though, is a frequent speaker at trustee meetings, and has emerged as one of the few vocal supporters of the town’s effort to generate more revenue through a paid-parking system.  He often addresses the board on a variety of issues and even helped fine tune the town’s current paid-parking contract.

In the trustees’ interviews, both contenders for the position, cited better communication as a key concern. They both touted their own resumes and emphasized the skills they could bring to the table. King made a plug for her financial and legal skills.

Dixon, by comparison, stressed the financial challenges facing the city, and suggested that some budgetary changes may have to occur. He also wants the town to invest more funds into fire mitigation. His  interview on July 20 was quite lengthy.

King made it clear, though, she is not a fan of social media.  She has  been involved with many of the same organizations that have been served in the past by the some of the current trustees.

King will serve as a trustee until the current term for this seat expires in 2024.

Next year, though, could become a pivotal one for local elections, as that is when the position of mayor, a seat currently held by Jane Newberry, will be decided.  The town has really not had a competitive election for this seat for several years.

Despite the political clashes that have occurred recently in GMF over such issues as paid-parking, traffic, trail access and the town manager situation,   last  Saturday’s 83rd Bronc Day celebration was cited as a huge success. At least for half a day, local politics took a time-out.

Good crowds bustled in town throughout the day, as the annual festival sported a variety of activities, including the infamous dunk tank, games, contests and live  music.  The vendor booths were quite busy, until the afternoon rains struck. Even representatives from the paid-parking contractors, Interstate Parking of Colorado, attended and were prepared to answer questions and address complaints from local residents.

For the last several weekends, Interstate representatives have been interacting more with local residents, and helping them to register for their free-parking privileges.  Green Mountain Falls set a new standard in the area, when it opted to experiment with a paid-parking system for visitors downtown on the weekends.

However, parking was free for both local and out-of-town visitors during Bronc Day.

This is one of the few festivals in the region that has survived the impacts of COVID-19. Even last year, when another wave of COVID-19 occurred, the Bronc Day festival was a go.