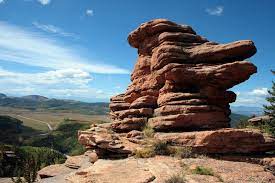 In a big victory for area hikers, tourists and just casual walkers, the popular Horsethief Park trail, located off Hwy. 67 between Divide and Cripple Creek and right next to the historic Midland Terminal Railway  Tunnel, will remain open, at least throughout the summer.

“I’ve spent these years trying to negotiate and the very last thing I want to do is to block the trail,” Locke said, according to an article in The (Colorado Springs) Gazette.

This announcement is a big plus for outdoor and tourism advocates as the trail is regarded as one of the most accessible in the region, and one offering a prime network to routes around Pikes Peak and leading to Pancake Rocks and Horsethief Falls.  The trail is part of the nearly 100-mile Ring  The Peak loop. It also serves a  great stop for tourists, who often check out the historic tunnel and then trek up the Horsethief route for a bit.

It is a common site to see visitors and motorists pulling over at this prime area, next to the tunnel, and testing their hiking skills on this trail.  For many lowlanders, the route is considered rigorous.  However, in most hiking guides, it is listed as moderate.

The possibility of this trail getting closed caught many outdoor advocates off-guard. A previous report indicated that the trail was scheduled for closure by the U.S. Forest  Service due to a land dispute, with officials urging hikers to respect the closure signs.

“It’s unfortunate, and these things happen from time to time,” said  Susan Davies, the executive director for the Trails and Open Space Coalition. “What just happened will prohibit access from the next segment.”

The situation, though, is far from resolved. Locke has proposed a land swap for a 600-by-100 foot slice of land that includes 76 feet of the Horsethief Park trail in exchanges for a 150-by-475-foot plot of land at the other edges of his property.  He contends that this plan would create a win-win for all parties involved.

The Forest Service is mulling a variety of options, including a land exchange.  Another possibility is to establish an easement rerouting the trail, according to U.S. forest officials.

In any case, area trekkers don’t care about trail politics, a growing problem in the area, and want to keep the route open.  Plus, if the trailhead was closed, or even if the impacted section was shut, enforcement of this action would  be  very difficult.

Locke has agreed to re-evaluate access to the trail at the end of the summer.