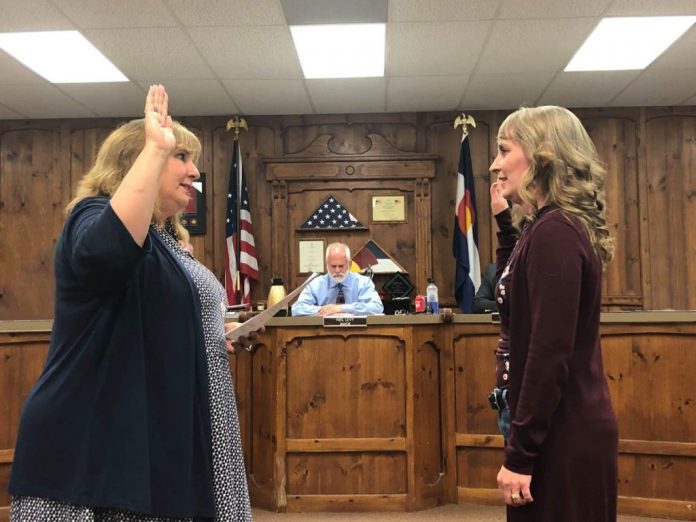 Questions Raised Regarding Selection of Nakai

In a move that shocked many local residents and raised questions, a new Woodland Park City Council member has received the nod and has already started her official duties.

Catherine Nakai, who ran unsuccessfully for council in a special election last November,  took the oath, following her appointment at the beginning of Thursday’s meeting.

Mayor Pro Tem Hilary LaBarre presented the topic at the start of the July 15 regular session. According to LaBarre, the topic of appointing a new council member was brought up as a way to prevent the city from being forced to hold and pay for a special election.

Recently, Council member Stephanie Alfieri submitted her resignation due to health problems, but then rescinded it. The council appointment came about as a precautionary measure should Alfieri choose to resign down the road.

“We have a council member (Alfieri) that has had some health issues and has a potential of resigning,” LaBarre explained. “If (she resigns), it will trigger a special election, which will cost the city around $20,000 or more in election tax dollars. So, in order to prevent that, just in case as a backup, council has spoken and agreed that we will appoint a council member this evening.”

According to LaBarre, the council has a right to appoint a council member to a vacated seat when the majority of the leaders see it as a proper solution. However, in the past, the council has always gone through a formal application process, requiring applicants to submit an inquiry for the seat.

For example, when former Mayor Val Carr passed away, the city advertised that the mayoral position was open and candidates were asked to submit applications. The applicants then made presentations before the council and answered a slew of questions.

An Unprecedented Move By  Council

This time the council did not request an application process, and  they just decided to appoint a council member. This is an unprecedented move, as in many cases, the city has received more applicants for appointed council positions that during a regular election. “Council has the right to appoint a member at any time depending on the situations even just off the street,” LaBarre said. “So, we are following the law we are following the rules.”

She went on to explain that since the council is already operating at a reduced level, due to Val Carr passing away and Jim Pfaff resigning, the situation is somewhat critical and prompted immediate action. She noted that if there are three vacant seats, the city’s charter would require them to hold a special election this November.

However, the council can only make one appointment in a year period, so if they made another appointment such as picking  LaBarre as mayor, the city would also have to call for a special election. LaBarre reassured the public that no more appointments would take place this year,

So, the city most likely will not hold a special election before the regularly scheduled election next April.

“Historically, we have taken applications for open positions, but is a historic procedure we have had not a legal procedure,” LaBarre said. “So, we don’t have to take applications. We are allowed just to appoint someone should we choose to do that. So, after speaking we have made the decision to appoint someone to save the city the headache of a special election just in case. We are not saying it will happen but there is a potential that it could happen.”

LaBarre explained that the way they chose the member was to go to the most recent election and pick the person who had the second most votes for the council position. Catherine Nakai was picked because she lost a run for council last November to Stephanie Alfieri, but clearly snagged the runner-up spot.

However, after LaBarre’s presentation, Councilmember Robert Zuluaga said that he was not part of the discussion and he had not been consulted about the matter. LaBarre disagreed and said that she did talk to Zuluaga about the possibility of an appointment. But Zuluaga said he was not told who they would be appointing, or how that decision would occur.

Zuluaga said that he had talked to Alfieri and that she did submit a resignation to city council. But, when she found out that her resignation would cost the city $20,000, she rescinded her resignation and said she would rethink it.

He made it clear that Alfieri’s initial resignation was what triggered the appointment, even though it was rescinded. “Looking at that we had some unconventional actions during our last meeting,” Zuluaga said. “So, seeing that I’m going ‘gee whiz’ is a special election such a bad idea? Given the fact that we are stepping out of procedure a lot from what the public is used to and are they well informed? So, I am going to say that I am a little reserved about this selection and I am for a special election.”

When the vote came, Nakai was voted into council with a 3-2 vote and she was sworn in that night by the city clerk. Zuluaga and Alfieri voted no on the appointment.

During the council reports, Alfieri said that she has had tough times the last couple of weeks due to a car accident and catching a “vicious cold.” She then thanked all of the council members and city staff for reaching out to her.