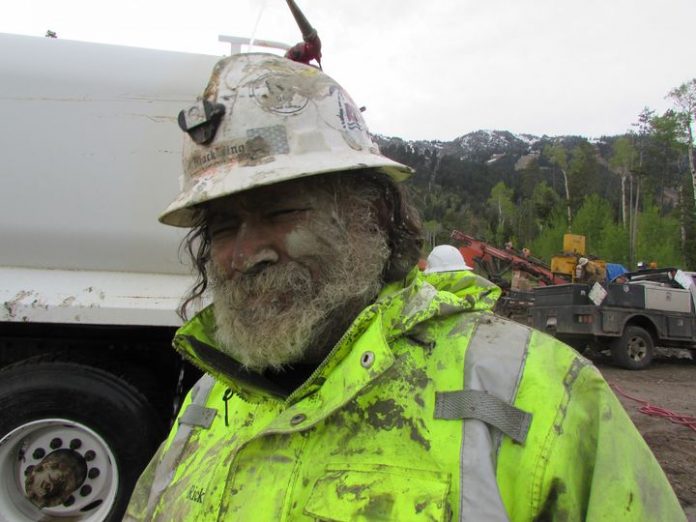 Teller County has lost another local legend as a result of a tragic accident.

A remembrance ceremony last week in Florissant for “Rick” Batista, 69, attracted hundreds of residents. Besides his notoriety as one of the area’s more colorful characters, Batista was well-known as a construction contractor, military veteran and a national dynamite expert.  Unfortunately, his life came to an abrupt end.

On June 29,  Batista, was killed off of Hwy. 50 near Little Blue Creek canyon when a giant rock fell and crushed him. The accident received considerable media coverage in certain Colorado newspapers.

Batista, and his company Black Wing Blasting, had been working with American Civil Constructors Mountain West to make a section of Hwy.  50 between Gunnison and Montrose safer for motorists. The project included stabilizing slopes by installing a rock fall catchment fence and utilizing other methods.

When the accident happened, Batista was conducting work inside a mini-excavator when the large rock fell above him. The rock that crushed him caused Batista to suffer from multiple traumatic injuries. He was then pronounced dead on the scene by the Gunnison County Coroner.

The incident sent waves of shock through the community as Batista was known and loved by many local residents. He even had close ties with some staffers and  families of TMJ  News. “Blaster Rick” as he was known by many locals, was a colorful character that could be seen enjoying himself at local restaurants and saloons. He ousted anyone in the story-telling genre. And anyone in the construction industry in Colorado more than likely had worked with Batista at some point.

On July 5, a funeral was held for Batista at the New Dawn Hope Ranch in Florissant. Then, a potluck celebration of life was held at The Thunderbird Bar and Grill in Florissant.

The funeral generated a capacity crowd. Later in the day, the Thunderbird was packed inside and outside with people paying their respects.

During the funeral, Batista’s good friend Keith McKim gave the eulogy, and told the story of the local legend’s life. McKim was preceded by friends and family speaking on Batista’s behalf and a slide show. During the slide show there were several pictures and videos of Batista blowing things up.

Batista was born in Manhattan, New York on Feb. 24 1952. At a young age, he got a job with a company that dealt with explosives. Batista was then drafted into the Army and he decided to volunteer to be a Green Beret in the Special Forces unit. Batista also eventually joined the elite “Delta Force.”

After he got out of the military, since he continued to work with explosives while he was in the service, he got a job as an explosive engineer with Jefferson County. After a few years, Batista then decided to open up his own company Black Wing Blasting in 1982, which he ran with his family for over 40 years.

Through the years, Batista and his crew worked on blasting jobs all across the world. There was no job that Batista didn’t think he could do. During his career he used explosives to open up roads, tunnels, and he even demolished an entire amusement park one time.

Bastista also played a key role in the construction of the Wildwood casino, which at the time, was the first new gaming project built from scratch in more than a decade.

He was well-known in the industry as he taught classes about explosives at the Colorado School of Mines in Golden. He also helped write curriculum for many of their blasting courses.

During the funeral,  it was announced that Rick’s sons, Kevin and Jared Hartzell, would be taking over the business along with other family members. Even though his life was cut too short, Batista died doing what he loved to do.  At the funeral, McKim said that he “went out with a bang.”