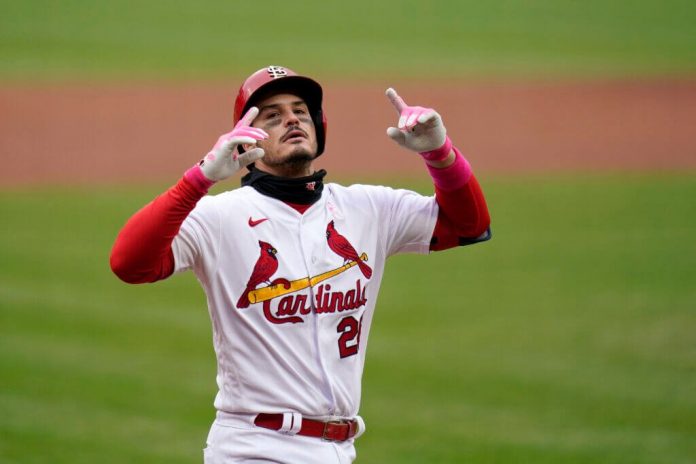 Up the hill a little-ways, it’s home-sweet home for the Colorado Rockies.  Despite the team’s four-place standing in the ever competitive National League West division, the team is playing great at Coors Field.

Prior to press time,  the Rocks won four straight games, and were one pitch away from making it five in a row.  But unfortunately, the St. Louis Cardinals had other plans Friday evening and devastated reliever Yency Almonte.  The fans were on their feet as rookie reliever Justin Lawrence was ONE PITCH away from wrapping up the game with a 3-2 Rockies win.

It didn’t happen, stopping the Rockies winning streak at four games. The Rockies actually lost by a 9-3 margin, as they got scorched in the 10th.  Ouch.

The long-awaited return of Nolan Arenado , though, capped last week’s action. Arenado was the team’s marque third-baseman for six-plus years, and became their star player.

But like many stars for the Rocks, Nolan didn’t like the top management’s casual attitude about winning (he wanted to see the team try to obtain more top-rate free agents) and opted to get traded and exit from his contract. The Rockies fulfilled his desire, a move that shocked fans and probably led to the ouster of former general manager Jeff Bridich.  The relations between Arenado and Bridich were about as cordial as those between fans of Donald Trump and Joe Biden.

Last week, Arenado, who now plays with the Cardinals, came back to Coors for the first time since leaving last winter. Much to his surprise, the fans, in a very classy act, gave Arenado a rousing, standing ovation and forced a slight delay in the action.  Arenado was always known for his amazing intensity, heroic fielding and clutch hits.  And he wasn’t one to back away from fights, if necessary.

I witnessed the time Nolan charged a pitcher from San Diego, after he believed he was the victim of an intentionally-thrown ball at his head.  Arenado came charging full-speed with a bat in his hand, antics that led him to get suspended for about a week.

That particular game nearly turned into a riot and created a genuine hatred between the Rocks and Padres.

Arenado’s return marked on the of the highlight games this season. Besides giving Arenado an impressive coronation, the Rockies pulled off a walk-off win with Brendan Rodgers striking a two-run homer.

This win, coupled with the team’s sweep of the Pittsburgh Pirates, ignited life into the Rockies. In fact, Rockies pitcher German Marquez nearly hurled a no-hitter. This near-record accomplishment was spoiled in the ninth inning, but he earned a rare shut-out.

But the Rockies Party will be short-lived.  Shortstop Trevor Story is next on the trading block. Expect him to be gone by the end of July. There are even rumors about another fan favorite, pitcher Jon Gray, getting traded too.

Yes, 2021 is a rebuilding year in Rock Land, so drink a cold beverage, enjoy the scenery and more.  Face it, you are not going there for top baseball anymore.