Attraction to Serve as “Place to Unwind, Unplug and Soothe Your Soul”

A new ambitious artistic venture, aimed at putting Green Mountain Falls on the international map and  attracting year-round visitors, kicked off Saturday with a festive, well-attended ceremony, capped by comments by community leaders and project proponents. 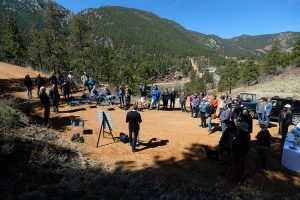 It was the opening act of the new James Turrell Skyspace project, which will debut this summer, and become an integral part of the Green  Box Arts Festival. The ceremony wasn’t  short on theatrics, and even was showcased with a live trumpeter, welcoming residents to the backside of the Red Butte Mountain site, close to where the installation will reside.

On Saturday, community residents, civic leaders, journalists, and even a few canines, walked, or were shuttled to the site, a short trek from the town’s community farm stand near the lake.

“It embodies positive light,” said  Mayor Jane Newberry, when describing the forthcoming James Turrell observatory-like installation and overall project.  “We have come out of a dark tunnel.”

“It will become a place to unwind, unplug and soothe your soul,” said  Jesse Stroope, the well-known local representative of the Historic Green Mountain  Falls Foundation and the Green Box Arts Festival group, when describing the installation.

Stroope, Newberry and other speakers touted the lengthy process undertaken to get the project underway, including two years of annexation hearings and detailed planning with considerable cooperation from the town of Green  Mountain Falls and the developers

“We had one chance to get this right,” said Newberry.

She lauded the effort of the property owners,  headed by Chris Keesee, in taking painstaking efforts to further beautify Green Mountain Falls and developing an attraction that residents and visitors will enjoy. Keesee started the annual Green Box Arts Festival and is the trustee of the Kirkpatrick Foundation that funds many community projects.

“We are an odd group of people,” quipped Keesee, who cited the work of a multitude of organizations, aimed at making Green Mountain Falls a better place.  He said this summer will mark the 12th anniversary of the Green Box Arts Festival, a two week showcase of art, theater, ballet, live music, workshops and more.

Keesee also was instrumental in coordinating the project with Turrell, who reportedly was  quite impressed by the community nature of the Green Box effort.

This will mark Turrell’s first Skyspace venture in Colorado. He has done about 85 skyspace installations throughout  the world.

Turrell is known for cultivating peaceful and powerful environmental works of art that focus on human perception. His interest in the physical presence of light and space derives in part from his Quaker heritage. Turrell’s autonomous skyspaces, with ceiling apertures open to the sky, may be understood as creative observatories – a combination of architecture, sculpture and atmosphere perfectly positioned in nature. The Green Mountain Falls Skyspace is one of more than 85 that the artist has designed and built across the globe.

At Saturday’s ceremony, Keesee said that the artist will actually name the project at a later date. 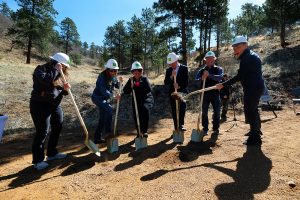 A formal dedication is scheduled for July 16, the target date for completing the work.  The new attraction, though, features much more than the Turrell installation. It will be rounded out with a series of nature trails, a look-out area, parking hub, restroom and possibly a future equestrian rescue spot.

It culminates a number of community meetings, with the vast majority of residents giving the project the thumbs-up.

Now, the real work begins, according to Stroope. He said he now must complete trail work, started by the late Dick Bratton, who passed away several months ago. Bratton was regarded as the guru of GMF’s emergence as  a leading trails and outdoor destination. “That trail is very important to me personally as it was the last one Dick was involved in with us,” said Stroope.

The overall Turrell Skyspace project will involve thousands of dollars of infrastructure work.