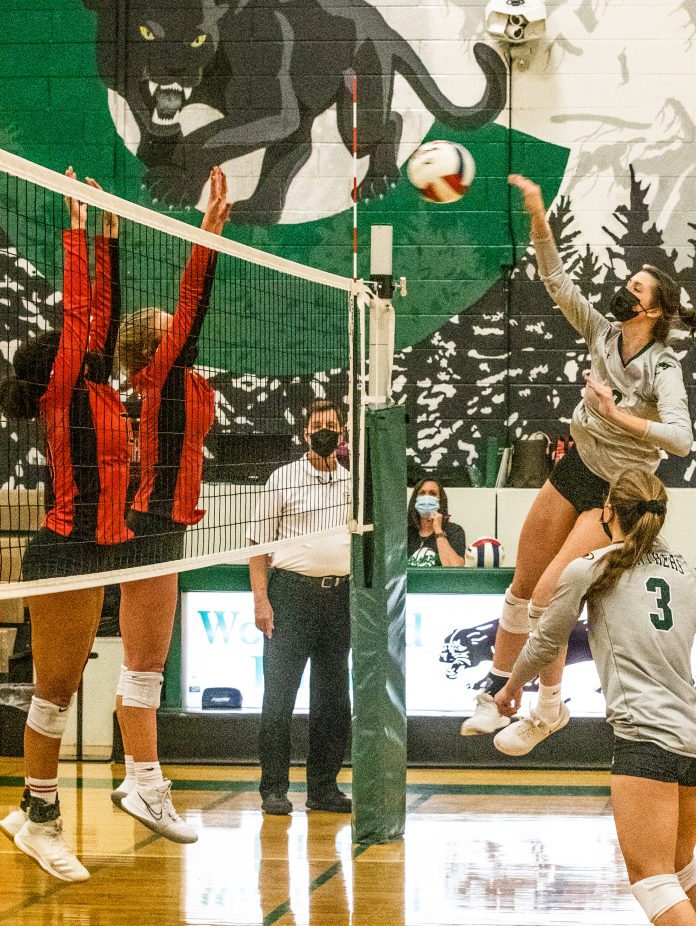 The Lady Panthers have continued to dominate the volleyball courts, following a tough loss against Coronado, and are eyeing promising playoff prospects.

Last week, the team was supposed to get a chance for revenge against the ruthless Cougars, but they were quarantined due to a COVID-19 scare. Due to the quarantine, the girls have not played or practiced since April 13.

During their last game played, the Panthers got back on a winning streak when they beat Harrison in three sets. 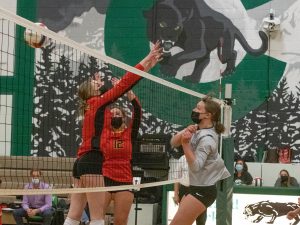 The ladies are currently in second place in their 4A Colorado Springs Metro league with an 8-1 league, record sitting behind their rival Coronado. Canon City sits in third with a 4-4 league record.

The team’s coach, Stacy Roshek, said that this year the top 24 teams will make regionals instead of 36. She said that the top eight teams will host the regional tournament and the winners will then qualify for the state championships held in Greeley. 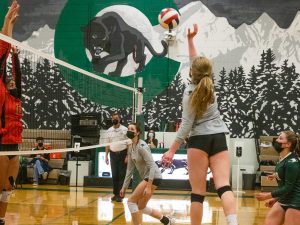 Overall, Roshek said she has liked what she has seen from her team this season. “I am happy with just how the team is playing overall as a team since we lost three good seniors last year,” Roshek said. “They are determined to win and they are all stepping up and playing their role.”

Roshek said that one player that has impressed her this year is their setter, Giana Roskam. Roskam has had to step up and play the position, since senior setter, Lauren Ingalsbe, has been quarantined.

“We changed the offense and we have had to rely on our sophomore setter to run the offense,” Roshek said. “It has been ‘cool ‘ to see her step up and do a good job with that.” 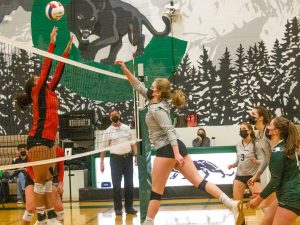 Roshek also said that junior outside hitter, Grace McClintock, has also stepped up her game this year. The coach said that she is getting good at serving and receiving and her hitting has also improved.

Roshek is also impressed with the team’s libero and her daughter, sophomore Sydney Roshek. Sydney Roshek has performed well defensively as she has been assuming certain roles that nobody thought she would be able to completely handle. But they were wrong.

The head volleyball skipper has cited a few areas of needed improvement, if the team plans to be successful in the post-season. “We have been working on controlling our forced errors so we are not giving away points to the other team,” Roshek said. “I think we could also be in more control when hitting. We also need to make sure we get the outsides involved and they are consistent with their hitting and attack.”

The Panthers 2021 soccer season came to an end without the team earning a spot in the post season.

However, the lack of a playoff berth wasn’t unexpected, as Woodland Park has fielded a young team, with 2021 regarded as a season for rebuilding.

In its final games, the team lost to Canon City by a 6-1 score. Then, the Panthers fell short against Harrison 3-0.

The boy kickers ended their season with a 3-7 overall record. However, with their 1-5 league record, the boys fell in sixth place in their 4A Colorado Springs Metro League. Coronado took first-place, Mesa Ridge came in second and Harrison snagged third.

As for team statistics, junior Alex Vonderharr led the team ,as he picked up 13 goals over the season. Freshman Ryder James was the team’s second best in scoring as he kicked the ball through the net four times.

Senior goalie Andrew Graber played eight of the season’s 10 games, and he picked up a total of 86 saves. Freshman goaltender Caden Bolin will be the team’s starter next year, and this season he played five games and picked up 23 saves.

The team will now be focused on their season for the next school year, which will occur sooner than most anticipate, taking place in fall of 2021. The coronavirus epidemic has altered the playing schedules for many sports