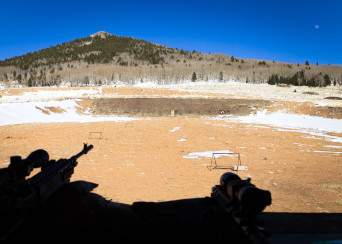 Now that the weather is slowly starting to warm up, many gun enthusiasts are getting ready to head outdoors to practice their shooting skills.

Shooting is allowed in certain areas of the National Forest when there is no fire ban in place, but finding a spot can sometimes be tricky.

Construction began on the Gold Camp Shooting Sports Center in 2013, and the complex now has three different shooting ranges. The complex sits on more than 100 acres and it is located at 2067 Highway 81 near Gillette Flats.

The sports center has one covered range where people can get out of the wind to shoot at targets. The covered range is 100-yards long and it is used to practice pistol and short-range rifle shooting.

The center also has a 25-yard range that is not covered, used for handgun and small caliber pistol shooting. The short range is used by the Cripple Creek Parks and Recreation Department for concealed carry certifications.

Adjacent to the covered range, sits a 400-yard range where firearm buffs can practice their long-range shooting skills. All of the ranges are surrounded by berms and the long range has metal targets at 200, 300 and 400 yards.

The shooting club currently boasts more than 200 members and those with a membership can access the range any day from dawn until dusk. Membership costs $150 per year and members are allowed to bring family members and guests.

From April to November, the club designates one Saturday per month as member-only days. During these dates, members can participate in shooting contests and enjoy barbecue lunches.

According to TCCS President Alex Paul, the shooting complex will soon hold public shooting days once the weather warms up.

“From around mid-April to November we try to schedule public shooting days on both Saturdays and Sundays,” Paul said. “On those days we will be open from 10 in the morning until three in the afternoon. Anyone who wants to can come out and shoot for $15 for the day. We do have restrictions on no incendiaries and some of the high-powered rifles and ammunition we won’t allow. For example, we don’t allow people to shoot 50 caliber ammunition.”

Since construction started on the range seven years ago, the club has been reinvesting money into the complex to make expansions and improvements. Currently, TCCS is working on building a shotgun range on the far south side of the property.

The new shotgun range is slated to have a trap range where people can shoot clay pigeons to practice pheasant and small bird hunting. Currently, the trap house is built and the club is waiting to complete the range sometime this year.

The shotgun range will also have a high tower and low tower skeet range. The skeet range will be combined with the trap range and people can shoot clay pigeons to practice duck and goose hunting.

Also in the near future, the club is planning on extending their long 400-yard range. The plan is to clear trees past the 400-yard metal target and put in a target at 500 yards.

Once the plan to expand the long range commences, several trees on the far end of the property will have to be removed. TCCS has a deal with the county that they must plant a tree for any tree they remove. Once the expansion project is completed the organization will have to plant about 800 trees to make up for what they removed.

Visit https://tcss-co.org/ and fill out an application on-line to join the club.