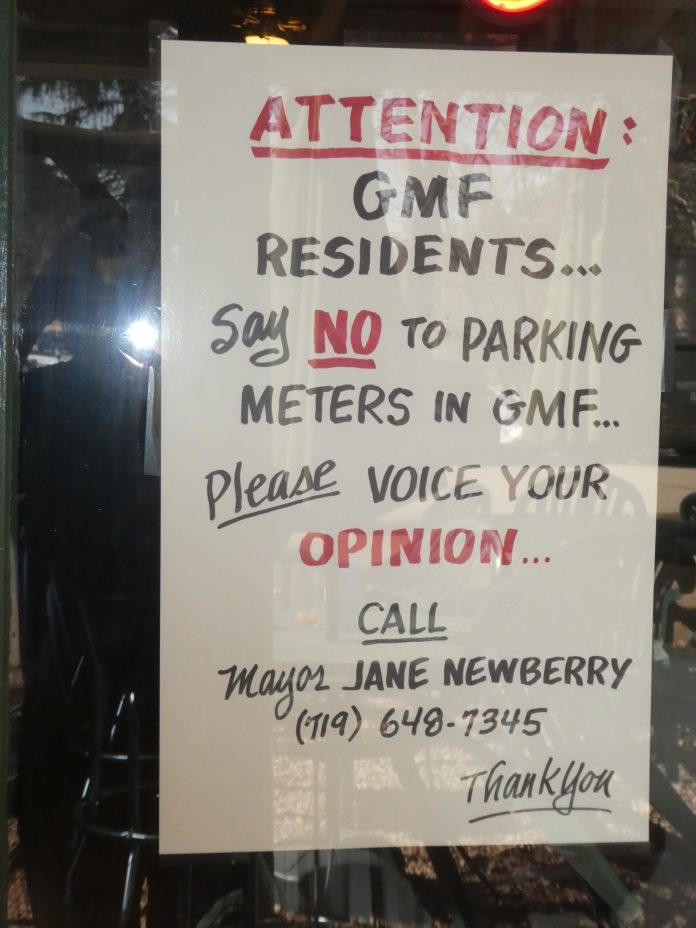 It’s onto Round Two in the Green Mountain Falls paid-parking fight.

Only now, one theme is resounding:  The town will have no designated meters, and leaders are redefining the program as “managed parking.”

Last week, the GMF Board of Trustees took a major step forward in a pilot program, calling for paid-parking on the weekends for many visitors and hikers for at least two years.  By a unanimous vote, the trustees approved the wording of a request for proposals notice and bidding  process, which could set the wheels in motion for a formal parking fee program by late spring. Local residents and visitors who only park for two hours, though, would not be affected.

Proposal bids are being now being accepted, and formal action could occur at the next board meeting in April. Bidding information is provided on the city’s website.

However, conceptual details are still somewhat sketchy as to what town residents can expect, as much of the onus for specifics is being placed on the potential parking contractors. Town leaders could pick a contractor at its meeting on April 6.

But last week, Jonathan Cain, the assistant city administrator for Idaho Springs, who is working as a consultant free-of-charge for GMF, outlined a few possible details.

“There are a lot of opportunities to make it a unique opportunity (for the town),” said Cain.

He, and town officials, including Marshal Virgil Hodges, made it clear that the future system would involve no meters. “Meters are not used anymore,” said Cain, in outlining the current technology of parking management contractors.

But as far as details, he said it really comes down to what a potential contractor devises, and what agreement is reached with town leaders. Some of the options include a kiosk system, similar to ones used in other Colorado communities, such as Manitou Springs,  or a fully computerized GPS-type format; coordination with  local businesses, such as restaurants, where fees could be paid there;   a parking ambassador program, in which employees, dressed in certain outfits, collect money from visitors and monitor the activity during the set hours. This latter option appeared to attract much interest at last week’s virtual meeting, but also generated questions.

Cain recommended a two-year pilot program at the minimum, as he estimated the initial infrastructure to set up a paid-parking system locally could cost a designated contractor between $250,000 and $300,000.

Under the current plan, the town plans to split the net proceeds with the contractor, with a management company footing the bill for establishing the system. Annual revenue for the paid-parking system is estimated at between $100,000 and $400,000, depending on whether it is seasonal or not.

The plan also calls for a trails’ information center for distributing maps and giving hikers information.  This could be set up around the pool area.

Cain indicated the parking effort, now being dubbed as more of a managed parking system, could allow for much flexibility and buy-in by local business operators, residents and even school kids. He emphasized that the main goal is to alleviate the crowded packed parking scenario on the weekends.

The paid-parking plans of GMF once again generated a lively discussion last week.

“We need to be really careful,” said Planning Commission member and resident Lamar Mathews. “There is no escape clause.  I have concerns about events.”

And while acknowledging that a future paid-parking system was recommended in the town’s most recent comprehensive plan, the resident noted that this theme is not emphasized as much as establishing a more robust commercial business core.

And reaction to date from local business operators has not been that positive  “We are a town of a few restaurants and dirt trails,” said Ben Stephens, the owner of The Pantry, in a call to TMJ.  “This is ridiculous.” 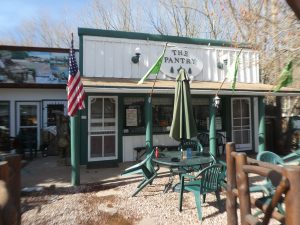 Already, The Pantry has placed a sign on its front door, outlining much opposition to the plan. Stephens  also believes the town is not respecting the legacy of the late Dick Bratton, a long-time leader, who played a big role in pioneering the trails movement in the Ute Pass area.  “They are trying to make money over what Dick did for this town (in establishing the trail system),” said Stephens.

Among the trustees, they support giving the plan a shot, but did express a few concerns about the details at last week’s session.

“We are committing to a system rather than a pilot program,” said Trustee Dyani Loo, in describing aspects of the contractor bid proposal that she objected to.  Planning Commission Chairman Todd Dixon cited several suggestions to tighten up the proposal to give the town an out if expenses exceed revenue.

Trustee Katharine Guthrie asked if the town’s proposed network of allotted parking spots, estimated at about 250, would be marked.

Mayor Jane Newberry, though, set a cautionary tone to the debate. “This isn’t set in cement,” said the mayor. “We don’t know, what we don’t know.  Nothing ventured, nothing gained.”

These comments referred to the fact that town leaders don’t have to approve anything, if the terms of a contract with a paid-parking management company don’t work for the town. The mayor stressed that this effort marks a way to combat a growing problem the town experienced last summer.

Due to the pandemic and the closure of  nearby trail hubs, such as Waldo Canyon, Green  Mountain Falls has experienced an explosion of outdoor buffs and hikers, according to town leaders.

Interest in the paid-parking program has been strong, according to Town Manager Angie Sprang.  She said the town has already been contacted by several companies expressing an interest in submitting a bid.

Hodges, though, expressed strong concerns in the volume of rumors circulating in the community about the program.  He blasted the media for images of parking infrastructure that might be used to orchestrate the system. (TMJ did put in a graphic of a parking kiosk machine in its Feb. 23 issue.  A parking kiosk system, similar to what is used in Manitou Springs, though, is one idea being thrown on the table.)

The marshal  urged a sense of unity about the current dilemma facing the town.  “I can’t be the enforcer,” said Hodges, who explained the problems he encountered last summer, with  many people parking illegally in residential areas, and every public parking spot taken downtown.  “There is a lot of misinformation.  These things are getting out-of-hand…Town citizens have a little bit of common sense.”

Hodges stressed that no parking meters will dot the landscape of Green Mountain Falls and no residents will be impacted. “It is managed parking. There is not a citizen or resident who has to pay for parking.”

However, some community leaders say they would like to see more specific plans, and a more defined business plan. This was a complaint made by Bratton, just prior to his unfortunate death, during the last time he addressed the board of trustees. “The paid-parking system concept lacks a business plan,” said Bratton. “It has to many demands of the contractor…Let’s go cautiously.”