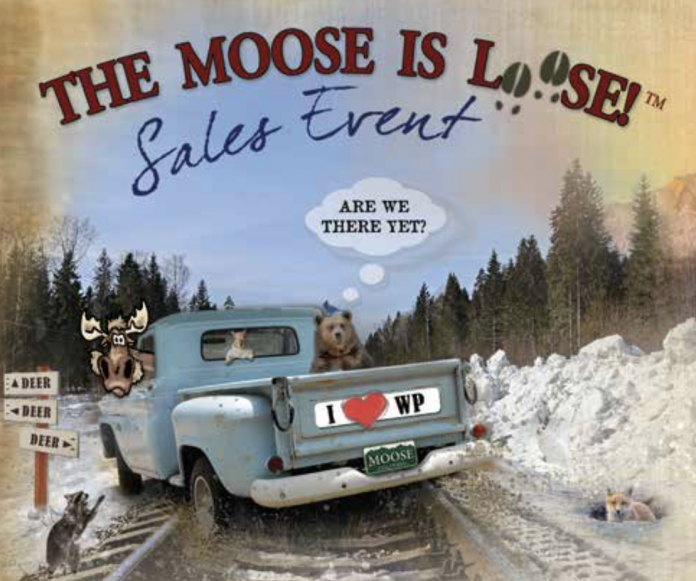 Woodland Park’s famous “Moose is Loose” city-wide celebration is nearing a conclusion, with great deals ending this Sunday and a hefty lineup of special events throughout the weekend.

As part of the annual tradition, the event kicked off with a grand opening  at Tweeds Fine Furnishings on Feb. 13.

The event hosts a slew of special sales at a number of local businesses including up to 75 percent  off for certain items at Tweeds, and half-off rooms at the Edgewood Inn. More than 20 local businesses participated in the event this year, including local favorite spots, such as the Cowhand, Brazenhead Vintage Market, Colorado Gearlab, Miss Priss Boutique, and the Rhapsody Bar.

During the two and a half week, retail celebration,  the acclaimed moose makes several surprise appearances and shoppers are encouraged to visit local merchants. As people shop, they are given a card to make a poker hand they can use to win a variety of prizes.

Those who visit five or more places on the list have the chance to win a $500 spending spree at any and all local Moose Is Loose participants. People who visit more than five local merchants earn a better chance to get a good poker hand to win prizes.

Shoppers who spend more than $75 at participating stores during the event will receive a voucher for a 40 percent discount for a mid-week lift ticket at Monarch Mountain.

When the event started, many predicted that the turnout would be low due to the cold weather conditions over Valentine’s Day weekend. However, the grand opening event turned out to be a success with the arrival of the famous moose, and a performance from the Mountain Eire Irish Dance group. The choir scheduled to sing had to cancel due to the frigid temperatures.

“With the weather during the first weekend we weren’t sure if we were going to get a few people or a lot of people,” event organizer Karole Campbell said. “And we really pleasantly surprised that we had people lining up before the doors were open. People started lining up at around 9 in the morning for the grand opening, so it was really cool. A lot of our merchants ran out of the moose passes and schwag that goes with it.”

Campbell also said that this year they have an online store, where people can purchase items from home. She said that after a few days their website was already getting several sales.

According to Tanner Coy, the president of Tweeds Fine Furnishings, the sale has been going really well this year. “I was incredibly pleased with opening weekend,” Coy said. “I was pleasantly surprised to see so many people turnout despite the cold. Saturday at kickoff we had about 150 lined up at the front door by the time we opened. And it was about 10 degrees out there and people showed up in droves. It was not record breaking but it was a really strong turnout.”

Other merchants around town also said that several people came into their stores during the event. And Coy said that sales for Tweeds have been so good that they ran out of inventory, forcing certain items to be available by special order only.

The event celebrates the community with several special events for the sale’s last weekend. On Saturday, the Teller County Regional Animal Shelter (TCRAS) will be set up at the Rhapsody Bar with animals from 11 a.m. to 1 p.m. People will also have the chance to meet the 2020 King of The Mountain racecar driver Clint Vahsholtz, and see his racecar between noon and 2 p.m. at Vahsholtz Automotive.

During Saturday and Sunday, the Brazenhead Vintage Market will be having a food truck rally, featuring local mobile eateries such as Thai Good Eats, Red Diamond Gastrotruck, Mountain Magnolia, and Prime Kitchen. On Sunday, there will be a downtown art walk, where people meeting at Memorial Park between 11 a.m. and 1 p.m. will have the chance to check out art from local artists.

The Broadmoor Pikes Peak Cog Railway has significant history in the Pikes Peak and Woodland Park region, reinforcing the region’s reputation as a tourism destination and providing an economic development base for Teller County.

“I was pleased to be able to provide the support for moving the cog car to its new home at Midland Station in Woodland Park,” says local real estate agent and donor Duane Carter, “The cog is an important part of our history and I believe it’s an asset to have in our community.”

“The cog car is such a fantastic visual focal point for the core of our downtown,” says Merry Jo Larsen, Chair of the Woodland Park Downtown Development Authority, “We thought it was a great way to connect the history of our region to today’s thriving business and residential community.”

Drinks and food will be available during the event. Also, Larsen, a community anchor for decades, will be returning to preside over the ceremony. Larsen has been out of commission for several months due to health problems.  There will be stairs on the car, so event attendees can enter the cog railway exhibit and walk through the car.