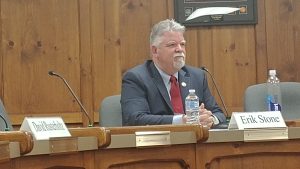 The new state legislative session may just be getting underway, but the gloves are already coming off.

While the commissioners have taken an active role in serving as the Teller County Board of Health, they may not be allowed to serve in this capacity much longer.

That according to  new possible state legislation that is triggering outrage among rural counties, including Teller. A new bill, which hasn’t formerly introduced but appears to be gaining ground, would not permit county commissioners to serve as the board of health, similar to what Teller County now does.

Newly-elected commissioner Erik Stone said  many elected leaders across the state are joining the Colorado Counties, Inc. lobbying organization in preparing to block this move.  “It doesn’t really solve the problems (associated with COVID-19)”, said Stone.

“This would have a huge impact on us.  It is important for the county commissioners to remain serving as the board of health. We are the ones paid by the taxpayers. We have to be there.”

Under this operative, he contended it could be hard for some rural counties to even reopen or function. Stone lauded the work of the previous board of health in working to keep local businesses and the casinos open, even if they encountered more restrictions.  Around Christmas time 2020, the county faced a potential lockdown period, as the state wanted to re-designate Teller as a Level Red zone, which would have shut down local casinos and prohibited indoor restaurant dining and imposed big restrictions on retail stores.

Stone has already taken a lead role in starting a new “Colorado Commissioners Freedom Coalition,” to address issues like this that have a big impact on rural areas.

“Local control is our main objective,” said Stone, who fears many unfunded mandates.  For example, he said some of the new rules facing the sheriff’s office are outrageously expensive to implement.

The Teller commissioner has made it clear that he and other leaders are less than happy with the stance taken by the governor in mandating restrictions. “We are approaching a year under authoritative rule,” said Stone. “This is unconstitutional.”

But unfortunately, Teller leaders face some tough political odds, especially in counties with  GOP elected leaders.  The state legislature is currently in control of the Democrats, with Governor Jared Polis and a state Democratic-controlled House and Senate. Few political insiders see this changing anytime soon, and are predicting more pro-green legislative efforts.

While the GOP made strides in many states during the Nov. election, those gains didn’t occur in Colorado.

However, Stone is optimistic that many commissioners in the state, with the help of CCI, can try to lobby for change.

Last week, a local CCI conference was held to discuss issues of concern.