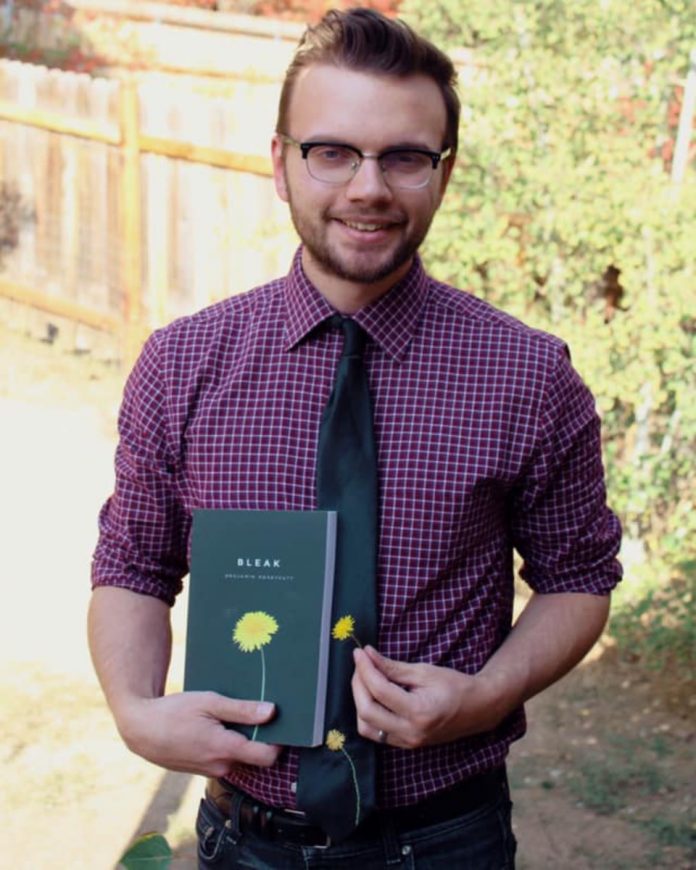 Woodland Park middle school teacher Benjamin Honeycutt has developed a growing reputation for his efforts to help kids deal with problems associated with bullying, and to get them more involved in key social and civic causes.

Moreover, many of his inspirational teachings are based on his own personal experiences.

Honeycutt started teaching five years ago and continued a family legacy since both of his parents were teachers.

According to Honeycutt, when he was young, he was the victim of “daily and unrelenting bullying and targeted abuse.” After transferring schools, he wanted to use his experiences to help others.

By the time he got to high school he started writing a novel called “Bleak” that was semi-autobiographical and was about a teenager who suffered from being bullied. After spending seven years writing the book, he finalized the novel in 2018.

The book will soon be published as an audio book and Honeycutt currently offers it to kids who can relate to the story. The teacher said that the book is aimed towards kids in eighth grade and older and that a couple of high school classes have read it as a part of the curriculum.

Also, while in high school, Honeycutt embarked on a fundraising project that turned into much more. “In high school I wasn’t a great student and I didn’t really like school,” the teacher said.

“But I was inspired by a teacher to start something called the legacy project that was required in order to graduate. I ended up getting connected with a principal in Nepal who wanted to bring a library to his school. So, we started a fundraiser and we were able to bring two laptops, internet access and furnish a library. When I got to college, I expanded that into a nonprofit and we have helped fund the construction of classrooms for two schools one in Nepal and one in Kenya. And we were able to supply clean water filters for those communities.”

Honeycutt is now the Chief Operations Officer for the nonprofit Open World Cause whose mission is “to open the world for students through technology, clean water, and access to education.” Honeycutt now uses his position to connect his students with real world projects.

“At Woodland Park, I had a group of students address mental health issues in the school and related issues that they and their classmates were facing,” Honeycutt said. “ They started a campaign with the Woodland Park Kiwanis and Rotary clubs to repaint the bathrooms with positive messages. It was done entirely by students and I did not pick up a paintbrush the whole time. But they repainted two of the bathrooms, one was an 8th-grade girls’ bathroom that was repainted with positive messaging. The other was a grade boys’ bathroom that basically had random poop jokes but the 7th- grade boys loved it.”

The students also teamed up with the city of Woodland Park to repaint the tunnels by Safeway but the project was halted due to COVID-19.

“Honestly a big reason why I ended up at Woodland Park Middle School was because one of the things I talked about in the interview was that I wanted to open up my classroom at lunch to create a safe place for students to go if they wanted to go,” the teacher said. “I was really impressed with how there was an enthusiastic reception to that. And there was value put into that by the administrators that were interviewing me. I really appreciated it and it really held true.”

Honeycutt said that through recent efforts across the country, bullying in some ways has reduced but that bullying in general has changed with the digital world. “The statistics show that bullying has actually dropped,” Honeycutt said. “Last time I looked at the statistics from Pacer ten years ago 29% of students reported they had faced bullying in school the previous year and in 2019 that number had dropped to 20. But on the inverse ten years ago 18% of students had experienced cyber bullying and now that number is up to 37%.”

Honeycutt said that with his new book he hopes to start conversations about bullying. He also wants to use his book to start talking about ways to prevent bullying in the future.

Honeycutt also has put forth several initiatives to stop cyber bullying. The teacher said one key to improving the students’ behavior online is to better educate them about social media and digital platforms. Honeycutt uses the term “digital tattoo” to describe the fact that once something is posted online that it may never go away and stay there forever. He said that he tries to encourage students to use social media and their digital tattoo to do positive things.

“Those digital tattoos can come back to haunt you,” Honeycutt explained. “But it is every bit true in the inverse too. If the students are creating things and starting different campaigns and they have evidence of that online, that can be every bit as beneficial and helpful for them in the future.”