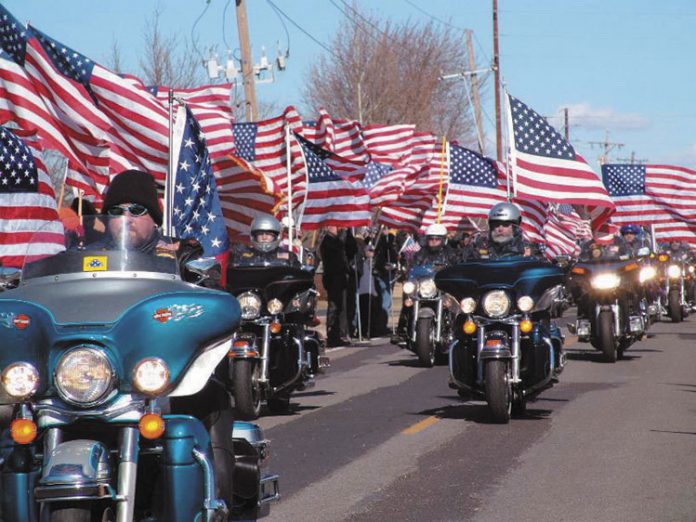 The Cripple Creek special event axe is chopping away at popular festivals and gatherings, with little mercy.

This is more bad news for a district known for events that pay tribute  to its mining legacy, colorful past and strong military roots.

The Salute to American Veterans Rally and motorcycle ride, a popular fixture in town since the early 1990s,is the latest event to face a temporary or possible permanent death. The rally was the most popular festival in Cripple Creek, based on crowd attendance, and provided a celebrated motorcycle procession and put the town on the map among veteran groups. Major national military leaders spoke at the rally and a special ceremony honoring those in the Pikes Peak region who died in conflicts overseas occurred annually. The rally also sported a popular veteran’s parade, memorial wall and several related tributes.

But the rally wasn’t without its critics, as some questioned the community benefits and even the benefits for actual veterans. A few critics maintained it was nothing other than an elaborate “biker party,” under the disguise of a veteran/military title.  Some local businesses also contended that it really hurt commerce, with the street closures.

Last week, in a stern Facebook announcement, Jim Wear, the founder of the rally and president of ProPromotions, conceded that the rally is dead, at least as far as occurring in Cripple Creek.

However, Wear and the rally supporters aren’t departing quietly.  The event founder heavily criticized the Cripple Creek City Council and segments of the American Legion Riders organization. A group, which called itself the Gold Camp Coalition, comprised of members of a variety of nonprofits organizations, including the American Legion Riders, were extremely critical of the Salute Rally and the city’s financial commitment towards that festival.

“While it is clear to everyone on our end that the vast majority of citizens and businesses in the Cripple Creek / Victor /Teller County area love, support and covet the rally and respect our efforts and hard work toward honoring our veterans, we are simply no longer willing to work in such a hostile and toxic environment. Honor, respect and integrity have seemingly given way to greed, dishonesty and a want for power and control,” said Wear, in a special announcement. (His full announcement is posted in our letter to the editor section).

He contended the town will face the same fate as it did in 2007, when event organizers took their rally to Winter Park following opposition from city leaders. As noted by Wear, “History it seems has been forgotten and the consequences of the rally’s departure from Cripple Creek in 2007 will likely repeat. For that, we are beyond regretful, stated Wear. “The Salute to American Veterans Rally put Cripple Creek on the worldwide map as sacred ground for our beloved United States veterans and as the west’s most patriotic town. It is beyond sad that a handful of people, working against what the majority supports, have managed to destroy that legacy of great work.”

However, the Winter Park stint for the rally only lasted several years, with city leaders there pulling the funding strings due a lack of lodging revenue from the festival.  Wear then agreed to move the event back to Cripple Creek, following negotiations between himself and former Cripple Creek Mayor Dan Baader.

Most leaders lauded the return of the event.

A Case of Bad Blood

But bad blood got stirred up again last summer between rally organizers and elected leaders.

The event was cancelled in an 11th hour move by the Cripple Creek City Council last summer due to fears of a renewed resurgence of the coronavirus epidemic. This decision was staunchly opposed by certain veteran organizations, which cited the isolation for their members created by the pandemic.

In fact, the timing of the council’s action also really irked Wear and the event organizers. In an earlier meeting, the council gave Wear the go-ahead for the rally, contingent on the event occurring. Some different interpretations developed over this decision.

Based on TMJ’s account, this contingency was mainly due to concerns that the rally would not get the go-ahead from Teller County, based on their coronavirus protocol. But ProPromotions did scale this hurdle and got health officials to sign off on the rally plans, as long as they assembled the crowds in certain ways to meet the 250-person limit (the rules at the time) for outdoor gatherings.

However, the council got nervous over the coronavirus situation and didn’t want to take a chance on any uptick of COVID-19 cases, which they believed could lead to the casinos getting shut down again.

A tough time for popular festivals

The decision by Wear means that three key events have been canned in the last few weeks. The list includes the Ice Fest, Fall Fest and now the Salute to American  Veterans Rally.

A key factor for these cancellations hinges on money. The city council decided to not sponsor or fund any special events for 2021, except for their July 4th celebration.  The only funds available are for assistance in offering some support services.  This marks the slicing of a pot of several hundred thousand dollars.

At the same time, city leaders say they are not saying no to special events. The town government just can’t fund them or play a role as event sponsors, in 2021.  The city plans to reconsider this action in the following year.

But the city is trying to get more organizations to take a more lead role in orchestrating their own special events, with the city becoming more of a host partner.

Locals Voice their Opinion on the Canceling of the Rally

I am a Vietnam Veteran, who participates in the rally each year. I am disappointed along with many other vets who also participate. I cannot believe that a few “Thugs” from the American Legion got to the City Council  convinced them the rally was no good.

I feel for Jim and Pam Wear, as I know they have been committed to the rally, as well as most of the town’s businesses and the KOA. I have always looked forward to attending and it is a shame.

Apparently the city council does not respect veterans for some reason. A highway is named in memorial of veterans who gave the ultimate sacrifice and to be disrespected by a group of inconsiderate politicians is a disgrace. I will sign every petition that comes around to keep the rally going. Hope everyone else will too.

Your conservative bias is showing.

Please address why the Republican’s allowed the Proud Boys to join there rallies.

Why did many US Veterans participate in an insurgency? I saw this coming.

The Cripple Creek Veterans  motorcycle rally (Salute to American Veterans Rally) participants, showed me their true colors last summer. They called the ride The Rebel Rally and stamped out anyone voicing concern over the pandemic.

The veterans  on the  Cripple Creek city council did not deserve the disrespectful treatment they received.  Mayor (Milford) Ashworth is not liberal. He and several other council members, got a good taste of the way one is treated if they disagree with a Trump supporter.