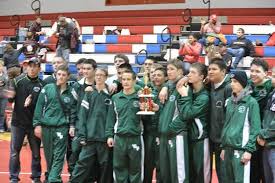 So far it looks like 2021 could bring about more normal sports schedules as leagues come up with ways to still play games without audiences.

However, currently high school sports have been postponed and the schedules were changed drastically. Plus, the main group sanctioning their activities continues to adjust the rules.

For high school sports, this spring the two teams to watch are girls’ volleyball and boys’ wrestling. High school volleyball coach Stacey Roshek has built a good program that has been successful in the last few years. Expect them to at least make regionals in 2021 and maybe even earn a right to play in the state tournament.

Last year, the wrestling team took a number of wrestlers to the state tournament and Junior star grappler Brady Hankin has taken the state championship the last two years in a row. Hankin will be even more competitive this year, and could take the state title once again. Hankin has Olympic aspirations.

This year, the team has lost a handful of their star wrestler to graduation, but there are some promising under classmen that could come out and shine this year. The team’s coach, Keith Sieracki, is confident of the new generation of young wrestlers and believes that his team will continue to be successful in 2020 and beyond.

As far as Panther football goes ,it is hard to make predictions. In 2020, the team was expected to do better than they did, but they were dealt some bad luck with the coronavirus-prompted schedule changes. Although they got the chance to play in the fall, they had to contend with several big powerhouses, teams they had no chance of really beating.

If the football schedule this fall is more normal, than the Panthers have a chance to do well again. However, the team will lose a number of star players that have been playing football together since elementary school to graduation. But Coach Joe Roskam has put a lot of time investing into the younger players and he is confident that the Panthers will continue to be competitive.

In professional sports, the Colorado Avalanche could have another chance at the Stanley Cup. The team has been pretty solid recently and they have made the playoffs the last two years. If their schedule stays semi-normal and they keep improving they could take the national championship in 2021.

The Denver Nuggets have also been stellar and made the playoffs the last two years. If they can learn from their mistakes then they could have a chance at playing in the NBA Finals. However, LeBron James and the Lakers will remain to be a hurdle that the Nugs will have to figure out how to overcome if they want a chance at the title.

However, the fate of the Colorado Rockies and Denver Broncos is still up in the air. Last year, the Rockies looked like a good team, starting out in stellar fashion. But they crumbled as the short season reached a peak, and recorded a losing record. The Rockies still struggle in multiple facets of the game, and for a change, couldn’t really hit well last year. Unfortunately, now they are in a very competitive division, led by the World Champion LA Dodgers.

The Denver Broncos have also been riding the struggle bus for the last few years as they haven’t seen a playoff game or beaten the Kansas City Chiefs since Peyton Manning was their quarterback in 2014. The team looks kind of promising at times and has many young players that have potential. But a Bowlen family dispute has currently left the team without an owner and the team may have to be sold.

Therefore, it is uncertain whether the Broncos will be able to turn things around in 2021 or not. Hopefully, the team will not see as many challenges in the form of injuries and disqualifications as they did in 2020.

Locally, the Pikes Peak International Hill Climb is on schedule to take place at their normal run date at the end of June. And hopefully, spectators will once again be allowed to watch the race.

If the race operates as usual, expect more competition from international drivers racing their super cars. Last year, local racing legend Clint Vahsholtz earned the “King of the Mountain” title by getting the fastest time up the mountain.

But, the 2020 race was the first one in a long time where there were no international competitors. If the worldwide racing enthusiasts return this year, expect more records to be broken.