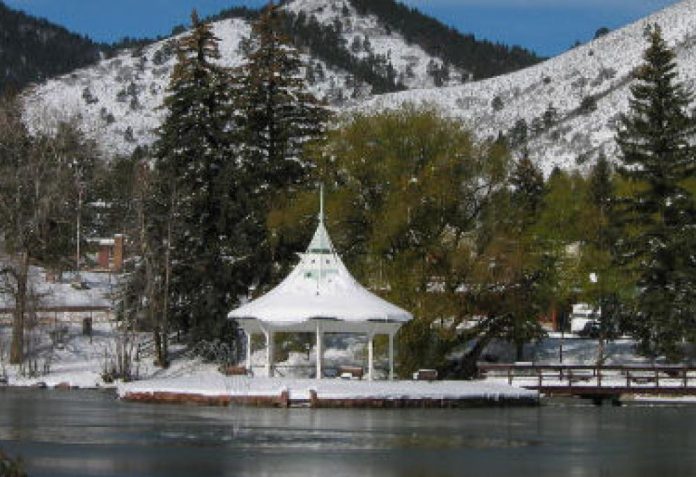 Plans for a major attraction and trail development in Green Mountain Falls, highlighted by an observatory-like, artistic installation, have taken another small step forward.

This sets the stage for a public hearing on Jan. 5 before the GMF Falls Board of Trustees.

This marks another key regulatory leap for a bid by Historic Green Mountain Falls Foundation, and the Green Box Arts group, to advance with a multimillion-dollar attraction, capped by a James Turrell Skyspace art installation. The proposed 1,000-square-foot installation would represent the only one of its kind in Colorado. There are 85 of these observatory-like facilities in the world, enabling visitors a rare chance to view the skyline and the stars in an unobtrusive manner and enjoy special lighting effects.

“It is very meditative and relaxing,” said Jesse Stroope, a leading representative for Historic Green Mountain Falls Foundation and the Green Box Arts group, in describing the artistic sculpture and related facility. The installation is often described as establishing a “naked-eye chamber to the sky.”

Artist James Turrell is known for  many of his works, and has received considerable notoriety for transforming a crater in Arizona into a unique Skyspace masterpiece. Many of his works focus on light installations that mesh technology with nature.

To date, the concept plans  presented by Stroope, have received a mostly positive reaction by community leaders. Besides the art addition, the plans call for nature trails, a restroom, a viewing area, a horse grazing section and more.

“I feel it is a nice asset for the town in so many ways,” said Planning Commissioner Lamar Mathews.  Other commission members agreed, and didn’t see any obstacles in preventing them from approving the annexation petitions.

Benefits to the Town

But still, the policy debate regarding the specific benefits to the community haven’t been quite aired.

Long-time resident and former trustee Mac Pitrone, once again, raised a red flag over the potential impacts and value of the annexation bid for GMF.

At the outset of last week’s hearing, Pitrone, a frequent critic of major developments in GMF, expressed concerns about the maintenance  of the forthcoming attraction. “The town should not be involved in any of these functions,” said Pitrone. He also questioned the recommendation for a favorable planning commission approval by the staff, saying the town needs to move slowly on this tourist/art attraction.

But his main question mark deals with the value of the annexation for the town. He contends there should be a true “quid, pro-pro,” and a give and take between both entities, so it is a winning deal for the town and the project proponents.

“That is not what it looks like,” added the resident. Pitrone previously unveiled a list of questions pertaining to this project he wants addressed, mostly dealing with potential impacts for GMF and local residents.

Later in the hearing, he directly asked Stroope why their group even wants to annex the area into GMF.

Stroope replied to Pitrone that the mission of Green Box and the Historic GMF Foundation dealt with doing “positive things for the town of Green Mountain Falls. We want to be part of the community.”

Stroope was prepared to address Pitrone’s litany of concerns.

But the planners believed that these are more policy-driven issues that should be handled at the Jan. 5 public meeting.

In past comments before the trustees and the Pikes Peak Chamber of Commerce Board, Stroope has cited the project as a way to benefit the local economy and businesses and turn GMF into more of a year-round town.  “People travel all over the world and country to view these installations,” said Stroope, at an earlier trustees hearing. “This is something the chamber (of commerce) can really sink their teen into.”

Stroope noted that this would become Green Box’s first year-round venture in Green Mountain Falls. In past years, Green Box is known for mainly doing a several-week festival that showcases major nationally-known art works and conducts many workshops.

Last week’s hearing, though, just dealt with the technical aspects of the annexation petitions. The planners agreed with previous comments made earlier by Mayor Jane Newberry, and favored an additional restroom facility at the former Joyland Church facility.

Stroope said their group had no problem with this idea, but just wanted more flexibility regarding where this would be located. He favored a requirement for adding a restroom facility at this section of the project, representing what is referred to as the Pittman trail.

A few other small technical details with the map were raised.

Stroope also revealed last week that they need to revise their plans for a water line. A previous project plan was rejected by Colorado Springs Utilities.

Stroope stressed that all phases of the project would be manned by the Green Box group. “We are envisioning managing this trailhead to trailhead,” said the Historic GMF Foundation representative.

The project’s fate now rests in the hands of the GMF Trustees. If everything proceeds on schedule, the project could debut this summer, with the artistic installation.

In other GMF news, the mayor, via an email letter,  has announced a community virtual forum on the evening of Dec. 15 and  kick-off for a resident survey.  This is aimed at getting input on such subjects as  parking, signage and trail use.  An earlier task force was formed in September to evaluate these issues. “It is not a ballot,” said Katharine Guthrie, president of the Pike Peak Chamber of Commerce, in discussing the survey. “It is information gathering.”