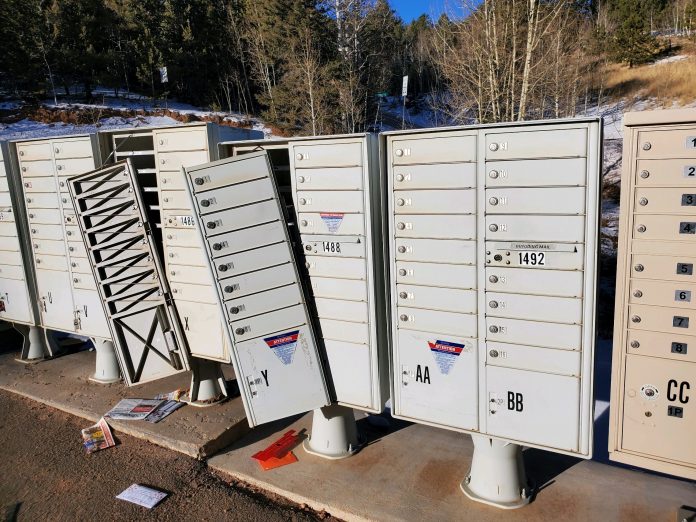 Residents were shocked one Friday afternoon recently, when excessive police activity prompted a brief closure of Hwy. 24, eastbound in the middle of Woodland Park.

In the end, local authorities put four people behind bars on many charges, related to breaking into mailboxes.  The success of the case resulted from fast police work, following a key tip from a local citizen.

At around 5 p.m. on Dec. 4, a Teller County Sheriff’s dispatcher received a 911 call from an eyewitness, saying that they had seen a group of people breaking into mailboxes. The witness had driven up on the suspects, while they were in the act of prying open a set of large metal mailboxes with a pry bar.

As the witness drove up on the suspects, they stopped what they were doing and then fled away in their car. The witness then followed the car and was able to get a description of the vehicle and the people inside the vehicle.

A short while later, a Teller deputy realized that he was driving behind the suspects’ car, and attempted to make a traffic stop. But then, according to Teller County Sheriff Commander Greg Couch, the car did not pull over and stop right away. Couch said that the vehicle did not actually flee and try to run, but they did not pull over for three or four blocks through the city.

Couch said that there was thick traffic and when all of the cars on the road started moving again, the white BMW containing the suspects looked like it wasn’t going to stop or pullover. Other deputies and police vehicles then boxed in the car in the middle of the highway near the Baldwin Ave. intersection. This also prompted a brief closure of a section of Hwy. 24.

After police arrested the four individuals, Jeremiah Thompson, Justin Martinez, Patricia Martz, and Kayla Thompson, the highway was then reopened. The four suspects were arrested on charges including criminal mischief and burglary, and more charges could still be filed.

The eyewitness that saw the crime was also able to correctly identify the vehicles and suspects that he saw, after they were in police custody. During the initial investigations, authorities also learned that a total of two mailboxes were broken into.

And after a search warrant was conducted on the car, police found evidence that ties them to the reports of mail theft.

“That’s the name of the game, if we get information, we act upon it immediately and as safe as possible to hold people accountable for what they have done,” Couch said. “The Teller County Sheriff’s Office will never stop holding criminals who prey on our communities during the holiday season accountable in the most proactive and aggressive way. We would like to say a big thank you to the witness who called and gave a description of the suspect(s) and the suspect vehicle.”

Couch said that after the event happened, one resident has reached out saying that they may have had some mail stolen from them. A further search of the car also revealed that there was a handgun inside the vehicle.