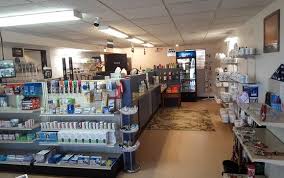 We can’t help residents and senior citizens with the starting of a new pharmacy in Florissant, but plenty of resources are available to help displaced customers of the former Mountain Key outlet, and we will do what we can to close remaining gaps in service.

The Mountain Key, located on Teller One, has served as the area’s sole pharmacy for several years.

In addition, we want to come to the possible legal rescue of many residents worried about a key water source in Gillette getting shut down by the state, and develop a permanent solution.

These were the themes of a community forum, held by state Representative Mark Baisley at the Dawn of Hope Ranch in Florissant last week, and featured on Zoom. 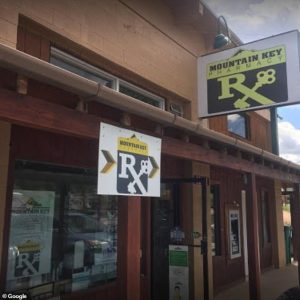 The scheduled topic of the meeting dealt with the community’s dire needs with the closure of the Mountain Key pharmacy due to the legal and criminal woes facing operator Brent Stein.  Stein has been charged with several cases of sexual assault.  This turn of events has reportedly shut the pharmacy down, with questions circulating about the current need and pharmacy supplies of their customers

At the outset of last week’s forum, Baisley said he couldn’t resolve the situation legally, and he didn’t have the entrepreneurial expertise needed to orchestrate the starting of another pharmacy in the area. But he said his office will do what it  can to reach out to pharmacies in the area to assist the community and the Mountain Key customer base.  The pharmacy was mentioned as a big community resource, with a customer base of 100-plus people.

“We are trying to fix a problem that needs help,” said Baisley. “It is unfortunate we do not have a local pharmacy (anymore).”

Customers of  Mountain Key were informed that their medications are being transferred to an outlet in Buena Vista. But for some, this would pose a big inconvenience.

Fret not, cautioned Baisley and representatives of his office, as plenty of options are available.

During the meeting, Baisley staff assistant Antoniette Harris cited much cooperation from nearby pharmacies. “They all responded wonderfully,” said Harris. If customers want to transfer their needs over to another outlet, or pursue a shipping option, instead of traveling to Buena Vista, these services could be accomplished, according to the Baisley representative.

Baisley even mentioned a spree of other possible options, such as curbside service. “There are relationships with these pharmacies,” said Baisley.

The scant crowd that attended the forum appeared satisfied with the options available, especially with the many outlets available in Woodland Park. No one complained about problems they have encountered in getting medication.

The Mountain Key outlet began in the winter of 2018. But at last week’s meeting, some concerns were mentioned about customers not getting the full supply of their medications. Despite the legal woes facing the Mountain Key operator, the actual pharmacy received much favorable coverage in the local and regional media due to the business filling a big community need.

That scenario, though, started to change when serious allegations were made against the Florissant pharmacist for sexual assault charges by a number of reported victims.

The actions taken against the pharmacy owner were part of a massive investigation launched by the Teller County Sheriff detective, who recently received the annual Brent Holloway award (see related story). 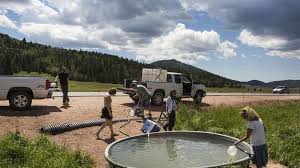 But the subject that appeared to raise the ire of area residents and forum attendees the most last week dealt with the unsure fate facing the Gillette Flats Spring organization.

Group representative Kirt Huffman gave a presentation and outlined some of the key deadlines facing their organization and hundreds of water users. The group is trying to get the okay from state authorities to permanently use the historic spring, located off Hwy. 67, in the Gillette area. The spring, besides serving as a key water resource for hundreds of residents, actually is a big tourist attraction.

Moreover, Huffman praised the efforts of Brian Cooper, a pastor at the Faith Fellowship Church in Cripple Creek, for stepping up to the plate and supporting the group’s effort as a nonprofit entity. That is one partnership the group needed to obtain to continue their legal fight. The battle lines were actually drawn in late 2018, when the state threatened to shut the historic well down due to drought-related concerns and issues over water rights.

A group of concerned residents and spring users then launched a petition drive that collected an estimated 2,000 signatures and temporarily halted the state’s closure action.

But Huffman at last week’s forum questioned the lack of support from the city of Cripple Creek.  He gave an earlier presentation to the city council there in August and received a lukewarm response by elected leaders. Creek leaders mostly supported the group’s mission, but maintained they do not have legal jurisdiction over this issue.

Huffman said they now really need Cripple Creek’s help, and urged residents to contact city leaders and officials. At issue now is a water replacement plan.  In essence, they need either to purchase or obtain a certain amount of donated H2O from another entity. The Gillette group is hoping to get this water replacement supply from Cripple Creek. This replacement plan must be finalized by the end of November, and the group has exhausted all deadlines.

One member of the water group contended at last week’s forum that Cripple Creek is putting up road blocks. But few details were provided regarding this assertion.

At a previous council meeting in August, most Cripple Creek leaders just worried about fact that the Gillette Flats area is out of their jurisdiction. The council expressed an interest in possibly sending a letter of support for the group’s cause,  but indicated they would have to get the city’s water attorneys to review the specifics of any detailed request.

Huffman continued to stress the historic importance of saving the water spring resource. “It is a great opportunity. This is a huge step towards protecting the past,” said Huffman, who cited the fact that the Gillette Flats resource stemmed back to 1894.

He said the group has the chance to come up with a long-term solution, if it can mount a few remaining hurdles.

The Gillette Springs group has secured the support of Baisley and his staff, who previously appeared at a Cripple Creek council meeting.  For  more information, contact Representative Mark Baisley at 303-866-2935.