With a spree of recent media stories, the Teller County Jail has commanded main stage attention due to the sheriff department’s strong partnership with the federal Immigration and Customs Enforcement (ICE) agency, coupled with a related protest and even a reported prisoner hunger strike.

In fact, the 100-plus bed facility can’t seem to stay out of the news these days.

Back in mid-July at least one group of people came to the area to protest for the release of eight inmates that were being held at the jail under holds issued by ICE through the 287g partnership agreement. And then, last month a group made a claim that a group of alleged illegal immigrant detainees within the jail were going on a hunger strike,  but the claims were refuted by ICE officials.

All in all, attention has created a booming business and higher profile for the jail in Divide.

Last week, the jail got put under the public spotlight again when Teller County Sheriff Jason Mikesell announced that the facility now has a new boss, after former jail commander Stan Bishop was promoted to the undersheriff position. After opening up the position to employees that already worked for the sheriff’s office and testing several candidates, the department decided to promote Lad Sullivan to the detentions center commander position.

Sullivan first started with the sheriff’s office in June of last year as a jail corporal after retiring from working as a law enforcement agent for the Colorado State Patrol and the state’s gaming enforcement division. “It’s a unique challenge for me having been in law enforcement for 30 years I had never worked in a jail,” Sullivan said. “When I came in, I actually told the guys that I don’t know anything about running a jail but I know law enforcement. So, I have learned as much from them as they have learned from me so far.”

As the jail commander, Sullivan will now oversee all of the jail operations. His duties will include helping hire new staff, writing the schedule for the detention center, and doing all of the purchasing required. He will be in charge of 28 to 30 employees including several that are not certified law enforcement agents.

Although Sullivan has only worked for the sheriff’s office for a little more than a year, he is not new to the area or new to being a leader in law enforcement. After working as a state patrol officer Sullivan was transferred to Cripple Creek as a gaming enforcement investigator in 1998.

Despite being a supervising law enforcement agent in the past, the new jail commander said that his recently acquired position will be a little different. “Some of it will be the same but a lot of it is a new challenge,” Sullivan said. “Before everybody I worked with were 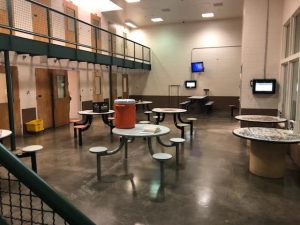 POST-certified police officers and most of the jail staff are not. So, there is a big learning curve for them to learn what their responsibilities are. It takes some time for them to actually understand the authority and the responsibility that you are carrying for these 60 guys that are incarcerated.”

According to Undersheriff Stan Bishop, the job was opened up first to applicants in-house before taking applicants from outside the agency. Bishop said that anyone interested in the position had to write a letter of intent and then submit their resumes for the position.

The applicants then were tested by a board that consists of law enforcement officers and a human resources agent. The test consisted of both written and oral exams and then the best applicant was chosen based on their testing and an oral board exam.

The Wild History of the Teller County Jail

Sullivan will man a Teller County jail facility that has sported a rich, historic folklore.

The original Teller County Jail was located in downtown Cripple Creek and served as the detention center in the county from the late 1800s to the early 1990s. The original jail was made from the interior of a ship and police officers used to shackle the inmates and walk them down the street to attend their hearings at the courthouse.

But with the advent of gaming, federal officials declared this facility as not in compliance with modern standards; and for a several year period, prisoners were transported to the jail in El Paso County and other facilities. However, this predicament escalated costs.

In the mid-1990s, the county built and started the jail that still stands in Divide, and officially retired the old jail, which now serves as a museum. When the jail first opened, it was under the control of the sheriff’s office, but a private contractor ran the detention center’s day-to-day operations.

During the first few years the jail was ran by the private company, the jail was having several issues. Then in 1998, an inmate, charged with murder, escaped from the jail by merely walking out a door. This prompted the sheriff at the time to fire the Massachusetts- private contractor and take over control of the detention facility. This contractor track record also was marred by several inmate suicides, including a dramatic hanging.

Ever since the sheriff’s office took control of the jail, there has not been anyone that has escaped from the facility. The Teller jail’s folklore, though, hit the national spotlight again during the capture and brief incarceration of the Texas Seven fugitives, who were captured in Woodland Park and Colorado Springs.

Concerns were raised if local law enforcement could handle their imprisonment in Divide without incident. But department authorities, under the reign of then Sheriff Frank Fehn, handled this task quite well.  The facility was even featured on the Sixty Minutes television show and the region was invaded by droves of media personnel from across the country.

Running the Jail as a Business

The sheriff department actually  took control of the jail in the late 1990s, and Undersheriff Stan Bishop was promoted to the jail administrator job. Since then, Bishop had been the jail commander off and on for over 20 years before being promoted to undersheriff for the second time in his career earlier this year.

Ever since the county took control of the jail, the detention center has operated as a free enterprise under the county. This means that the jail makes its own revenue and operates 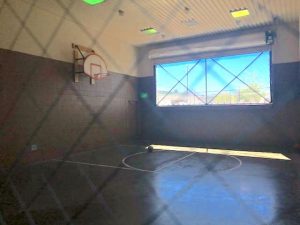 without using any taxpayer  dollars. The fact that the jail funds itself is unique because, according to Bishop, there is only one other jail in the state that operates as a free enterprise like Teller’s jail does.

Each year, the sheriff’s department takes steps to generate revenue for the facility, in an attempt to break even and pay for all of the expenses created by the detentions center. “It is run as an enterprise so you try to run it as a business so that it brings in income, but you are looking to break even,” Bishop said. “It’s not making great amounts of money. Some years it has lost and other years it has made money. Most years it makes just enough to sustain itself. It is holding its own I would say. Last year it made over a million dollars.”

The jail generates revenue mainly through holding inmates from other organizations including multiple federal law enforcement agencies. “We have contracts with the U.S. Marshalls, Department of Corrections, all of the Air Force bases here in Colorado Springs, the INS, and other private transport companies,” Bishop explained. “Since it is operated by an enterprise fund, we are looking at bringing in income to offset the budget.”

According to Bishop, the majority of the inmates the jail usually houses come from Teller County. Currently, the jail is at around halfway full with about 60 inmates with eight of them being held for ICE, and a few others that are being held for other agencies.

However, Bishop did say that the recent pandemic may have slightly changed those numbers since more local inmates have been getting released. “Eighty percent of the jail population has been Teller County inmates,” the undersheriff said. “Then when COVID hit that is when we started releasing everyone when everybody started getting PR bonds from the courts. And we haven’t been taking in too many people. Some warrants and stuff are starting to come back and crimes against a person, domestic violence charges, and felonies by law we are taking those perpetrators into jail. Those we have to do right now but other than that we are keeping the jail population as minimal as we can.”

Bishop also said that since the pandemic struck, the jail has not experienced a single case of COVID-19 inside the facility. Bishop said that anyone who comes into the jail from the street and did not get transferred from another facility has to quarantine for two weeks. The jail has a special pod setup for inmates that are being quarantined. The undersheriff also said that the jail is very clean and that it gets cleaned entirely about four to five times a day and then again at night.

According to the jail’s website, the facility is considered medium security because it has similar standards to a maximum- security prison but without the guard towers. The solid concrete jail gives inmates limited access to fresh air and the facility contains heavy guard to inmate ratios.

All inmate movements are heavily restricted inside the facility as inmates spend most of their time in one of the jail’s five “pods” or in two-man cells. The facility does contain a library area that serves as a chapel and barbershop as well as a recreation area where inmates can exercise and get some fresh air.

The facility normally operates with about six to seven guards per shift, making up a total of 30 employees. Currently, the jail is short two positions so they have a staff of 28 at the moment.

The jail has a capacity of 120 and before the COVID-19 pandemic hit, the jail was experiencing populations of close to 100 inmates at times. But lately the jail has been around half its capacity housing between 50 and 60 inmates total.