Due to the popular demand from our readers, and extreme excitement created by last week’s TMJ Burger special, we have decided to orchestrate a competition to see who has the best burger in our fine, acclaimed  Meat Paradise.  (For you veggies, go on a bike ride in Boulder, or hike up Manitou Incline for the next few weeks, as the burger competition could get tough.)

Last week, eight local eateries had hamburgers on their menu that were featured in our special edition. 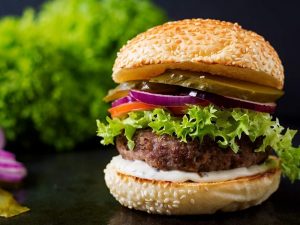 This first of its kind competition will name a winner at the end of September and the winner of the region’s best burger will be featured in the Fall Gaming Guide and Anniversary special that comes out on Tuesday September 29.

Until then, voters in the area have a few weeks to frequent each of the featured eateries and try their burgers to efficiently formulate a vote.  Don’t be shy about making repeated trips, as it is doubtful you will rival the eating burger-indulging habits of certain Teller staff members, who often act like they haven’t eaten in a month. No names will be mentioned to protect the guilty. But you know who we are.

Voting can be done online at the MountainJackpot.com, our Facebook page, or by sending an e-mail to editor@mountainjackpot.com with your vote. We will be taking votes on our website and e-mail until Friday September 25.

The winner of this contest will receive bragging rights for the rest of the year plus an award to display.