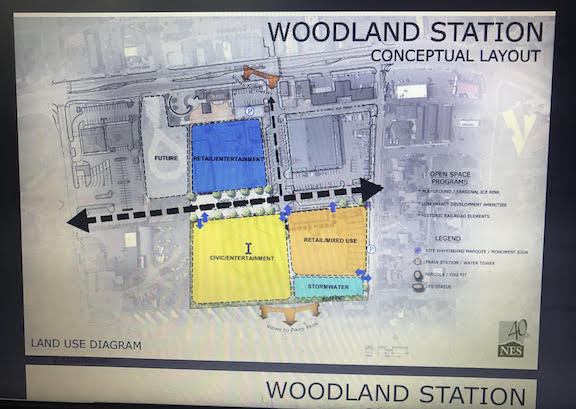 The Downtown Development Authority (DDA) was given a major update on the proposed Woodland Station development at a recent meeting earlier this month.

Developer Mike Williams spoke at length on the proposal, including updated drawings, and some of the amenities  that the project will have associated with it.  These types of details have been lacking in the earlier discussions between the developer and DDA.

Williams began by stating his pleasure working with the DDA. He said, “The DDA has been wonderful to work with in my opinion. I couldn’t have seen anymore impartiality and forthrightness to do things.”

The project at Woodland Station will be developed in multiple successive stages. In its completion it will contain a six-plus acre historically themed development promising good times and special memories for all ages. Its varied offerings will include amenities for everyone with multiple outdoor adventure and discovery activities, year-round entertainment venues inside a Family Entertainment Center, specialty retail, food and beverage service, second floor residences and hospitality housing.

It also will include an event barn, a designated rodeo area, an amphitheater, and multiple Pikes Peak observation points. A key component of The Rendezvous will be an open green space directly behind Bergstrom Park to serve the many colorful festivals and citywide events that already make the various seasons at Woodland Park even more special.

He paid homage to the history and culture of Woodland Park and what inspired him to name the project “The Rendezvous.” Williams cited mountain men, fur trappers, Ute Native Americans, and many others in this area’s rich and colorful history that would set both a time and place to reconnect to negotiate trade and swap goods.

He said, “Here, they would re-supply, while also refueling themselves socially in the company of friends, before continuing on their life’s journey. This area continued to be an important meeting destination as the railroad expanded here, gold and silver brought those seeking fortune, and traders of every imaginable good began to show up to sell their wares. In more recent decades this land was used for cowboys and cowgirls near and far as they joined together in rigorous showmanship to celebrate the western traditions of horsemanship and ranching in the rodeo at Saddle Club.”

Williams lamented the fact that Woodland Park is not seen as a destination town and hopes his project will change that image.

His presentation was met with enthusiasm by DDA board members. Board Member Elijah Murphy said, “The more things that come in here, the better it looks.” Murphy was especially impressed with the planned fence at the southern end of the property, which will look like a “ghost town” and hide the trailer park just south of the property.

The latest proposal marks the most ambitious development effort planned at Woodland Station in some time.  Since the DDA took control of the property, the area has featured many bold planning pursuits, but none have really taken off.

For months, the DDA board has sought to see a more detailed development plan from Mike Williams. Earlier this month, they finally got their wish.

The  board and developer will now get down to the details of making this plan a reality.