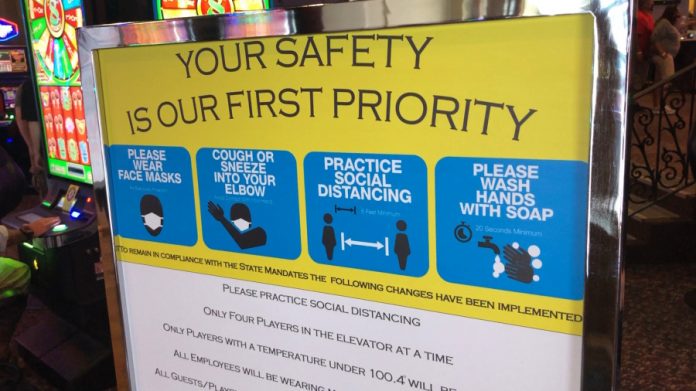 Despite a surge in coronavirus cases in the high country, the southern Teller area is boasting a COVID-19-free zone, even with the reopening of armies of ringing slots and the return to semi-regular business.

In fact, local officials are praising the safety protocols and cleaning procedures used by casino operators. This could play a key role during a state review of a county variance, which set the stage for the reopening of casino activity with more restrictions.

That was one theme stressed at last week’s regular meeting of the Cripple  Creek City Council, as city officials touted the area’s strong record in avoiding the coronavirus pandemic.

epidemic throughout the county, only  10 positive COVID-19 inflictions have been attributed to the Cripple Creek/Victor area, and none have been traced to any of the casinos.

“We really want to thank the casino industry,” said Harris, who served as the interim city administrator for the past five months. Harris said he viewed first-hand the rigorous cleaning standards used by casino operators. “They have done a tremendous amount of cleaning,” he added.

Plus, the city finance chief reported that they have received stellar accounts of casino patron cooperation with the rules. Few casino customers have complained about the face covering rules.

On the downside, Harris gave the grim news regarding the surge in cases in Teller County, which have increased by 195 percent since July 3. He said the vast majority of these have occurred in Woodland Park and the northern part of the county. Woodland Park leads the pack, followed by Divide and Florissant.

With the low volume of COVID-19 activity in Cripple Creek, and with zero cases traced to the casinos, officials are hoping that will play a big factor in the state’s probable review of the county’s variances, which is expected to occur with the rise in cases on a county-wide basis.  The county was granted several  variances from the state restrictions, one of which dealt specifically with the casinos.

“We can really make a case,” said Harris, in explaining the safety progress made by southern Teller and the casino industry in grappling with COVID-19.

Similar views were expressed by Interim City Administrator Ray White, who recently began another part-time stint as the town’s new administrator. As one of his initial priorities, he cited COVID-19 prevention protocol.  That means assuring city hall doesn’t experience any pandemic inflictions.

As a result, he said the city would try to comply with the state’s work at home measures, the mandatory mask and face covering requirements and social distancing. Residents are still urged to participate in meetings virtually and face covering rules will be strictly enforced inside city facilities.

But to date, White said he is quite satisfied with the steps taken by the staff. “They were excellent,” said White, regarding the city’s COVID-19 prevention protocol. He wants to continue that track record. “We are doing everything we can do,” said White.

As for the financial clobbering associated with the coronavirus,  the city administrator conceded the news isn’t good.

According to White, virtually every department  has been financially devastated by the coronavirus.

And the remaining lineup of special events continues to get quite lean and almost non-existent. The city council recently cancelled their biggest festival of the summer, the Salute

to American Veterans Rally. This action occurred shortly after the town’s most traditional festival, Donkey Derby Days, got canned.

And now, the city turned off the lights for any remaining shows at the Butte Theater. Last week, the city canceled their Halloween and Christmas shows, two of the most popular shows aired locally.  Earlier, the city pulled the plug on their summer shows, including a classic melodrama performance.

White stated that the real issue deals with the theater restrictions imposed by the state, making live shows in small venues almost impossible. Due to the social distancing requirements for theaters, the Butte would only be allowed to host maybe 45 patrons, not enough to foot the bill for production costs.

Plus, with the coronavirus surge, additional concerns were raised if a single theater cast member got inflicted by the pandemic.

The city administrator stated that there were just too many COVID-19 roadblocks to allow the city to have professional shows this year at the Butte. The city, though, may try to explore more community-oriented shows in the future.

On the upside, the city was recently awarded a $278,995 grant from the state Department of Transportation, to help pave the way for two new replacement buses for its public transportation pursuit.  The grant pact was outlined last week by Transportation Director Ted Schweitzer.

As part of the deal, the city must come up with a $55,800 match, but it doesn’t have to write the final check until the end of 2022. That’s important, as due to the city’s current financial situation, Cripple Creek can’t come up with the money this year.

In other government news, the council gave the go-ahead for an intergovernmental agreement with the county’s clerk and recorder’s office for the November election. The city is expected to feature a ballot issue during the election, dealing with a local vote on an initiative, which could pave the way for eliminating the current $100 gaming limits on individual wagers and adding new games. A state vote on this question is also expected in November. Proponents of the measure recently submitted petition signatures, totaling more than 200,000 autographs from Colorado voters, more than enough to snag a spot on the ballot.

The city hopes to have the ballot language finalized by later this month.