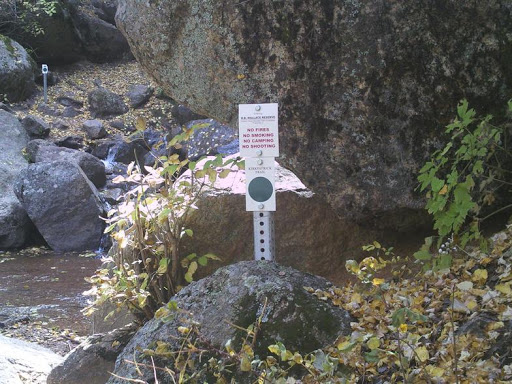 So much for ‘peace, love and understanding’ in the quaint town of Green Mountain Falls, know for its spectacular scenery and outdoor attributes.

While in  most communities  these days COVID-related financial struggles and impacts are commanding main stage attention, that’s not apparently the case in GMF. In fact, the town is encountering a bitter internal fight over one of its biggest assets: local trails and hiking accessibility.

For the third consecutive Board of Trustees meeting, elected leaders, residents and local volunteers in the small Ute Pass town engaged in another fierce lengthy battle  over trails and local committee procedures and GMF rules of conduct.

Verbal fireworks ignited with no shortage of speakers during a Zoom  video conferencing forum last week, with 50-plus attendees.  In the wake of the latest furor, town leaders may face a possible recall effort and questions still persist regarding the future of their trail development activity.

At issue specifically last week was a move by the trustees to remove  Rocco Blasi, the chairman of the former trails committee and a veteran planning commission member, from his current volunteer post. Following a unanimous vote, with one-member abstaining, the board gave Blasi the boot from the planning commission, along with a stern verbal scolding.  “Town staff and the Board of Trustees has continually and patiently attempted to work with Rocco Blasi to create an environment of community inclusion and transparency. At this juncture, it’s clear that all attempts to foster working relations have been met with resistance,” stated Mayor Jane Newberry and Mayor Pro Tem Margaret Peterson, in an official letter, serving as a prelude to Blasi’s abrupt firing. “These matters have taken hundreds of combined hours of staff time, volunteer time, attorney hours and fees, community resources, tax dollars and have disrupted the forward momentum of operations that the town staff and Board of Trustees have worked so hard to achieve.”

“This is not a personal attack,” said Newberry, at the outset of last week’s discussion regarding the removal of Blasi. She proposed ousting Blasi, and giving him a chance to apply for another committee post in six months.  “It is unfortunate. It doesn’t give a lot of heart that anything would get better,” added Newberry.

She conceded that  Blasi has much support in the community, but expressed the biggest concerns over the planning commission member’s continual assaults against Sprang, actions the mayor believes are creating a hostile work environment.

During the last few meetings,  tensions have surfaced between the town manager and Blasi. Some of these deal with the administration’s effort to ax a former trails committee that played  a big role in crafting the current hiking routes that have gained much popularity over the last decade.

Peterson also chimed in and voiced concerns over the adversary stance taken by Blasi. “Where do you draw the line?” she questioned. “I don’t feel like we need to have this ugliness.  We need to get away from this culture…The board feels blindsided. The town staff doesn’t need to be bullied,” she added.

Two other trustees, Katharine Guthrie and Dyani Loo also maintained that while Blasi has been a dedicated volunteer, the rules are the rules. “This isn’t easy for anyone,” said Guthrie.

Trustee Chris Quinn, who abstained from taking a vote on this issue, however painted a different picture. “There were irregularities and  missteps,” admitted Quinn. But that said, he questioned if this constitutes removing a hard-working volunteer from a town committee. “I have heard from various people in town. I don’t see a real need for removal,” said Quinn. Instead, he acknowledged that the “town has hit some rough patches,” and just needs to tighten up its committee rules.

A Personal Vendetta Against the Trails Group

In his defense, Blasi classified the charges as nothing more than a vendetta against him and the former trials committee, and questioned the hundreds of hours that were invested 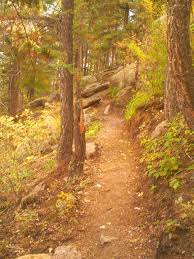 into a campaign to oust him.

Moreover, he cited the strong track record of success established by the former trails committee, first formed in the 1980s, and argued the action to dismantle the group was a “bizarre change.” By taking the removal action, he said the town was opening itself up to a “defamation of character lawsuit. You are asking the wrong person to resign. I want a full retraction of these charges,” said Blasi.

Instead, Blasi indicated the main culprit is Sprang, a town manager he contends has hurt the community. “You need to look for employment elsewhere,” blasted Blasi, during the rebuttal period. He maintained that Sprang’s managership style has completely crippled any sense of transparency and open communication, and hinted that she has attempted to destroy a committee that achieved much success.

In his closing statements, Blasi, who referred to his efforts as that of a community bridge-builder, publicly thanked local residents for their strong support.

The trustees voted 4-0 to remove Blasi, but allow him to reapply for a committee post in six months. Loo, though, made a compromise gesture shortly after this vote. She proposed having Blasi and former trails committee chairman and former mayor Dick Bratton, regarded as the grand-daddy of the GMF trails movement, serve on the newly formed Parks, Recreation and Trails Advisory Board. As  part of this plan, she made it clear that Blasi would have to play a more restricted role than he has in the past.  Loo cited the institutional knowledge Bratton and  Blasi could bring to the table. Her plan, though, wasn’t supported by the trustees who picked two other members last week to serve on the new board.

But following these actions,  the forum exploded with verbal sparks, as many supporters of Blasi, including trail advocates, expressed their dismay with the decision. Several speakers suggested that actions needed to occur to remove several trustees and the town manager. This same theme has been relayed on social media.

In a post-meeting post, resident  Judith Piazza noted, “More than disappointing, this is a breach of leadership and authority in our small town, along with a breach of trust between the public, residents and our community leadership. The Board of Trustees is elected to represent, works on behalf of, and protect our residents, yet I am aware of actions on the part of [some in particular] that give evidence of animosity towards some residents, lack of protection for residents, and divisiveness in a small town during a global crisis that calls for united coming together rather than this divisiveness, dishonoring, and abusive actions towards some… This reprimand and call for resignation feels like agendas that are being craftily acted out based on false allegations, lack of integrity, lack of leadership skill, and lack of the ability to embrace difference of opinions as strengthening rather than divisive.”

During public comments, many citizens echoed similar views and lauded Blasi for his commitment. They classified the board’s action as extremely political and one exhibiting favoritism towards property owner Clay Gafford. The  long-time resident launched a  complaint last month against the trails’ group that appeared to get the ball rolling in a plan to eliminate the long-standing committee and to close the Mount Dewey trail for a several-week period.

Several supporters for the  trails committee leader raised concerns about the extensive effort orchestrated to oust Blasi. “I am appalled by your actions,” said one citizen. “Small town government should not be petty.”

According to sources, a possible recall effort is underway with a petition for form review already submitted. Prior to any recall petition getting circulated, the wording must be approved by local election officials. This possible recall plan is targeted against Newberry and Peterson.

However, the town’s effort to fire Blasi does have some proponents, who cite the need for definite rules. “Volunteers are just that, volunteers,” said resident and former trustee Mac Pitrone, at last week’s meeting. And if volunteers don’t like the procedures, “then that’s too bad.”

Pitrone said he favored the board’s recent actions. “The board gets professional advice,” stated the resident, who has questioned the town’s trail expansion efforts.

And for an upcoming recall, Pitrone said, “That doesn’t make a lot of sense.” He urged critics of the current administration to prepare for a future election, scheduled for 2022.

The fate of the former trails committee, which played a huge role in correcting safety hazards, is still in question.  Bratton said the group is considering its  options, including the prospects for forming a trails club. He said the group, which is no longer sanctioned as a GMF committee,  plans to have a meeting this week.

And for the town’s pursuit for a trails’ ambassador program, the mayor made it clear that effort is a definite go. With the help of Susan Davies, the executive director of the Trails and Open Space Coalition in Colorado Springs, and under the supervision of Trustee Loo, the ambassador program is slated to begin soon. This would recruit volunteers to help with a hiker education program, aimed at improving traffic flow, parking and safety and minimizing conflicts between trail users and residents.

This is one positive outcome that emerged from last week’s meeting, and one that didn’t receive any complaints.