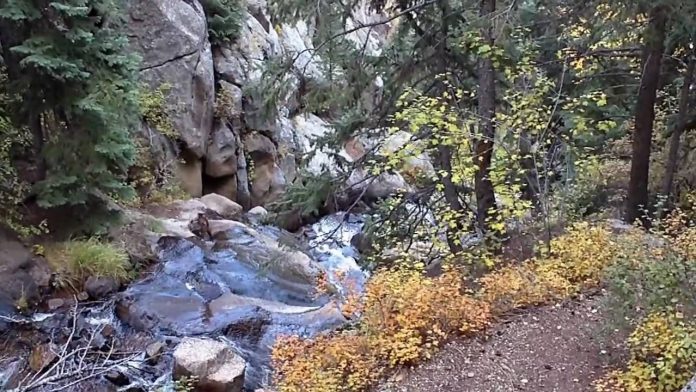 Following pleas from outdoor enthusiasts and volunteers, the Green Mountain Falls  Board of Trustees last week stopped a few steps short of completely shutting down the town’s trail system, often regarded as one of the best in the Pikes Peak region for a small community, due to the coronavirus pandemic.

However, in a big blow to a long-standing committee, formed in 1983, to improve and maintain the current network of local hiking routes, the trustees axed the trails committee as a town-sanctioned group. It also immediately suspended any meeting activity the11-person committee may engage in as a formal and separate town committee.

And the trustees  made it clear that changes are coming in the management of its 12-mile-plus trail system due to problems with crowds, parking, trespassing, parking, loose dogs, trash, limited infrastructure  and other issues,  not to mention the COVID-19 disaster.  Mayor Jane Newberry is asking for solutions.

Although the trustees weren’t quite ready to close the door on public access to their trails and trailheads due to the pandemic, they conceded that action is necessary to curb the current overcrowding situation.

Last week, following a lengthy several hour meeting, via the Zoom video conferencing system, a slew of ideas emerged, such as establishing a trails kiosk center,  limiting trail hiking on the weekends to local residents and charging a parking fee or trail use charge. The online session was quite lively with nearly 50 people participating, and with many public comments.

But at the end of the discussion, the trustees could only agree on one touchy subject: purchasing more town port-a-potties for visitors, as its current public restroom is closed due to the pandemic.

This action was viewed by current trails committee leaders as an outright termination of their group and assault against their mission.

“It is very sad and disappointing to be fired for doing a good job,” said long-time resident Dick Bratton, the vice-chairman of the group, following last week’s decision. He cited safety as the group’s main priority over the last few decades, and touts the countless volunteer hours  that have been invested by committee members into working on local trails. “If it ain’t broken, why fix it? questioned Bratton.

He and other trail committee members questioned the lack of transparency involved, with the plan to shut down the town’s entire trail system not being known until the evening before last week’s meeting.  Members also noted that if their group is getting the shaft, they should have been given the opportunity to comment.

In a formal statement, Rocco Blasi, the chairman of the trails committee, stated, “Nothing about this ordinance was time-critical and yet the affected committees were not afforded the chance to review and comment during our regularly scheduled meetings.  This lack of transparency and due process is concerning.  That said, I don’t think the differences between the town government and trails committee are insurmountable.  Our volunteer trails maintainers stand ready to prevent the community trails becoming ‘loved to death’, as always at no cost to the taxpayer.”

However, the trustees say the trails committee can still operate, but just not as a separate committee sanctioned by the town government. “This doesn’t stop a group from getting together,” said Newberry, who has thrown out the idea of having more of a trails club, instead of a separate trails committee. She even said the new approach could become more “liberating” for the trails group and allow them to work towards developing and maintaining  trails in the entire region, and not just GMF.

In addition, the trustees stated that problems exist with the current independent  direction the current group is pursuing.

“They are a very dedicated group,” said Trustee Katharine Guthrie.   But at the same, she raised a flag out caution against the status quo system, “Because they have been independent, it is not always a good thing.  We need checks and balances. I don’t see that relationship. There are issues coming up.”

Trustee Margaret Peterson went further, suggesting that the current group is not following proper protocol. “This will help us moved forward and stay within the confines of the law.”

But new trustee member Dyani Loo said she fears “alienating volunteers who have worked on the trails.”

One big change with the planned setup is that members of the  new group, recommended by town leaders, would only include residents of the town.

During last week’s meeting, Bratton stressed that the majority of residents enjoy the town’s rich lineup of trails and hiking routes. And he hoped the board’s decision would not kill the current strong social bond that has developed among the many volunteers who have put so much work into maintaining these routes.

Closure of All Local Trails Sparks Much Debate

But when it came to adopting Sprang’s proposal to shut down the complete network of GMF trails and trailheads, the elected leaders weren’t quite ready to install a closed sign.

Comments too were quite divided on this issue. Long-time resident Clay Gafford lauded the plan as  a good temporary move, enabling town leaders to develop a long-range and legal trails network.  In a detailed letter he sent the town, Gafford cited Palmer Lake as a good example of a community having problems with overcrowding and the recreational boom from the coronavirus pandemic. He proposed a variety of solutions, ranging from having paid passes for using the trails, limiting the amount of people that can access  the system at one time and developing better parking and infrastructure.

“We see this as a reset point,” said Gafford, a former president of the local chamber of commerce, in discussing the town’s resolution to close down all of its trails. Gafford’s comments at a previous meeting regarding trails’ issues prompted the town to shut down the Mount Dewey trail and associated side routes.

Resident Mac Pitrone echoed similar comments and praised the board for recognizing a problem “You are working to protect the town’s people and the taxpayers. The board had to do something.”

He noted that past boards hadn’t always acted in the best interests of town residents.

The trustees themselves also raised concerns about enforcement of such stern action, calling for a complete closure of all trails and trailheads. But Sprang responded that the town could use funds it receives from the CARES (Coronavirus Aid, Relief and Economic Security) Act to pay for officers to enforce the closure action.

Bratton asked that at the very least, trail passes be given to local residents. “That (a complete closure of trails for everyone) is not going to go over very well,” said the founder of the trails committee.

Nevertheless, with no viable alternate  plans  the trustees appeared ready to close down the trails on a temporary basis near the close of last week’s session.

However, one of the deciding cautionary factors emerged with comments from Jesse Stroope, a key representative of the Green Mountain Falls Historic  Foundation and the Green Box Arts Festival.

Stroope said their organization would be willing to work with town officials in setting up a designated parking lot for trail users at the old Joyland Church property, and could help man an informational kiosk, educating hikers about what is expected of them.

Plus, he warned that the closure action the town is proposing would have a negative impact on local restaurants and lodging and area businesses.  And if it took such action, then the Gazebo Lake park would have to get shut down too, as this area would serve as more of a threat for social distancing requirements, noted Stroope.

With no immediate solution in sight, the trustees opted to continue discussion on their proposed resolution to shut down all local trails. This will occur on either July 21 or August 4. “We need help with solutions,” said Peterson. “We are trying to do the right thing.”

On a less controversial subject, Peterson, who serves on the Bronc Day Committee, stated that the annual festival is a go, but with a more scaled down approach. The Bronc Day is slated for July 25. The parade will turn into more of a small walking event, with limited entrees.  Vendors also will be limited.

In essence, it will become more of a community event, explained Peterson.

However, games will occur in the park and the flavor of the event will be retained “We want to be safe and keep our tradition going,” said Peterson.

GMF Marshal Virgil Hodges urged the Bronc Day group to try to emulate what Stroope did in handling the Green Box Arts Festival party on July 4.