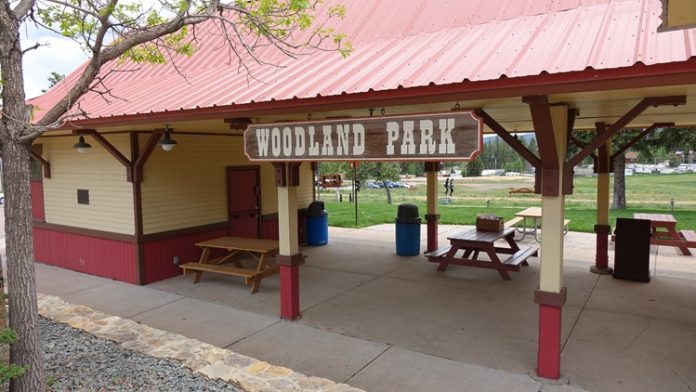 Last Tuesday the Downtown Development Authority (DDA) held a work session to discuss economic development within the DDA district and throughout the city.

This was the first time the DDA held a meeting outdoors on the Woodland Station property.

Donnie Beson was their guest speaker. Beson gave a presentation on his thoughts on how to improve tourism and boost economic activity in the city. He stressed the need for partnership between Main Street, the Woodland City Council and Chamber of Commerce and the DDA.

Beson said, “We don’t have tourism. We have traffic.” He insisted the business organizations must cooperate in a plan to increase tourism in the city.

Beson mentioned Wikipedia as a tool to help build a better understanding of what Woodland Park has to offer visitors. Anyone can go on Wikipedia and change or add to what is on the site. He suggested a plan to add tourist specific entries on Wikipedia that highlight the attractiveness of Woodland Park as a destination, not just a speed bump on the way to somewhere else.

Beson went on to recommend several ways to get the city to attract tourists. He suggested using Woodland Station as an event center, until it is developed commercially.

One way he believes this can occur is by having the KBC radio station KBCO do some live broadcasting from the site. Other suggestions included bringing name musical acts, exploiting the fact that the weather here is much cooler in summertime to get people out of the heat in Colorado Springs.

His other marketing ideas included contacting corporations to donate money through their community outreach programs in order to pay for some efforts to attract more tourists and and pay for some entertainment.

He said, “All of our boards of directors need to be energized to move forward.”

Planning Director Sally Riley commented on these plans, stating, “The city council did add a plan in the strategic plan last year that Woodland Park is to become a destination community. It has been in place for over a year, and there is a group that includes the chamber, Main Street, and I think the DDA too that is working on the tourism plan.”

Case resigned as city council liaison to the DDA board of directors. It should be noted however, that Case was not a welcome addition to the board by fellow board members. According to key board leaders, she was opposed to the DDA as an organization and was frequently absent at many meetings.