While the coronavirus has devastated much of the local economy, it’s been a prime time for mining, with soaring gold prices and many expansion pursuits in the Cripple Creek/Victor district.

Melissa Harmon, the new CC&V general manager, introduced herself and made it clear that times are booming with the gold mine. Harmon stated that their current active operations, bordering the city of Cripple Creek and Poverty Gulch, will become a regular fixture for the next seven years.

More specifically, she  told the council that their current Globe Hill, North Cresson and Schist Island  operations, which can be viewed partially from the Heritage Center, will 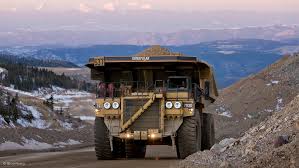 continue at a steady rate until 2027. “It will be pretty consistent,” said Harmon, regarding the mining activity near  Cripple Creek.

She said the company has strived to minimize the impacts by dust control, blasting and noise controls, and making sold efforts to support the local economy.

Extensive tree removal work, along a 25-acre area, will occur in 2020 and 2021 in preparation for mining east of Cripple Creek. Firewood obtained from the tree removals will be available to the community, noted Harmon.

The actual mining work near Cripple Creek is part of a previous permit. CC&V held a variety of public meetings with area residents for the last several years, and didn’t receive that much opposition, other than isolated noise complaints.

As for this year, Harmon estimates the company is on schedule to mine 283,000 ounces of gold. “We are pretty optimistic about reaching that goal,” said the CC&V general manager.

The big future project that has commanded much interest deals with an ambitious underground mining project.  Exploratory work is scheduled to start soon on an effort 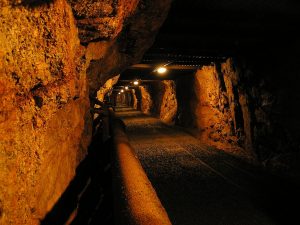 that would greatly increase the life span of the Cresson operation. Otherwise, the life of the mine will expire in 2027, with a complete closure date, following reclamation, set at 2042.

However, CC&V officials are cautiously optimistic about the prospects of an underground operation, with state-of-the art equipment, aimed at plying out high-grade gold beneath the Cresson pit. “We want to pick up what the (old-time) miners left behind,” said Harmon.  CC&V has received the go-ahead from the Newmont company for the early stages of the exploratory work.

During presentations last summer, company officials outlined a plan calling for a portal (an underground horizontal surface entrance) for underground operations, located near the bottom of CC&V’s main. Cresson surface mine at an elevation of approximately 9,000 feet. The plan would explore a number of geological targets that have the potential for gold bearing ore. The main focus will involve areas where historic mining originally occurred at the 8,000-foot elevation zone.

But the price tag is not cheap. The exploratory stages alone could cost the company more than $26 million. The entire project could exceed hundreds of millions of dollars in costs.

The company also plans to pursue Amendment 13, which is mostly a technical addition, allowing the company to pursue a much larger valley leach field expansion and perform work to facilitate their overall operations. “It helps us facilitate a closure plan,” said Harmon.

The amendment won’t establish any more mining projects near Cripple Creek, according to CC&V officials. The company would have to obtain the approval of the  Teller County commissioners for the amendment to move forward. Plans will be submitted to the Teller County Planning Department in the near future.

work and community support in all the areas in which they are involved or do business.

A portion of this money will benefit entities in Teller, Park and Fremont counties, where most of their employees live. For example, the city of Cripple Creek recently received $15,000.

Other big beneficiaries have been the schools and the  Aspen Mine Center.