As a result of recent actions taken by the Teller County Health Department against local bars and restaurants, hundreds of local citizens protested these decisions in two separate highly publicized events.

The main message conveyed: reopen Teller County and all local businesses, now, and don’t deny us our constitutional rights.

The first event was held last Thursday at Russ’ Place in Divide, and the second

On May 14, a crowd of more than 100 locals showed up at Russ’ Place bar and restaurant in Divide to protest the fact that the business recently received a cease and desist order from the county officials. Many were outraged over the tone of the letter, and decided to launch a public protest to support Russ’ Place and all local restaurants.

After hearing the news, the owners of Russ’ Place decided to shut down their establishment and offer drinks, burgers, and hot dogs on a donation basis only for the protesters that showed up to support their nearly decade-old business. “What we are doing right now is not about us it is about Teller County,” the restaurant’s co-owner Russ Kerr said.

During the event, several people from different counties, including many who are running for political office in Teller, Park, and Chaffee counties, made appearances at the event. The protesters could be seen toting American flags and pro-freedom signs.

“As a retired law enforcement officer, I understand what our rights are and what we can and can’t do,” event attendee Doug Monroe said. “And I support Bob Kerr and I support Russ’ Place 100 percent.”

Teller County Sheriff Jason Mikesell made an appearance and was seen shaking several hands with some of the protesters. Mikesell said that the rules the county has been forced to follow came directly from the state, and he wants local businesses to comply with these regulations.   At the same time, he did not believe that it was within his authority to stop any sort of peaceful protest or assembly because such actions were protected by the U.S. Constitution.

“It’s their First Amendment right to have anything they want to hold,” Mikesell said at the Russ’ protest. “At the end of the day how is the governor going to do anything to stop them? I can’t and I won’t.”

Another peaceful protest took place last Saturday starting at 9 a.m. at the Woodland Station property in the downtown part of the city. The event was led by Deanne Garman and it started with her saying a prayer on a PA system at Bert Bergstrom Park. 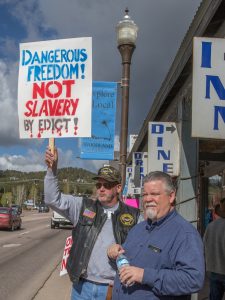 During the Saturday morning event, several people showed up holding signs on the sides of Hwy. 24. Many of the signs said, “Open up Teller County” and other ones relayed messages about freedom.

Many cars driving by on the Hwy. 24 honked in support of the protesters, including Woodland Park police cars and local ambulances. After an hour or so, nearly 100 people could be seen in front of the Historic Ute Inn and Bert Bergstrom Park.

“We must live by the rule of law in this nation, that is true,” Teller citizen Keith McKim said during the protest. “But we can’t forget that the main law, the only law, is the (U.S.) constitution. Everything else emanates from that, they are violating our laws and our rights.”

The Historic Ute Inn had their doors open and they were giving away coffee and donuts, but they were not open for food or alcohol sales. Many came out to support the local restaurant since it has been closed for two months. 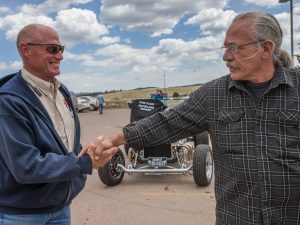 “We are not looking at this as a protest, we are looking at this as an ‘Open Colorado’ rally for the state,” said Elijah Murphy, the co-owner of the Historic Ute Inn. Moreover, he stressed the difficult economic conditions that many businesses face.

“We have a lot to give up here in this mountain town and unfortunately our elected officials don’t understand how our economy works out here. It is coming into the summer and we have already lost businesses. If we are not open by Memorial Day and we are not open 100 percent for business during the summer, then we will see even more businesses fall down. We need to ask Governor Jared Polis to open up the state.”

Candidates running for political office made an appearance, as well as Mikesell. The sheriff appeared at both protest events to show support for the citizens’  First Amendment rights.

“One of the reasons I am here is because it is a peaceful protest,” Mikesell said last Saturday. “I think that it is important right now that people know that peaceful protests are going to happen; it is the right to assemble. And I want them to know 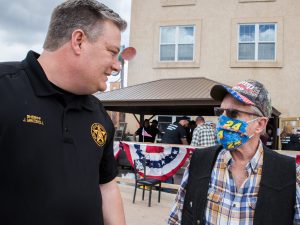 Mikesell said that he hopes the governor will pass the county’s variance request and allow businesses to reopen soon. “I will tell you that the commissioners spent a lot of hours trying to get the variance through,” Mikesell said. “I know we have one of the most aggressive variances asking for casinos and churches and everyone else to be fully open. Honestly, it was impressive to me that they wrote an 80-page variance and they did such a great job in doing it. I think that what they did was the right thing so I am hopeful that the variance gets approved.”