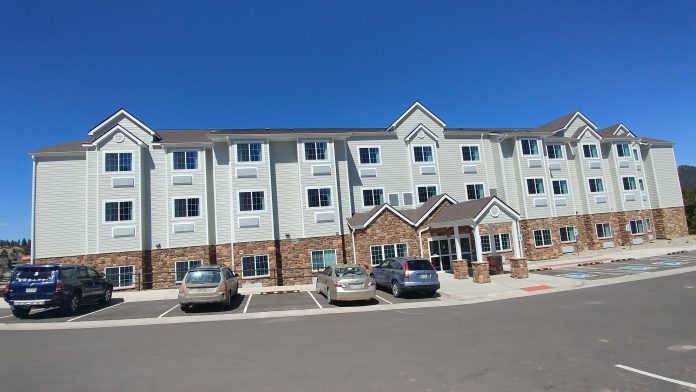 After a construction process that lasted for more than three years, the Microtel by Wyndham lodging facility officially opened up for business last week.

Woodland Park’s newest hotel located on the west side of town next to the Country Lodge welcomed the public with a brand-new establishment, intended to bring more people into the city to stay.

The newly opened facility has 62 rooms and other accommodations. Upon walking into 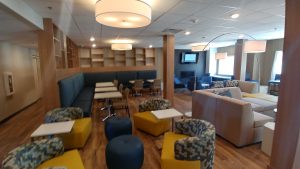 the building, visitors can see a good-sized, new age-style lobby that hosts several seating areas with tables as well as a flat-screen television mounted on the wall. Next to the front desk and adjacent to the lobby lies another seating area with tables tops and plugins, designed for the on-the-go professionals.

Also next to the lobby is an ideal meeting room that can be rented out for events. Plus, the area can expand to their breakfast bar where guests can enjoy a quality food set-up. The building encompasses three stories, with the top two floors offering stellar views of Pikes Peak.

The new facility has a fitness center and a guest laundry room. According to owner Mark Rebaut, guests at the Country Lodge and the new Microtel will be able to share certain 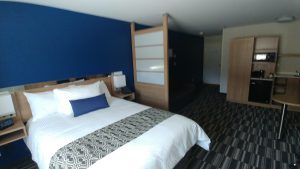 Rebaut said that the addition of the new hotel helps add to his greater plan of becoming Woodland Park’s only resort and helping the town’s efforts to become more of a destination spot than just a pass-through town. “One of the things I have been thinking about is, ‘how can I make it become a destination, how can we become the Woodland Park resort or something?’” the new hotel’s owner said. “Maybe we can blend them with landscaping to where the second you pull off of Highway 24 you know that you are coming into someplace special. That’s kind of my dream I just don’t know if it makes sense yet or not.”

The new Microtel project also was a byproduct of one of the more successful tax increment financing deals made between the hotel owners and the Downtown Development Authority.

Rebaut also said that he wasn’t sure if taking a gamble and opening up for business during the COVID-19 pandemic was the right step. He said that he considered waiting until restrictions were released to open because the area currently has lower levels of traffic than normal.

However, despite the surprisingly slow season during the pandemic, the new Microtel is up and running and ready for business. Even though the area is slow and the tourist season has not quite hit full throttle, the new hotel has still experienced a fair number of guests.