The COVID-19 outbreak has thrown a wrench in the normal day activities of most humans.  But how has the pandemic affected growing herds of our four-legged residents?

According to several local experts, the impact of the virus on pets and animals has actually been more of a positive one since their owners are now home with them. 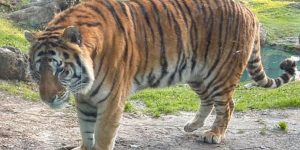 COVID-19 disease. In the United States, there has been one case of a tiger at a zoo testing positive, and there have been a few cases across the world where dogs and cats have tested positive for the novel coronavirus.

However, in all of the cases where dogs and cats have tested positive for the virus, their human owners also tested positive and the animals showed no symptoms of having the ailment. In Hong Kong, a test was done where they tested several cats and dogs that had owners who contracted the virus, and only two dogs tested positive and they did not show any sort of symptoms. Therefore, it is not believed that humans can get the virus from pets, and if they do pass it to them, the animals are not having the same respiratory problems as humans.

So, it is safe to say that at least locally, the pandemic has had a positive effect on pets and other animals. According to Lars Freeman of Blue’s Pet Market in Woodland Park, the business has seen an increase of pet owners buying supplies for their pets.

“Everybody is at home now with their pets so they are getting more walks,” Freeman said. “I have seen more dogs in the neighborhood getting walks and stuff like that. It seems like 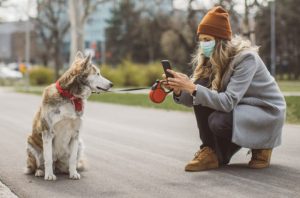 Freeman also said that their grooming and washing services are currently closed so pet owners have been taking those tasks in their own hands. He said that the store has been selling more shampoos and grooming products recently than it was before the virus outbreak.

It has been in the news that across the country more people have been adopting dogs at such a high rate that many shelters are running out of animals. According to Angie Davis, executive director of the Teller County Regional Animal Shelter (TCRAS), the local shelter does still have pets available, but adoptions have been on the rise.

“We have had a really good run on adoptions, so that has been amazing,” Davis said. “And of course, we have kept our numbers down low because we never know when the county needs to start pulling animals out of homes. So that has put us in a different format just because we are used to having a bunch of animals here and right now, we are low on numbers. So, we have fostered out the animals that we could foster out and we’re not doing a lot of heavy intakes at this time.”

Davis said  one negative effect from the pandemic is the fact that the shelter is limited on how many animals they can take in right now. “It has affected the transfer program because we were helping shelters that were in the southern part of the United States that are doing a lot of euthanasia and we were taking on some of their animals,” the animal shelter’s director said. “That has stopped since all of this has happened, which is sad for them because now they have to go back to making those hard choices having to do with euthanasia.”

However, for the most part, Davis said that she thinks animals are taking the current pandemic better than humans. She said that since pets are pack animals, they like being with their owners and getting to spend more time with them.

In Cripple Creek, the donkeys have still been in their pasture for now in the outskirts of town, and not much has changed in their lifestyles. According to Clinton Cline of the Two Mile High Club, the organization that informally cares for the donkeys in Cripple Creek, the animals will still be let loose to roam the town when the weather starts to warm up in mid-May, and nothing will change for them.

“We are not planning on changing anything,” Cline said. “Once the snow kind of melts up 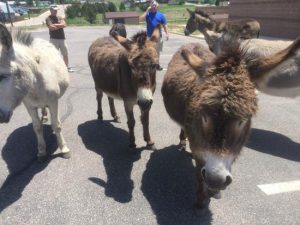 here and we stop getting snow storms and then the grass turns green, they will have plenty to eat in town. Right now, there is nothing that shows that donkeys can get COVID-19.”

As of now, the only change for the donkeys is that they have been seeing more visitors come to their pin located just outside of the downtown area. “All they know is that they have been getting a lot of visitors with apples and carrots,” Cline said. “A couple of years ago we built a viewing platform and a feeding area for people that want to come out and take pictures and feed them. There is a little platform you can walk up on and when somebody pulls up their car and parks near the platform the donkeys know what they are there for. They will come out of their barn and come from being down on the lower area of their pasture and they know they are going to get apples, carrots, or the donkey treats that all of the stores in town have.”