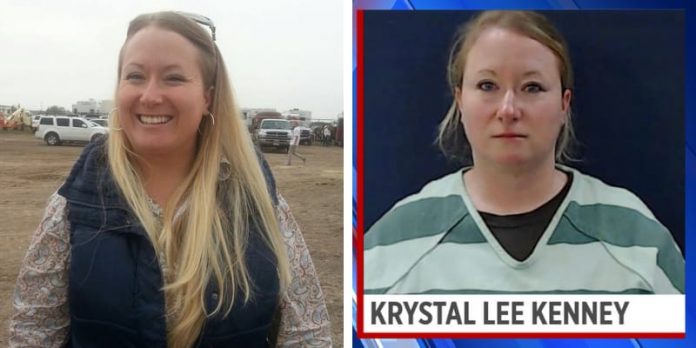 Last week, law enforcement officials reported that Patrick Frazee’s former mistress and murder accomplice, Krystal Lee Kenney, dubbed by some locals and media outlets as the “Mistress of Death,”  was being considered for getting out of jail and sent into the state’s community corrections system.

Also known as the “COMCOR” community corrections, this is a halfway house where prisoners can get transferred if they meet certain requirements. And, eventually, they can get released on an ankle monitoring system where they are allowed to live outside the halfway house.

After her sentencing last January, District Attorney Dan May said that he “made a deal with the devil” when he gave her the plea bargain for her testimony that successfully convicted Frazee for first-degree murder for the brutal killing of Kelsey Berreth. In exchange for her testimony, Kenney pleaded guilty to tampering with evidence when she took Berreth’s phone to Idaho and destroyed it.

As soon as the announcement was made public last week, May and Senior Deputy District Attorney Jennifer Viehman issued a letter that voiced their strong opposition to Kenney being transferred into the community corrections system.

“Ms. Kenney deserves to spend every day of her three-year sentence in the Department of Corrections, but we are cognizant of the fact she will not serve that entire sentence, day for day, in the Denver Woman’s Correctional Facility,” the district attorney’s office’s objection letter read. “She should, however, serve more than two months. She should serve her full sentence in DOC until she paroles from DOC. Serving two months out of a three-year sentence for what she did is simply unconscious able.