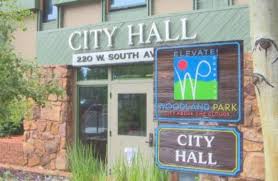 Even with concerns raging about the Coronavirus scare, a packed house crowed into last Wednesday’s candidates’ forum in the Woodland Park Council Chambers.

The event, a regular tradition, was sponsored by the Woodland Park Chamber of Commerce.

Each candidate was given two minutes to introduce themselves to the audience. After introductions, former Councilwoman Carrol Harvey directed a series of questions at individual candidates, and to the candidates at large.

Harvey’s questions touched on such subjects as affordable housing, what candidates would do if elected, the city’s budget and debt, and the Downtown Development Authority (DDA).

Candidates answered all questions to the best of their ability and knowledge. Nine candidates are vying for a mayor’s spot and three council position. A record four candidates are in the run for the mayor’s seat.

Some of the most interesting discussion centered around housing, the DDA, and the budget. Councilwoman Case fielded questions about the budget as did several other candidates.

Candidate Jim Pfaff emphasized the importance of limited government. Candidate Michael Dalton expressed his views that the DDA should be abolished. Candidate Rusty Neal spoke of his desire to review the city’s codes and zoning. Both Councilman Noel Sawyer and Mayor Pro Tem Val Carr leaned on their experience as significant reasons to vote for them.

Public input on council happenings was another heavily discussed subject. All the candidates agreed that they must figure out a way to include the public in civic matters. Candidate Don Dezellem suggested coffee meetings with the public.

The issue of addressing the  city’s debt is another big subject that stirred much discussion.  Candidate Pfaff scolded previous councils for allowing the debt to accumulate to such a high level. Other office contenders took a more sober approach, noting that how we got here is not as important as how we pay off the debt.

Council has discussed this issue on numerous occasions. Unfortunately, the reality is the council can only set aside a lump sum of money to pay down the debt, but cannot apply that money until December 1, 2025 because of how the debt is structured.

At the end of the forum, each candidate was given two minutes for a closing statement. The candidate forum extended for several hours due to so many contenders for office.

The election is scheduled  for April 7.