The city of Cripple Creek has continued its revolving door syndrome when it comes to head town bosses.

In fact, if you are a city manager in the Creek, you better have a suitcase already packed and one foot out the door.

Last week, the city council shut the door on the town’s first-ever town administrator from the Land of Ire.

Mark Campbell, one of the town’s more colorful city administrators, known for his strong Irish accent and unique yarns, and the council parted ways. This development has shocked many local business operators and residents, with mixed opinions rendered both pro and con. 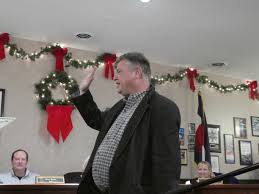 “The inmates are running the asylum,” said one former civic leader, who heavily supported Campbell and his management style and willingness to get things done. Other leaders, though, contend the new change could result in better professionalism and smoother relations between the staff and administration.

The decision occurred early last week, as Campbell was told by the mayor and mayor pro tem the city wanted to embark on a new direction. He agreed to tender his resignation. As a result, Campbell, who worked with the city since Dec. 2018, will receive a six-month salary severance package.

“At the end of the day, it just wasn’t a good fit,” said Councilwoman and former mayoral candidate Meghan Rozell, who was one of the council members who supported the change. One problem initially involved in the hiring of Campbell was that he came on board, following a close 3-2 vote over another applicant from Crested Butte.

And with the November election of 2019, slight changes occurred with the city’s lineup of elected leaders.

With the resignation of Campbell, the city will now undertake a national search for a new head administrator, a process that could take months. “We want to take our time and do this right,” said Mayor Milford Ashworth. “This will be my third city administrator, “quipped the mayor, who served with the council during another eight-year stretch.

In fact, since 2005, the town has sported approximately seven interim or full-time city bosses, leading their operations. Until the council finds a new head boss, Finance Director Paul Harris will serve as the interim administrator, according to Ashworth.

Despite the big change and political fireworks, the actual separation process was fairly uneventful last week. In a brief statement, Campbell said, “It was my great pleasure to serve the people of Cripple Creek.”

He sat briefly in the audience at last week’s meeting, while the council approved his separation pact.

A short but productive track record

In a later interview, Campbell believes he accomplished much during his nearly 14-month stint with Cripple Creek.

“I believe I had good support among the citizens, business people and the casino owners. I really enjoyed the people of Cripple Creek,” he said.

More specifically, Campbell cited his ability to spearhead the pocket park project next to city hall. The pocket park, adorned with a mural with a historic theme, will house regular 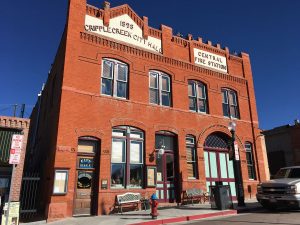 musical acts every Saturday this summer as part of a way to welcome visitors to the community. This was one project the former administrator took pride in, and he was often seen pacing the grounds of the park and talking with contractors, residents, business folks and even journalists there.

Campbell said the city also moved forward on a number of key grants, such as a shelter for the pocket park, a $500,000-plus grant for Community of Caring to help the organization house services at the former Madame June’s building and other financial awards.

Campbell also cited his leadership in the housing feasibility study as big plus for the community. He believes he made strides in getting Victor on board and getting the first realistic look into the community’s housing scenario.

Campbell also was the first town administrator in nearly 20 years who lived in Cripple Creek. He gained quite a reputation too for his colorful stories, strong Irish accent and musical performances in Victor. In addition, he was a big hit for several television stations during the Patrick Frazee trial in rattling off stories about Cripple Creek’s past.

The former administrator grew up in Northern Ireland in the 1970s and 80s, around the time of considerable turmoil in the region, with frequent clashes between the Irish Republican Army and the British and a variety of military groups. Tragic incidents, such as “Bloody Sunday” and the “Ballymurphy Massacres,” still linger in his memory.

“I really don’t have any fears,” said Campbell, in recalling his youth and teen years in Northern Ireland during a previous interview. “I saw a lot of bad things. You learn a different sense of normalcy…I learned to fight.”

Campbell came to the United States in the early 1990s and attended college in Cleveland and obtained a Master of Public Administration, with an economic development emphasis from Cleveland State University.

Campbell embarked on a career as a government administrator, with stints in Montana and Missouri, where he became the head boss for LaGrange, Missouri, a gambling town. He eventually came to Colorado to assume the managerial ropes of Kremmling, a tourist area about 50 miles from Steamboat Springs.

During his five years there, Campbell played a lead role in upping sales tax revenue by helping to promote tourism and events and increasing retail businesses.  Campbell said one of the main steps he and other leaders took was to improve the highway situation in the area by reducing the lanes coming into Kremmling.

He was a finalist in several key town administrator jobs before taking the position in Cripple Creek in late 2018.

What Now For Cripple Creek?

Ashworth, following last week’s council meeting, said the town now will embark on a detailed search for a head administrator. He indicated more emphasis would be placed on getting an individual who will stay for a longer period. “We want to make sure we have a really good fit. I believe we have a lot of opportunities here.” At the same time, the mayor realizes city administrators don’t last that long in the communities they serve. “They are almost like a company’s CEO,” said Ashworth.

From his perspective, the mayor would like the city’s new boss to take a key role in addressing the housing issue. “Housing is a big thing. We really want to attract families up here and have more housing for gaming employees.”  He also cites outdoor recreation as a big potential bonus in the community that hasn’t been marketed and promoted much.

From her perspective, Rozell, who challenged Ashworth in the last mayor’s race, wants to see more teamwork and to facilitate more indoor activities for families. One change she would like to see implemented in the hiring process is to have the council try to reach a unanimous decision on the next town administrator pick.

Campbell, despite his short stint with Cripple Creek, agrees that the town has much potential in becoming more of a destination area.