Let’s start with a few firsts. This is the first Super Bowl in history to have two teams whose primary color is red. The stands will be a red sea of fans on both sides. Only with the cheering on big plays will you be able to tell who is rooting for who. Okay, if you look hard enough, maybe you can see a team logo. Make no mistake, when the Chiefs are on 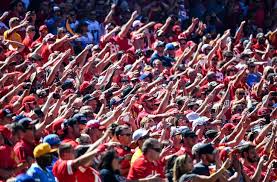 a roll you’ll hear the unmistakable “Tomahawk Chop” chant loud and clear. For the record, the Chiefs will wear their home red jerseys, while the Niners will be sporting their away white jerseys and gold pants.

First number two: Sarah Thomas will be the first female official to appear in a Super Bowl. She is also the first openly gay person to officiate a Super Bowl.

First number three: This is the first time these two teams ever met in a Super Bowl. Not so hard to believe since the Chiefs haven’t been to the big game in 50 years. The Chiefs rank behind only the Detroit Lions and the New York Jets for the longest Super Bowl drought in the NFL. Okay, the tommy choppers played in Super Bowl I, but they got their jocks handed to them by the Packer, 35-10.

One more little ditty that isn’t a first, but is a second ever. It’s just the second Super Bowl ever between a team that led its conference in rushing yards and one that led in passing yards (Super Bowl VI was the other). The 49ers rushed for 2,305 yards, and the Chiefs gained 4,498 through the air this season.

Enough with the first evers, on to the nitty gritty.

Here’s a look at the strengths of each team. The Chiefs biggest asset is quarterback, Patrick Mahomes. Mahomes’ postseason run with the Chiefs has been nothing short of incredible. In the post season he’s 46 of 70 for 615 yards with eight touchdowns and zero interceptions with a 131.6 passer rating. He’s the first player in NFL history to start his postseason career with 10-plus touchdown passes before his first interception. Mahomes is the first player in NFL history with 250-plus passing yards and 50-plus rushing yards in back-to-back playoff games, and joined Joe Montana (1984) as the only players with 250-plus pass yards, 3-plus pass touchdowns, and 50-plus rush yards in multiple career playoff games.

The Chiefs love to pass. Mahomes has Tyreek Hill, the fastest player in the NFL, to throw to at wide receiver. Hill didn’t make many explosive plays against the Titans in the AFC Championship game and finished averaging a middling 13.5 yards per catch. He made up for his lack of yardage by doing damage in the red zone, including touchdown grabs of eight and 20 yards in the first half.

Tight End, Travis Kelce is Mahomes’ go to guy on third down. Kelce has racked up 1229 yards and 5 TD’s this year. He, like Hill, didn’t do much against the Titans in the championship game, but he didn’t have to. Against the Titans, the Chiefs ran the ball 27 times for 112 yards and 2 TD’s.

Perhaps the biggest advantage the Chiefs have in this game is their unpredictability. The Niners are going to have a tough time trying to figure out when the Chiefs are going with the pass or the run.

The Chief defense is much improved since the beginning of the season. Frank Clark and Chris Jones have become a quarterback’s worst nightmare. They are both game wreckers in the pass rush. When they’re not making sacks, they’re batting balls and hurrying the passer.

Against the Titans the Chief defense held Derrick Henry to 69 yards on 16 carries. This is another advantage for the Chiefs, since the Niners like to run the ball.

Now for the Niners.

It’s hard to say anything stands out as a strength with the Niners. They run the ball and then they run the ball some more. It’s worked for them all season, and as the legendary Bill Belichick always says, “We’ll keep doing what we’re doing until they can stop it.”

Perhaps the biggest strength for the Niners is their defense. Joey Bosa heads up that department. Bosa has 11 sacks this season and like Clark is a game wrecker with his pass rush. If the Niners are going to make this a game, they’ll have to get after Mahomes early and often. It worked against the Packers in the NFC Championship game, but Mahomes is a different kind of animal than Rodgers.

The Niners will have to run the ball effectively to beat the Chiefs. Keeping Mahomes on the sideline watching the Niners run the ball and the clock is their best hope for victory. Raheem Mostert is the Niners golden boy running the ball. Mostert rushed for 200 yards on 29 carries and 4 TD’s against the Packers.

A few thoughts on how this will play out.

Mahomes is a killer against a zone defense and the Niners are weak there. If the Niners opt for man-to-man coverage they’ll get killed by the Chiefs speed at wide receiver.

The Niners secondary is the most physical in the NFL, but it remains to be seen if tough beats speed.

If the 49ers can get to Mahomes, either with four up front or a blitz they stand a chance of slowing him down and keeping Kansas City under 30 points.

Unless the Chiefs overload the box, the Niners should have no problem running on the Chiefs. The Chiefs allowed the fourth-most yards per rush after contact this season.

Finally, Garoppolo is going to have to pass the ball whether he likes it or not. If he is successful, this could be the best Super Bowl, since SB50 when the Broncos crushed the Panthers.

All the talking heads and Vegas are giving the Chiefs a modest 1-point advantage to win so far.

I can’t argue with that.