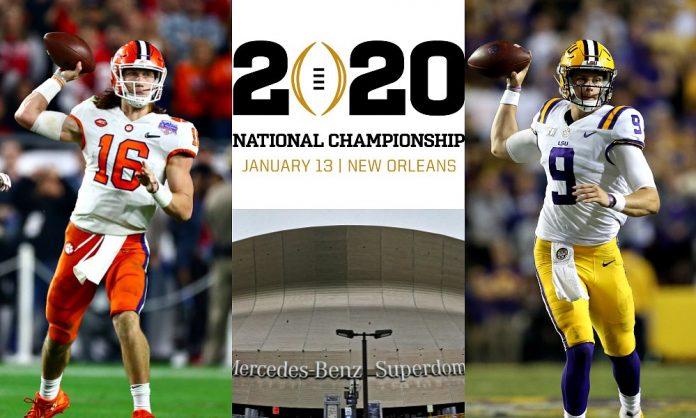 LSU Versus Clemson In Grand Finale

The end of the holiday season can prove to be a sad time for football fans because college and professional seasons come to an end shortly after the New Year.

However, with the newly expanded college bowl schedule, there is still one game left which is the college football playoff national championship game at the Mercedes Benz Superdome in New Orleans, LA.

In order to earn the right to play in the championship game, the two teams had to have had stellar records during the 2019 season and win a bowl game to qualify for the final playoff match. This year, number three ranked Clemson got a seat in the

The game should be a good one to watch considering both teams have yet to lose a match during the 2019 season and have 14-0 records. However, the experts in Las Vegas tend to disagree as the bookies in the famous gambling city favor LSU to win by six and a half points.

LSU would be a good pick especially after putting up 63 points on Oklahoma during their last bowl game. LSU has proved to have an explosive offense and have put 42 or more points on the board in ten out of the 14 games they have played. LSU hasn’t

scored less than 37 points in a game they have played since late October of last year.

LSU quarterback Joe Burrow has had a great season during 2019 and he was good enough to earn this year’s Heisman trophy. During the bowl game against the Sooners, Burrow threw seven touchdown passes just in the first half. The LSU rushing game also played well against Oklahoma as they put up 160 rushing yards during the Peach Bowl which is one thing that could easily help tear down the Clemson defense.

However, Clemson should not be counted out of this one entirely because they too have had an explosive offense this season. The Tigers also won ten out of their 14 games by scoring more than 40 points. Most of the games Clemson won during the 2019 season were landslides where the Tigers easily came out on top.

Even though LSU is favored in Vegas, many think that the game will be an offensive shootout and that the Tigers will give LSU a run for their money. So far this season, LSU has only played one team that had as good of an offense as Clemson and they allowed over 40 points during the game they played against the tough Alabama Crimson Tide offense. The Tigers also have a good running game as during the Fiesta Bowl the team’s running back Travis Etienne ran in the end zone for three touchdowns.

Trevor’s Prediction: I think that the score will be closer than the gurus in Las Vegas think, but that LSU will still come out ahead. The LSU team basically just seems unstoppable this year. After they obliterated Oklahoma, I think most LSU fans were turned into believers. Clemson has a good team as well and I think that it will be a high scoring offensive match that gets settled during the final minutes of the bout. LSU 48, Clemson 41.